AIR OF MYSTERY
[+]Enlarge
Credit: Shutterstock
The precise mechanism of how we smell remains a mystery. 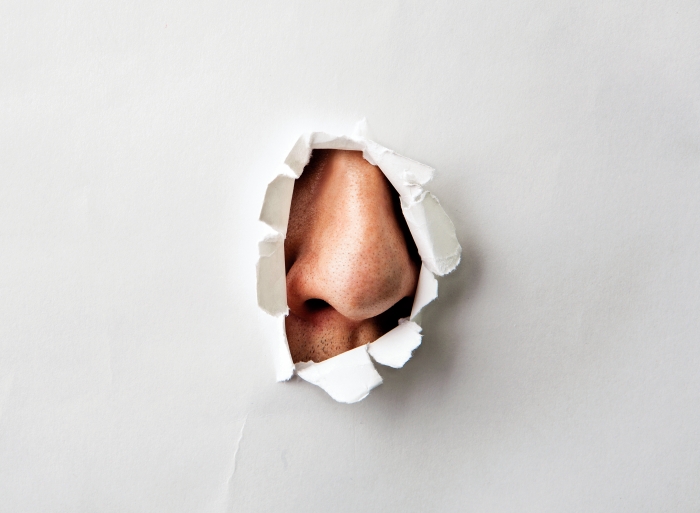 Credit: Shutterstock
The precise mechanism of how we smell remains a mystery.

How exactly our sense of smell works is one of the most important, unanswered questions in sensory science. It’s also a question that has resulted in an acrimonious, nearly two-decade-long controversy.

On one side of the battle are a majority of sensory scientists who argue that our odorant receptors detect specific scent molecules on the basis of their shapes and ­chemical properties. On the other side are a handful of scientists who posit that an odorant receptor detects an odor molecule’s vibrational frequencies.

A new study, led by Eric Block, chemistry professor at the University at Albany, SUNY, takes aim at the ­vibrational theory of olfaction and finds no evidence that olfactory receptors distinguish vibrational states of molecules.

The vibrational theory was first proposed about a century ago, but its modern-day proponent is biophysicist Luca Turin, a visiting professor at Ulm University, in Germany. Block’s new study challenges a 2013 paper by Turin and his colleagues that had given the vibrational field a boost (PLOS One, DOI: 10.1371/journal.pone.0055780). Turin’s 2013 paper reported that human subjects could identify a difference in odor between deuterated and nondeuterated musk molecules, such as normuscone. Human subjects thought the deuterated versions smelled burnt or roasted.

These experiments supported the vibrational model of olfaction because deuteration doesn’t significantly alter the chemical structure of a molecule, yet it does alter its vibrational frequencies. The take-home message of Turin’s 2013 paper was this: If humans are able to smell the difference between deuterated and nondeuterated forms of the same odorant, then vibration could have a role in olfaction.

In the new study, Block and his colleagues prepared deuterated versions of normuscone and other musk molecules. Then they expressed a human musk receptor called OR5AN1 in human embryonic kidney cells, a common cellular system that has been used to study the mechanisms for sight and taste, and evaluated the response of the musk receptor to their array of musk odorants.

The researchers found that the musk receptor did not respond any differently when presented with deuterated and nondeuterated versions of normuscone, muscone, and other musk odorants (Proc. Natl. Acad. Sci. USA 2015, DOI: 10.1073/pnas.1503054112).

“Even though I like underdog ­hypotheses, this is by far the strongest evidence refuting the vibrational hypothesis to date,” says blogger and drug discovery chemist Derek Lowe, who has long followed the olfaction debate on his blog, In the Pipeline. “They ran a lot of good experiments with a lot of care. The vibrational hypothesis had a lot of chances to rear its head, and it didn’t.”

“It’s frankly a sledgehammer to Turin’s vibrational hypothesis,” says Kenneth S. Suslick, a sensory scientist at the University of Illinois, Urbana-Champaign, who has argued for some time against the vibrational olfaction model.

In response, Turin calls the new study “very interesting,” but he does not think it makes a successful case against vibrational theory. In particular, Turin believes that the musk receptor studied by Block and colleagues may not correspond to the one he studied in the noses of human test subjects who differentiated deuterated and nondeuterated versions of normuscone.

“Their entire paper rests on the fact that the musk receptor that they are studying is the same one that the humans were using to perceive the musk in the PLOS paper. Humans have multiple musk receptors,” Turin says. “We just don’t know if it was the right receptor.”

Block says if Turin can point him to another human musk receptor—one that is involved in vibrational olfaction—he’d be happy to study it. Block adds that his team screened a full panel of all the human odor receptors, and of these, only OR5AN1 “robustly responded to musk.”

Another of Turin’s objections is that Block and colleagues did their experiments with cells in a dish rather than within whole organisms. He argues that expressing an olfactory receptor in human embryonic kidney cells doesn’t adequately reconstitute the complex nature of olfaction and is not biologically significant.

Leslie B. Vosshall, a sensory scientist at Rockefeller University, doesn’t accept that argument because scientists have successfully used human embryonic ­kidney cells to study rhodopsin and adrenaline receptors, which are related to olfactory receptors. “Embryonic kidney cells are not identical to the cells in the nose,” she says. “But if you are looking at receptors, it’s the best system in the world.”

Turin thinks that neither side of the debate has totally satisfactory data. On the one hand, “what we have are behavioral tests on flies and on humans,” he says. And on the other hand, there are receptors expressed in cells.

One way to move the field forward would be to solve the crystal structure of an olfactory receptor. Scientists have yet to do so because the receptors are membrane proteins that can’t be expressed in large amounts, Suslick says.

“Smell is a fascinating, beguiling sense, the more so because we don’t really understand how it works,” notes Tim Jacob, emeritus professor in sensory science at Cardiff University, in Wales. “It is a shame that the quest to find a solution to the puzzle of smell, has been distracted by the attempt just to refute the opposing theory.”

“These scientists have paid Luca Turin the compliment of taking the theory seriously,” Lowe says. “When his hypothesis came out a lot of people just brushed it aside as a stupid, annoying idea. And that’s not appropriate.” However, he says, Turin “is the one proposing the more unusual hypothesis, so he’s the one who has to bring the extraordinary evidence to support it.”

Comments
Robert Buntrock (May 12, 2015 4:12 PM)
Even thought there are some discrepancies on the deuterated compound observations, maybe both olfaction mechanisms are operating.
Reply »