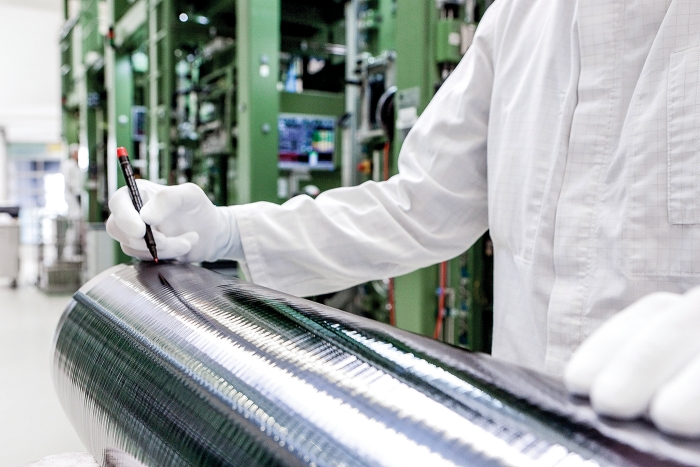 Credit: Shutterstock
A silicon ingot produced by Wacker with the process known as GFZ.

If you have lunch with Rudolf Staudigl, the measured chief executive of Wacker Chemie, the Bavarian chemical producer, don’t expect him to be a barrel of laughs.

It’s been a tough time for Wacker’s polysilicon business, as well as Siltronic, the firm’s silicon wafer subsidiary. Already faced with high capital and energy costs, Wacker and its competitors have had to swallow a huge dip in selling prices for polysilicon and silicon wafers after the market became swamped with supply.

Ask Staudigl to name his favorite in-house R&D project, though, and he will crack a smile. That’s because it is a novel approach for making certain semiconductor wafers that could lead to significant cost savings. Staudigl is optimistic. “It’s a very exciting project,” he tells C&EN.

The standard approach to manufacturing high-purity polycrystalline silicon is the Siemens process. Developed by the German firm Siemens in the 1950s, it involves heating thin silicon rods in large vacuum chambers in the presence of hydrogen and trichlorosilane at 1,100 °C for several days.

When the reaction is complete, the bell-shaped chamber lid is lifted to reveal several tons of high-purity silicon coating the silicon rods. After being smashed into chunks, this polysilicon is then melted and grown into large monocrystalline ingots using a method named after its inventor, the Polish scientist Jan Czochralski. The ingots are sliced to form the silicon wafers used in semiconductors and solar panels.

In recent years, Wacker and some of its competitors have independently developed fluidized-bed deposition techniques as a potentially lower-cost alternative to the Siemens process. Instead of polysilicon chunks, it creates polysilicon granules.

Now Wacker is seeking to use granular polysilicon in a novel approach to make so-called float-zone silicon wafers, which are used to make high-end electronic switches rather than solar panels and semiconductors. The market is growing rapidly and represents a major opportunity, Wacker says. The firm has named its technology the granular float-zone process, or GFZ.

In the standard float-zone process, Siemens polysilicon is melted with an induction coil and grown into a monocrystalline ingot. The crystal is highly pure because surface tension allows it to “float” around a support rod without the need for a containing vessel that might cause contamination. A drawback is the high cost of running the Siemens process. GFZ avoids this by using lower-cost polysilicon granules, according to Hans-Peter Bortner, director of silanes production for Wacker.

Yet several technical challenges must be overcome for the GFZ technology to meet its targets for quality and cost-effectiveness, Wacker says. Although the fluidized-bed approach is economical, the polysilicon granules it yields have higher levels of impurities than do the chunks from the Siemens process. A focus of Wacker’s development of GFZ is reducing these impurities in the final product.

Wacker has begun operating a development reactor at its biggest polysilicon plant, in Burghausen, Germany, dedicated to testing the manufacture of float-zone ingots from granular polysilicon. “We are working on getting the costs down and on reaching the needed product quality,” Bortner says.

Although Wacker says it expects GFZ to become a commercial success, the firm has to date been reluctant to manufacture granular polysilicon at large scale.

Polysilicon granules may yield not only a cheaper route for GFZ but also cheaper commercial production of solar panels. But recent claims by other leading polysilicon producers—including REC Silicon, SunEdison, and GCL-Poly—that they are on track to scale up granular polysilicon production have been met with skepticism by industry analysts.

“While fluidized-bed reactor systems are a proven technology, at this point, polysilicon manufacturers have not proven that it leads to sustainable success in the market,” says Mark Barineau, a solar analyst with Lux Research, a market research firm.

Industry experts estimate that the granular process could reduce the cost of making polysilicon to $10 to $15 per kg compared with $12 to $20 per kg for the latest iterations of the Siemens process. Although granular processes may be the future, right now the Siemens process “is much more reliable and bankable than fluidized-bed reactors,” says Richard M. Winegarner, president of Sage Concepts, a consulting firm with expertise in the polysilicon sector.

A more immediate concern for Wacker, Winegarner points out, is the domination of the silicon sector by Chinese firms potentially propped up and protected by their government. “Wacker’s biggest problem is not being Chinese,” he says. Even if Wacker were to step up its activities relating to granular polysilicon, “I don’t think Siltronic is ever going to be a huge moneymaker,” Winegarner says.

Indeed, the silicon wafer market is such a tough place to do business that Staudigl recently initiated a review to determine whether Wacker should sell Siltronic.

Although GFZ may yet prove to be the exciting commercial technology Staudigl hopes it will be, for Wacker it may be one technology that delivers too little, too late.