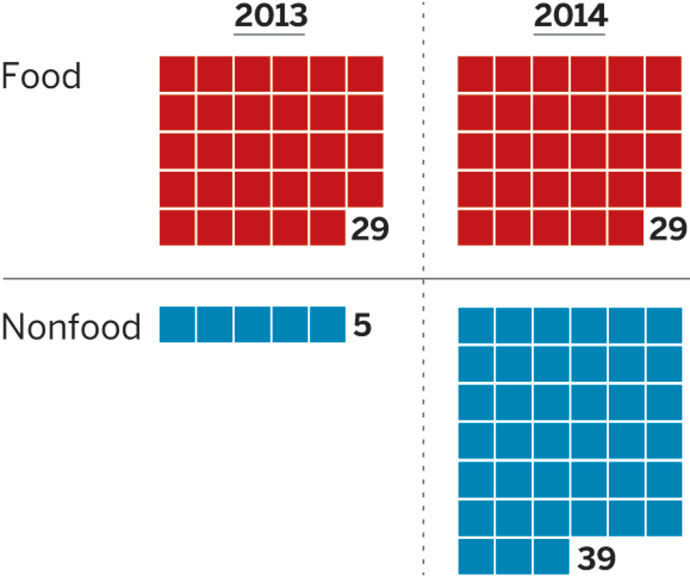 Dramatic rise in requests in 2014 for new inert ingredients in pesticides not used on food raises questions. SOURCE: EPA

Pesticide manufacturers and the Environmental Protection Agency are feeling the heat from consumers and environmental advocacy groups to reveal all of the chemicals in pesticide formulations—and not just the active ingredients that kill insects, rodents, or weeds. Of particular concern are the so-called inert ingredients—chemicals in pesticides that perform functions other than controlling pests.

Examples of inert ingredients are emulsifiers, solvents, aerosols, fragrances, dyes, and other chemicals that are not necessarily benign, say those who are calling for mandatory labeling of inert ingredients in pesticides. Many companies, however, are pushing back against demands for disclosure of such ingredients, saying the information is proprietary.

Much of the concern from advocacy groups centers on the lack of health and safety information about chemicals that are already on the market, particularly those in pesticides that are not used on food. But new data from EPA show a surge of applications in 2014 for regulatory approval of new inert ingredients for nonfood uses.

After these changes, EPA saw a spike in submissions in 2014 from companies seeking approval of new inert ingredients for non-food-use pesticides. This in part led EPA to host a public workshop in December 2014 to improve stakeholders’ understanding of the regulatory approval process for inert pesticide ingredients.

2006 EPA receives two petitions—one from a coalition of advocacy groups led by the Northwest Center for Alternatives to Pesticides and one from 15 state attorneys general—urging the agency to require companies to list inert ingredients on pesticide labels. The petitioners claim that 371 inert ingredients are hazardous to people’s health.

2014 EPA withdraws its 2009 proposed rule and issues a new proposal to remove 72 chemicals from its list of approved inert ingredients, claiming the chemicals are no longer used in pesticides.

EPA rejected a few inert ingredient applications in 2014 because companies selected the wrong category for their submissions, Kerry Leifer, head of the “inerts” team in EPA’s pesticide office, told participants at the workshop. When companies submit deficient applications for approval of a new inert ingredient, EPA’s decision on the chemical is delayed and companies can lose the money they paid in fees, Leifer said. Those fees can be significant, ranging from a few thousand dollars up to more than $10,000, depending on the category. It is important that EPA and industry are “on the same page and have a good understanding of the inert categories,” he added.

Industry groups claim that the new system is difficult to navigate. They say that companies are confused about the different categories and need better guidance from EPA about the data requirements for new inert ingredients.

Last year’s surge in applications for undisclosed inert ingredients has renewed calls from environmental advocacy groups for disclosure of all chemicals in all pesticide formulations. In 2006, a coalition of advocacy groups and 15 state attorneys general filed petitions asking EPA to require companies to disclose the presence of 371 inert ingredients in pesticides. The groups claim that these 371 substances are potentially hazardous to people and that EPA needs to scrutinize them.

In response to the 2006 petitions, EPA last year proposed to remove 72 chemicals from its list of approved inert ingredients that can be added to pesticide formulations. EPA claims that none of the 72 chemicals is currently used as an inert ingredient in any pesticide product. The list includes common organic solvents such as methyl ethyl ketone and tetrahydrofuran, as well as phthalate derivatives, nonylphenol, and several inorganic compounds.

The proposal angered many environmental groups, including Beyond Pesticides, which is one of the organizations that filed a petition in 2006. The proposal “fails to address the issue of disclosure for the rest of the 300 inert ingredients” that the petitioners want companies to disclose, Beyond Pesticides said in a statement. Instead, EPA’s planned action “targets hazardous chemicals no longer being used as inert ingredients in any pesticide formulation,” it said.

The group is also outraged because the new proposed rule replaces a 2009 proposed rule that would have required companies to disclose inert ingredients in pesticides. EPA pulled the 2009 proposal last year after receiving hundreds of comments both for and against it. Jim Jones, assistant administrator of EPA’s Office of Chemical Safety & Pollution Prevention, explained in a May 2014 letter to those who had filed the petitions why the agency withdrew the proposal. EPA received “few suggestions on how information should be disclosed, how the information would be used, or what the impact of inert disclosure on consumer behavior would be,” Jones wrote. On the other hand, EPA received comments from companies saying that “disclosure of inert ingredients would be extremely harmful to their businesses because it would reveal valuable trade secret information, enabling competitors to copy their products,” the letter said.

Groups representing pesticide manufacturers are also not happy with EPA’s latest proposed rule. They say that EPA does not have the data to demonstrate that the 72 chemicals are no longer used as inert ingredients in any pesticide product on the market. These industry organizations successfully persuaded EPA to extend the comment period on the proposal so companies have more time to determine whether any of the 72 chemicals are used in their formulations.

It remains to be seen whether advocacy groups will petition EPA again this year to get companies to disclose the hundreds of chemicals that are not addressed by EPA’s proposal. EPA is accepting comments on that proposal until Jan. 20 and could finalize it later this year.

Comments
Kathy Gatza (January 15, 2015 10:39 AM)
The chemical 2,4-Dichlorophenoxyacetic acid (2,4-D) which was used in 50% of agent orange and is still used today in pesticides and herbicides should be banned. Until then this chemical should not be allowed to be renamed such as DC 360 and should be highlighted as a chemical that is used in any product, especially medical devices that are used inside the human body.
Reply »

Robert Buntrock (January 21, 2015 3:24 PM)
Actually, Agent Orange was a mixture of 2,4-D and 2,4,5-T. The hazardous agent was the byproduct TCDD (aka dioxin) which was present in significant amounts because DOD skimped on their contract with Dow which led to impure product. TCDD is more likely prepared in 2,4,5-T manufacture unless stringent conditions are maintained. 2,4,5-T has been banned, at least for domestic use. It's use in medical devices would not be indicated (defoliation not needed). Any such use at any time should be documented.
Reply »

Robert Buntrock (January 21, 2015 3:30 PM)
Some indication of inert ingredients in pesticides for non-food use can be deduced from their listed use in pesticides used in the food chain. Solvents usually include xylene and emulsifiers, aerosols, and dyes tend to be common across the board. Fragrances are highly unlikely. All such ingredients are inactive to a large extent for the targeted species.
Reply »