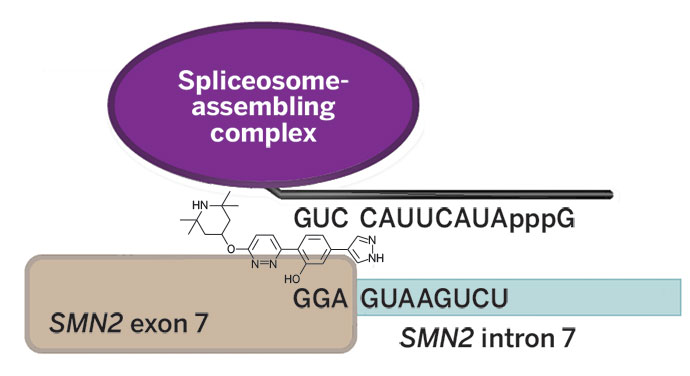 Credit: Adapted from Nat. Chem. Biol.
NVS-SM1 (line structure) most likely works by stabilizing sequence-specific binding of a spliceosome-assembling complex to the interface between SMN2’s exon 7 and intron 7. A, C, G, and U are RNA bases, and p is phosphate.

Discovery of the first molecular mechanism of action for a small molecule that improves RNA splicing in cells could lead to new therapeutics for the genetic disorder spinal muscular atrophy (SMA) and perhaps other conditions involving improper RNA processing.

After cells transcribe genomic DNA into RNA, an RNA-protein complex called the spliceosome removes noncoding sequences, or introns, from RNA transcripts, enabling the coding sequences, or exons, to be translated into functional proteins. Currently, no approved drugs are specifically designed to address errors in RNA splicing.

SMA is the leading genetic cause of infant mortality, with more than half of patients dying before age two. It is caused by the absence of the gene SMN1, which encodes SMN, a protein that protects motor neurons. There is a duplicate gene called SMN2, but it cannot fully make up for the resulting SMN deficiency because its RNA transcript is often spliced incorrectly.

Susanne E. Swalley and Rajeev Sivasankaran of Novartis Institutes for Biomedical Research, in Cambridge, Mass., and coworkers now report that an orally active small molecule called NVS-SM1 doubled cells’ ability to produce fully functional protein from SMN2 and doubled life-span in a majority of treated mice with SMA (Nat. Chem. Biol. 2015, DOI: 10.1038/nchembio.1837). Their mechanistic study shows that the compound likely works by stabilizing sequence-specific binding of a spliceosome-assembling complex to the exon-intron interface at which incorrect splicing occurs.

Novartis is currently recruiting participants for a Phase II trial of NVS-SM1. The agent is competing with two other SMN2 splice-correcting drug candidates—the small molecule RG7800, which Roche, the SMA Foundation, and PTC Therapeutics have in a Phase II trial, and ISIS-SMNRx, an antisense oligonucleotide that Isis Pharmaceuticals and Biogen have in Phase III.

Adrian R. Krainer of Cold Spring Harbor Laboratory, in New York, who collaborated on the discovery of ISIS-SMNRx, comments that the ability to develop small molecules that can correct other RNA-splicing defects “could be facilitated by elucidating the mechanism of action of small molecules, such as the ones reported in the new study.”