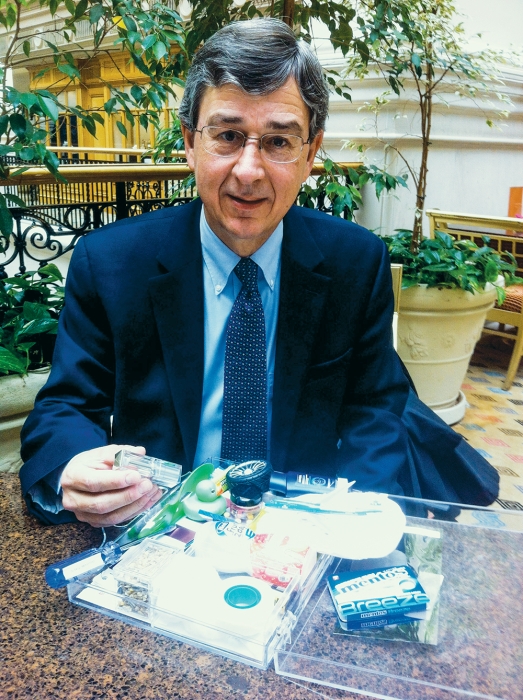 Godefroy Motte is an anomaly. Not because he’s a Frenchman based in London working for a U.S. company—Eastman Chemical—but because he is the rare chemical company executive who is both board member and head of sustainability.

Sustainability is an issue that often receives lip service in the chemical industry. And with Motte’s office located 4,000 miles from Eastman’s Kingsport, Tenn., headquarters, it would be easy to assume his role is a marginal one. But Motte, a straight talker who is also head of the firm’s supply-chain activities, makes it clear he has no problem getting his voice heard—or sustainability strategies delivered—across the Eastman enterprise.

Motte took up his role as head of sustainability in 2011. High on his list of priorities is the acceleration of a program to introduce more sustainable production processes and products. Motte is bringing in his other role—head of Eastman’s supply chain—to work toward a company-wide low-environmental-impact, high-efficiency chemical supply chain.

Motte is a detail man. Meeting for a coffee in London, he slides over a small case containing about 20 products that use Eastman materials, including tape, Mentos, a toothbrush, and Wrigley’s gum. “This is what we do,” he says, holding up a rubber duck made with Eastman’s phthalate-free plasticizers.

Products Eastman makes that can be classified as sustainable can give the firm’s customers a potential market advantage, cut resource use within Eastman, and reduce the burden on the environment, he says.

“At Eastman, we say that sustainability is the ability to ‘show your heart and use your head,’ ” he says. “ ‘Show your heart’ is what we have been doing for many years to protect our employees and the environment in communities where we operate, to reduce our energy and our waste. It has a tangible impact on our bottom line. ‘Using your head’ is when you move into the innovation stage, taking a proactive and transformational approach to sustainability by engaging with your customers,” he adds.

“One of our corporate sustainability goals is to ensure that two-thirds of our revenues from new product launches are ‘sustainably advantaged’ by the end of this year. We are well on track to achieve that goal,” he says. An example is Eastman’s Omnia solvent, introduced in 2014, which has an “excellent” toxicology profile and is biodegradable but provides enhanced solvent performance, Motte says.

Motte gets a little frustrated that companies are choosing not to implement more sustainable, novel formulations because they are more expensive to purchase or require investment in technology or capital projects. “This may be because, ultimately, most consumers won’t pay more for sustainable products, unless they see the link with health, safety, and wellness,” Motte says. “The problem is that innovation does add cost.”

But Motte is an optimist and says he relishes solving such mountainous problems. The solution lies in collaboration and engagement with the entire value chain. It can only be done “if all partners are taking courageous leadership,” he says.

Now in his late fifties, Motte used to climb actual mountains. In the past, he summited major European peaks including the 16,000-foot Mont Blanc, the highest mountain in the Alps. Today, he has “adjusted to easier sports” such as the 10K run he aims to do weekly in London.

Looking ahead, one area where Motte sees extraordinary opportunity for Eastman is in adopting a “circular economy” approach to chemical manufacturing. In the circular economy, products are designed at the earliest stage to be recyclable and nontoxic so as to avoid resource scarcity and minimize environmental impact. “This is the future, and not only for Eastman,” he says.

Motte rejects the notion that Eastman’s coal-to-chemicals activities in Kingsport compromise the firm’s ability to be truly environmentally sustainable. Using energy from the coal to make steam for chemical production makes Eastman one of the most energy efficient firms in the chemical industry, Motte says.

As to why a Frenchman would choose to live in London: Motte left France in 1992 for a two-year assignment in the U.S. and never returned. He has moved 17 times with Eastman. He and his wife, Veronique, moved to London simply to follow their three children, who were all educated in England and now work there.

A chemical engineer by training, Motte has continued to study since joining Eastman in Paris in 1985. Completing the Advanced Management Program at Harvard Business School in 2008 was “truly a turning point in my career,” he says. “I certainly expanded my knowledge and became comfortable with my leadership style.”

It made him determined that he should head up sustainability at Eastman. But he didn’t walk into the job. “I had to ask for the job several times,” he says.