Finance: Makers of drugs and chemicals are caught in a selling frenzy

CONTRACTION
[+]Enlarge
The Shanghai stock market has plummeted since peaking in early June. 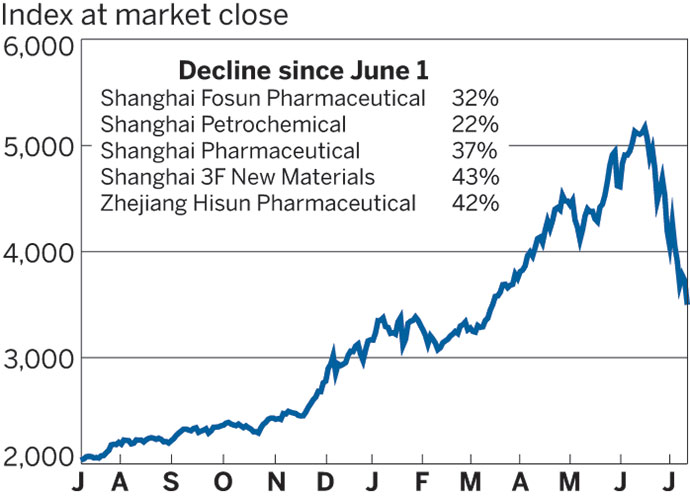 The Shanghai stock market has plummeted since peaking in early June.

In the span of a few weeks, the stock price of the fluoropolymer producer Shanghai 3F New Materials dropped by nearly half. And the Chinese firm is not alone. Stocks in China are going through a major correction that could end up impacting the Chinese economy as a whole.

Until recently, the performance of stocks on the Shanghai Stock Exchange had been a bright spot in an otherwise weak economy. For nearly a year, strong buying by small investors more than doubled stock prices to levels that would be excessive by the standards of other stock exchanges.

“The huge growth in stock prices in the first half of this year made no sense,” says David S. Jiang, president of Sinodata Consulting, a Beijing-based market research firm focused on the chemical industry. Business conditions, Jiang notes, did not support the general bullishness. The government boosted prices by ordering the state media to publish articles encouraging stock investment, he says.

Authorities expected rising stock prices to bolster economic growth, says Travis Gan, an executive vice president at Jingzhou Jianghan Fine Chemical, a privately owned producer of silane-based chemicals in the central province of Hubei. “When public companies are worth more, they can borrow more, and then they can invest more,” he says.

Yet, as far as chemical makers are concerned, it is pointless to invest more in China, according to Jiang. “We already have high capacity in the chemical industry.” Instead of artificially boosting stocks, he says, the government should focus on measures to reduce the role that state corporations play in the economy. Now, the stock price decline will delay the government’s effort to sell shares in state-owned companies to the public.

In an attempt to keep stocks from falling further, the government has imposed restrictions on short-selling, lent money to stockbrokers, blocked major shareholders from selling shares for six months, and banned new initial public offerings. Hundreds of companies applied for, and were granted, stock trading suspensions. On July 9, after weeks of decline, the Shanghai Composite Index rose by nearly 6%. The price of 3F New Materials’ stock shot up by 10%.

The stock decline is not expected to have much impact on the business of chemical and drug firms, at least in the short term. Business will go on normally at Jianghan, Gan expects, unless it brings about a general recession. Even then, Jianghan can still export to unaffected parts of the world, he says.

And Chinese companies that seek to buy assets overseas will continue to do so, Sinodata’s Jiang adds. In recent months, numerous Chinese firms have acquired foreign companies, particularly in the life sciences sector. “In niche markets, there is money in China,” he says.