PRECISION
[+]Enlarge
Credit: Imec
To manufacture silicon wafers, semiconductor makers still use some compounds that could be soon banned. 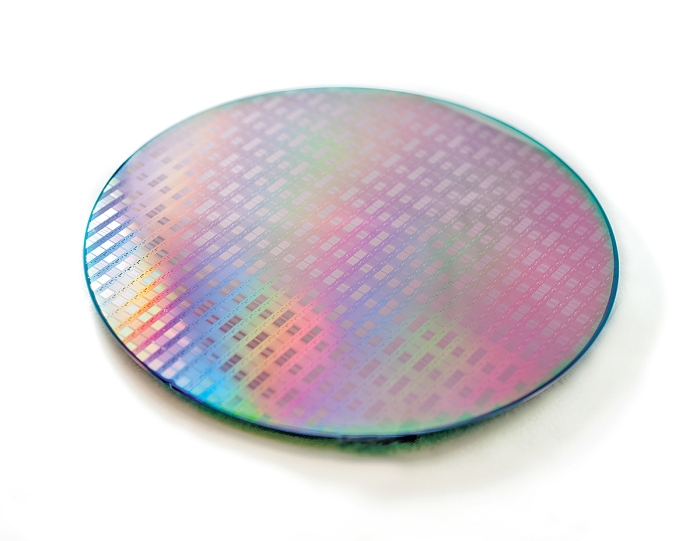 Credit: Imec
To manufacture silicon wafers, semiconductor makers still use some compounds that could be soon banned.

Electronic materials suppliers already face a tough task in helping their customers to constantly shrink circuitry on semiconductor devices. Their job will be made harder if they can no longer use perfluorooctanoic acid (PFOA) or long-chain perfluoroalkyl carboxylates (LCPFACs) in the formulation of new generations of photolithographic materials, as proposed U.S. and European Union regulations envisage.

Chip industry giants are currently researching how to produce chips with features measuring 10 nm or even less (C&EN, July 6, page 31). The photolithographic processes for drawing such tiny circuit lines on the surface of a silicon wafer will require high-performance photoresists and antireflective coatings, both of which traditionally are made using PFOA and other long-chain compounds.

Excimer photoresists, currently the most common type of photoresist, often rely on such compounds, says Mark Thirsk, managing partner at Linx Consulting, a firm focused on the electronic materials industry. Such photoresists use ultraviolet light from an excimer laser to create patterns on the wafer surface. “A new photoresist has a list of possible ingredients [that can be chosen for formulation], and by taking off compounds, it makes it harder.”

Major electronic materials suppliers claim that they can live with the proposed regulations. Merck KGaA, which last year bought materials maker AZ Electronic Materials, says it recently launched a line of antireflective coatings that are not produced using PFOA or perfluorooctanesulfonic acid.

And Japanese electronic materials supplier JSR tells C&EN that its materials do not contain LCPFACs. One of JSR’s products makes use of PFOA, but because the proposed U.S. regulations state that manufacturers can register their existing products and continue to sell them if they pass scrutiny, the company says its current product lineup should be unaffected.

SEMI, a business association focusing on the electronic industry supply chain, has however expressed great concern over the proposed U.S. and EU regulations. Semiconductor manufacturers, some suppliers of electronic materials, and equipment makers could face a hard time in complying or could even be unaware of the new rules.

“PFOA and the LCPFACs that would be restricted are used in semiconductors found in the U.S. and Europe,” said Sanjay Baliga, SEMI’s director of environment, health, and safety, at a briefing this spring. In particular, the European proposal to prohibit products and materials containing more than 2 ppb of PFOA and related substances is not practical because the compounds could be detected in products and materials that accidentally came in contact with the chemicals, he said.

“Two ppb is so low that it would effectively ban many alternatives to PFOA and other long-chain fluorocarbons that firms have been devising as replacements,” says Thomas H. Samples, director of risk management at Chemours, DuPont’s recently spun-off performance chemicals business. DuPont has for nearly a decade participated in a voluntary Environmental Protection Agency stewardship program to phase out PFOA and LCPFACs. DuPont stopped producing and using PFOA in 2013.

But the electronic materials makers should not be surprised that the U.S. and EU are trying to further restrict the use of PFOA and LCPFACs, Samples notes.

Earlier this year, EPA announced that it planned to force remaining manufacturers to stop production and use through regulation, Samples points out.

The use of PFOA and LCPFACs by the electronics industry poses a minimal threat to the environment, Linx’s Thirsk contends. Although PFOA residues from photoresist developers used to be routinely released into the environment through the semiconductor plant’s liquid waste streams, these types of developers are falling out of favor with manufacturers.

As for photoresists and antireflective coatings, they are thoroughly stripped off from the semiconductor device before shipment, Thirsk says. Those stripped materials end up in the plant’s waste gas or waste solvent streams, where they end up eliminated by incineration. “It’s all removed,” he says.

Persistent Pollutants
EU agency to propose restrictions on PFAS in firefighting foams
Persistent Pollutants
US military spending bill would phase out some PFAS procurement
Chemical Regulation
US EPA restricts certain PFAS imports
Share X
To send an e-mail to multiple recipients, separate e-mail addresses with a comma, semicolon, or both.
Title: Electronics: Loss of fluorinated compounds narrows options for chipmakers
Author: Jean-François Tremblay
Chemical & Engineering News will not share your email address with any other person or company.