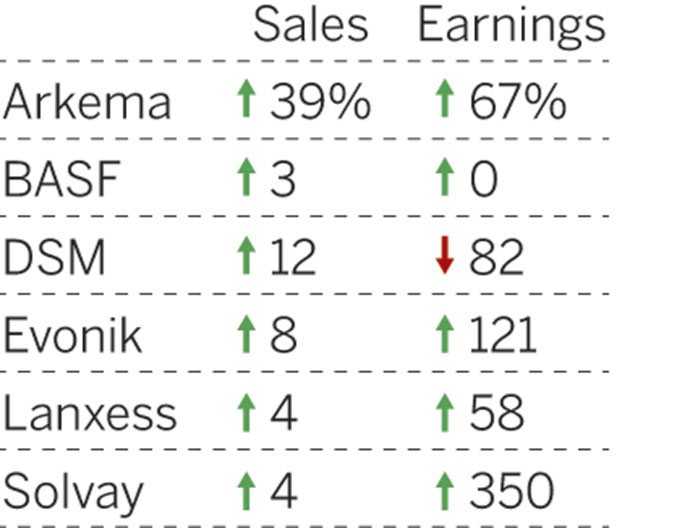 Leading European chemical firms are reporting an uptick in sales and profits for the second quarter of 2015 compared with the same period a year ago. Although sales are accelerating, companies say some markets are spotty, and they remain cautious about prospects for sustained growth in 2015. Most firms cite recent restructuring measures or growth in markets outside Europe as key reasons for improvements.

And yet the uptick in European company sales compares favorably with the second-quarter performance of some leading U.S. chemical makers, including Dow Chemical and DuPont, which recorded sales declines, due in part to the effect of shifting exchange rates.

Additionally, confidence among Europe’s chemical company executives has improved in recent months, according to a CEFIC survey. British chemical execs also appear to be gaining confidence, according to the Chemical Industries Association, a U.K. trade group. A survey found that nearly 60% of U.K. chemical firms expect sales to rise during the next 12 months.

Lanxess reported a surge in second-quarter earnings driven by higher sales volumes and positive currency effects. The German firm, which until recently was struggling, has upped its full-year profit forecast as a result. “Lanxess is returning more and more to the right course,” Chairman Matthias Zachert says.

French chemical maker Arkema experienced a significant financial improvement in the second quarter. Like-for-like sales increased 12%, rising to 39% when Bostik, its recently acquired adhesives business, is included. Sales in thiochemicals, nylon, and fluorochemicals improved nicely, the firm says. “Arkema enters the second half of the year with confidence, while remaining cautious on the future development of the global economic environment,” CEO Thierry Le Hénaff says.

Economy
No German chemical industry recovery expected until 2022
Economy
European firms tough it out in the third quarter
Business
Europe’s output recovers
Share X
To send an e-mail to multiple recipients, separate e-mail addresses with a comma, semicolon, or both.
Title: European Chemical Sales Rise In Second Quarter
Author: Alex Scott
Chemical & Engineering News will not share your email address with any other person or company.