[+]Enlarge
Credit: Megabots/Suidobashi/Shutterstock
Clash of titans: Japan and the U.S. prepare to throw down. 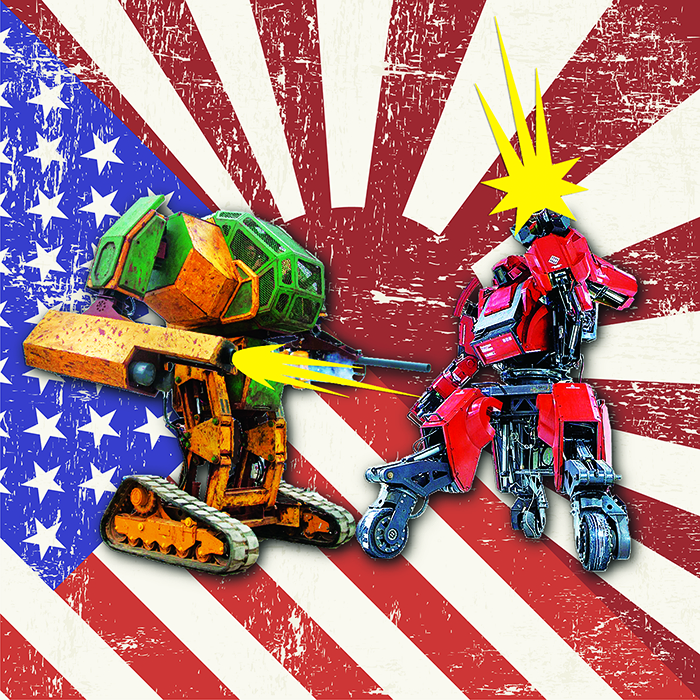 Credit: Megabots/Suidobashi/Shutterstock
Clash of titans: Japan and the U.S. prepare to throw down.

The gauntlet—or whatever it is that robots wear on their hands—has been thrown. In June, MegaBots, a company that has built the first American piloted fighting robot, challenged Japan-based Suidobashi Heavy Industry to a duel that’s the first of its kind: an international robo-rumble to take place next year.

MegaBots founder Matt Oehrlein put out the challenge in June: “We have a giant robot; you have a giant robot. You know what needs to happen.” Suidobashi founder Kogoro Kurata accepted soon afterward. MegaBots hopes the fight eventually inspires a new sports league that pits piloted machines against each other.

Suidobashi unveiled its robot in 2012—which you can buy on Amazon for a cool $980,000—but it was built for users to enjoy themselves, not to fight other robots, let alone robots piloted by other humans. That said, their 13-foot-tall robot is far from harmless with its twin Gatling gun that shoots 6,000 ball bearings per minute and can be triggered using facial expressions. An instructional video gives the saccharine yet terrifying warning, “Be careful to not cause a shooting spree by smiling too much!” On the other front, MegaBots’ robot can fire 3-lb paintballs at 120 mph.

Kurata accepted MegaBots’ challenge on the condition that only melee combat is allowed. “Just building some huge thing and sticking guns on it, it’s super American,” he said.

To prepare, MegaBots is trying to assemble a so-called Team USA made up of U.S. firms, such as IHMC Robotics and Howe & Howe Technologies, and (if the firm meets its $1.25 million Kickstarter stretch goal) NASA to perfect the robot’s motion, weaponry, and safety.

The patriotism of the affair is not lost on Kurata. “We can’t let another country win this. Giant robots are Japanese culture.”

Robots could one day fight to solve various disputes, but Daniele (Danny) Benedettelli prefers to see robots put to other uses. After quitting his job as an R&D engineer, Benedettelli took up a serious hobby in Lego Mindstorms, a product that allows builders to motorize their Lego creations and make them follow user-written code. “Since everybody was mocking me because I was playing with Lego, I said, ‘Okay, it’s time to see if it can really work as a job or not,’ ” he recalls, sitting in his Lego-laden workshop.

His latest contraption might catch the eye of giant robot makers Suidobashi and MegaBots: a telemetry suit for controlling a 1-foot-tall robot. In other words, when Benedettelli puts on the Lego suit, his arm joints’ movements are measured and wirelessly replicated by a mechanized mini-me, which he also built out of Lego pieces.

Dating back to Hollywood puppeteers in the 1980s, telemetry suits were used to control dinosaurs in “Jurassic Park,” for example. But Benedettelli says his suit is the first one built largely from toy pieces. Plus, the custom electronics system he devised makes his telemetry suit the fastest and most responsive he’s seen for under $70. Under the hood, the suit consists of potentiometers that measure his arms’ and torso’s positions and communicate via Bluetooth to his robot.

Benedettelli currently has no pressing application in mind for the telemetry suit. He says the system’s obvious use would be for remote controlling small machinery or participating in distant events. Not so much for giant robot duels, though.

[+]Enlarge
Credit: Francesco Rossi
Playtime is over: Benedettelli wears his Lego on his sleeve. 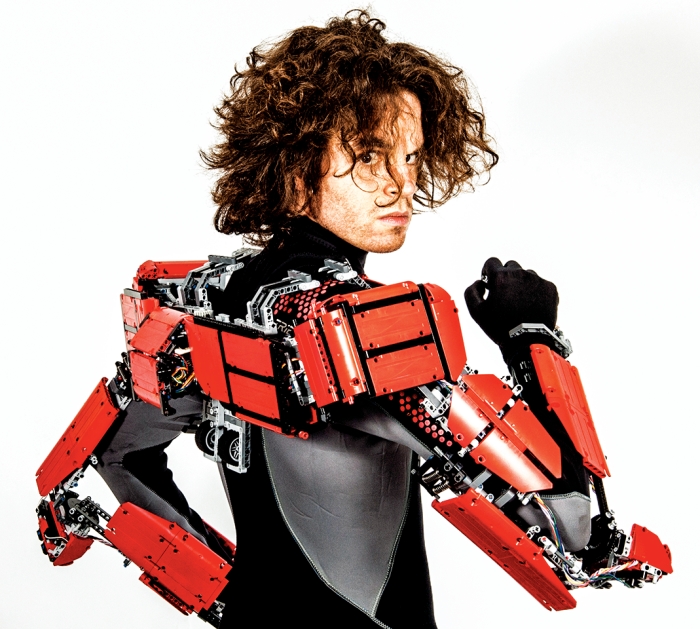 Credit: Francesco Rossi
Playtime is over: Benedettelli wears his Lego on his sleeve.