SINGLE SITE
[+]Enlarge
Credit: Novartis
This model of a glycoconjugate shows a linker connecting a glycan antigen (purple and orange) to cysteines from a disulfide bond (yellow) on the carrier protein CRM197 (gray). The synthetic method is specific, attaching the sugar at one of the protein’s disulfides but not the other (lower left). 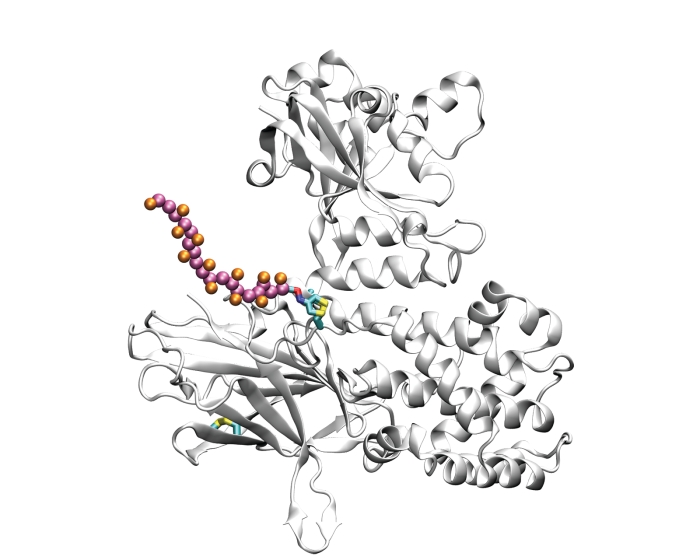 Credit: Novartis
This model of a glycoconjugate shows a linker connecting a glycan antigen (purple and orange) to cysteines from a disulfide bond (yellow) on the carrier protein CRM197 (gray). The synthetic method is specific, attaching the sugar at one of the protein’s disulfides but not the other (lower left).

Glycoconjugate vaccines can spur the body’s immune system to seek out and attack pathogens or cancer cells on the basis of which specific sugar chains decorate those targets. Approved vaccines for conditions such as meningitis and pneumonia work through such sugar-based antigens.

Now, researchers have used several reactions to link sugars to specific amino acids in a carrier protein and have found that where they attached the carbohydrates affected the level of responses to the vaccine (Angew. Chem. Int. Ed. 2015, DOI: 10.1002/anie.201506112).

The work shows that better control over attachment points used in the conjugation process could aid the development of better characterized vaccines with improved efficacy and more consistent molecular properties.

The investigators—Qi-Ying Hu of Novartis Institutes for BioMedical Research, in Cambridge, Mass.; Francesca Micoli of Sclavo Behring Vaccines Institute for Global Health, in Siena, Italy; and coworkers—note that this is the first comparative study of the immune effects of different sugar conjugation sites.

The sugar, or glycan, in the study is a lipopolysaccharide antigen from Salmonella enterica serovar ­Typhimurium, which causes a form of food poisoning that can be fatal, especially in immunocompromised patients. There are no current vaccines for this pathogen.

The research team used several site-selective conjugation methods, including two they developed, to attach the antigen via a linker to specific cysteines, lysines, tyrosines, glutamates, and aspartates in a carrier protein called CRM197. When they injected the vaccines into mice, the amount of antibacterial antibodies generated varied significantly depending on the conjugation site—as much as an order of magnitude.

Gonçalo Bernardes, an expert on site-selective protein modification at the University of Cambridge and the University of Lisbon, comments that this is the first structure-activity relationship study that clearly shows that attachment site can play a key role in immune responses to glycoconjugates. Conjugation site should be taken into consideration in the design of future carbohydrate-based vaccines, he says. However, Bernardes notes that scientists will also need to assess the effects on vaccine efficacy of the lengths of chemical linkers used to attach carbohydrate antigens to amino acids.