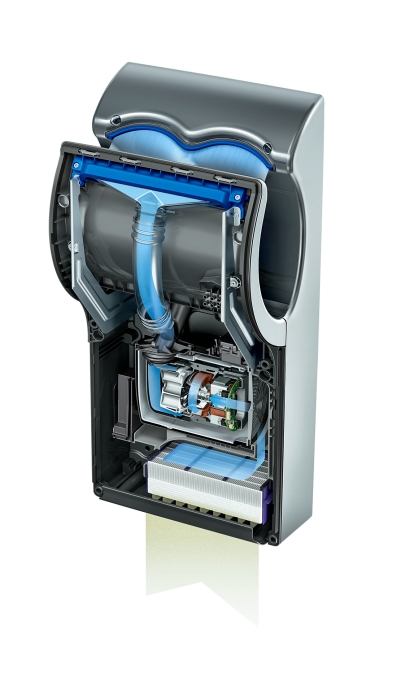 A member of the Newscripts gang was recently in a Chicago restaurant restroom chatting with a friend about research that had shown jet air driers, such as Dyson’s Airblade, can redistribute microbes throughout the bathroom’s air. That’s when a third person on the other side of the restroom interjected, “That is incorrect.”

The restroom interlocutor just so happened to be Vinod Jotwani, head of marketing for Dyson in the U.S. There then followed an in situ discussion—next to an Airblade, naturally—about the hygiene performance of paper towels versus the Airblade.

Jotwani and his Dyson colleagues say paper towel giant Kimberly-Clark and industry association European Tissue Symposium have been making false claims that paper towels are more hygienic than the Airblade. Dyson says Kimberly-Clark “propounds falsehoods” made in non-peer-reviewed studies undertaken by Keith Redway, a microbiologist from London’s University of Westminster, which are “biased and misleading.”

According to Dyson, the Airblade uses a filter that removes 99.9% of bacteria and dries hands hygienically in 10 seconds.

And yet a peer-reviewed study in The Journal of Hospital Infection (2015, DOI: 10.1016/j.jhin.2014.11.007) by Redway and Emma L. Best, a microbiologist from England’s Leeds General Infirmary, found that single-use paper towels are the most hygienic hand-drying method. The study compared the extent to which various drying methods—paper towels, a roller towel, a warm air drier, and the Airblade—spread microbes.

The Airblade was found to disperse liquid, which may still contain microbes, from the users’ hands to up to nearly 5 feet away, compared with 2.5 feet for the other drying technologies. The study identified that the greatest number of microbes was transmitted during the use of a jet air drier and at a height of 2 to 4 feet. “This suggests that parents should take care to keep children away from the direct air stream of jet air driers in washrooms,” according to a University of Westminster press release.

There is no assertion in the study that jet air driers “increase bacteria on people’s hands,” Redway tells Newscripts. And the scientists openly state in the paper that the study was commissioned and partly funded by the European Tissue Symposium.

But Dyson hasn’t washed its hands of the matter quite yet. The British firm says an independent report on hygiene and hand drying from Bradford University, which will investigate the basis for the Dyson Airblade hand drier’s hygiene claims, will shortly be submitted for peer review and publication.

Public health workers in San Francisco appear to be just as keen as Dyson and Kimberly-Clark to maintain hygiene standards. The city has begun testing a superhydrophobic coating sprayed onto walls to prevent people from urinating on them. 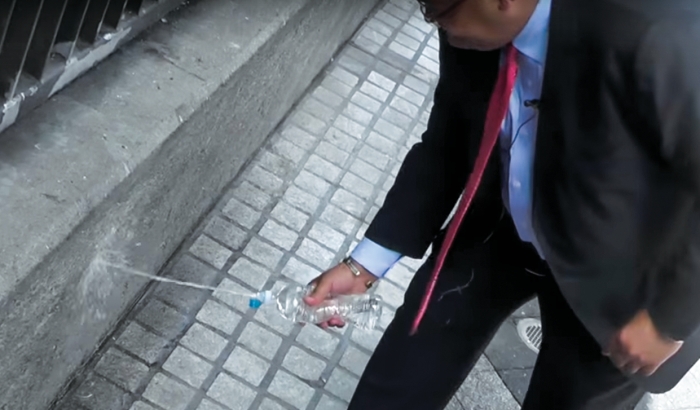 The coating is so water repellent that it causes any urine that hits it to bounce right back onto the shoes or even the pants of the person peeing, says Mohammed Nuru, San Francisco’s director of public works. It amounts to “pee-back” for bad behavior, some might say.

Made by Jacksonville, Florida-based UltraTech International, and named Ultra-Ever Dry, the coating is sprayed onto a surface in two coats. The base coat contains xylene and tert-butyl acetate, while the primary substance in the top coat is acetone. It creates a nanoscale surface texture with geometric shapes that have peaks that repel water-based liquids.

“I must say that we are surprised with the way people have been taken with this application,” says Michael Hudgins, who works for Maxx Sales, a supplier of the product in the U.S. If the chemistry works as intended, those peeing in public should also get a surprise of their own—a repellent one, of course.

Inorganic Chemicals
Ikea to introduce pollution-fighting curtains
Environment
Zapping static charges
Materials
For younger-looking skin, try a pinch of platinum
Share X
To send an e-mail to multiple recipients, separate e-mail addresses with a comma, semicolon, or both.
Title: Hot Air In The Restroom, Pee-Back Time
Author: Alex Scott
Chemical & Engineering News will not share your email address with any other person or company.