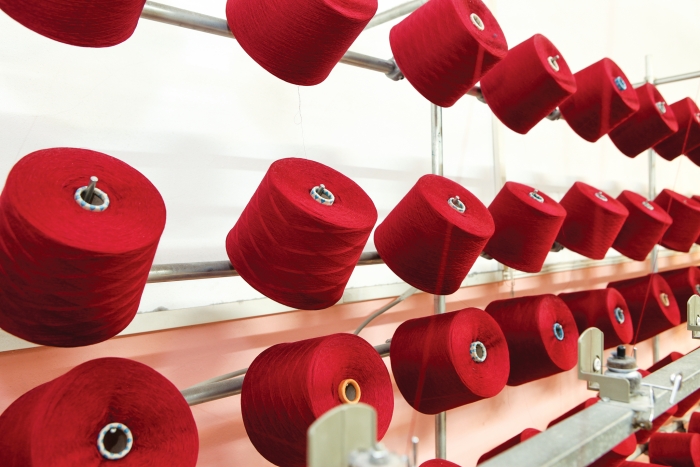 Credit: Shutterstock
Textile chemicals with low environmental impacts are emerging, but they could cost more.

In 2012, more than half of India’s $1.25 billion worth of textile exports to the U.S. came from the southern city of Tiruppur. While the business has brought economic benefits, its environmental and social costs are many. Downstream of Tiruppur and its more than 300 textile factories, the Noyyal River has become foamy and discolored. Pollution from this industry is blamed for causing illness among local people and sapping the productivity of nearby farms.

Tiruppur is not an isolated case. According to the World Bank, 20% of water pollution globally is caused by textile processing. Nongovernmental organizations (NGOs) such as environmental groups say parts of India and China are among the most polluted.

Major chemical companies as well as start-ups are responding by developing less harmful textile-processing chemicals. But such substances are often more expensive than ones in use. Lower-cost reagents and better enforcement by regulators are required, textile chemical executives say, along with a shift in consumer behavior away from opting for the cheapest products.

The textile industry uses more than 8,000 chemicals to make the 400 billion m2 of fabric sold annually around the world. Many are toxic and persist in the environment. They include heavy-metal-rich dyes and fixing agents, bleaches, solvents, and detergents.

Making textiles is also a water-intensive business. Producing a pair of jeans requires about 1,800 gal of water; a T-shirt takes 700 gal. Treating such large volumes of waste water is costly—if it is treated at all.

Pollution also can occur after clothing leaves the factory. Outdoor gear is often stain- and waterproofed with perfluorinated compounds (PFCs), but these additives can detach during use. The PFCs or their breakdown products end up in the environment where they can be persistent, bioaccumulative, and carcinogenic hazards.

Clothing makers were stung into action in July 2011 by “Dirty Laundry,” a report by the environmental group Greenpeace that claimed they source their textiles from low-cost producers in developing countries while turning a blind eye to the pollution this generates. By November 2011, several major apparel producers and retail organizations had come together to form Zero Discharge of Hazardous Chemicals.

ZDHC’s members, which now number 25, have committed to eliminating release of toxic substances into waterways by 2020. Members include Adidas, Gap, H&M, Nike, Puma, and the Taiwanese dyestuffs maker Everlight Chemical.

Textile chemical giant Archroma, which has annual sales of about $2 billion, is involved in several working groups within ZDHC. “We believe ZDHC will really promote the use of safer alternative chemicals,” says Carole Mislin, head of product stewardship for Archroma.

Archroma says it sells a series of textile processing chemicals that have a lower environmental impact. The firm is also working to train textile producers in techniques that minimize wastewater generation and energy consumption.

For Greenpeace, though, change is not happening fast enough. In August, the NGO published another report with a video showing how well-known outdoor clothing firms are still using PFCs and that these compounds are now found in locations far from human populations.

“The earlier Greenpeace report and latest report have caused interest from apparel and clothing producers to really take off,” says Mårten Hellberg, chief executive officer of OrganoClick, a seven-year-old Swedish start-up that has developed an alternative to PFCs.

OrganoClick describes its PFC replacement, named OrganoTex, as a long-chain alkane-based coating. The firm says it’s made from biomaterials using a catalyst derived from small organic molecules found in fruit. If the alkane breaks away from the textile, it exposes chemical bonds that are open to degradation by bacteria, Hellberg says.

OrganoTex matches PFCs on cost, according to OrganoClick. “People are really keen to come to us and start doing tests,” Hellberg says. The firm is due to increase its capacity for the material 10-fold in the next few weeks when it opens a 20,000-metric ton-per-year plant in Täby, Sweden.

Archroma and other big textile chemical producers such as DyStar, Huntsman Corp., and Protex are also developing PFC-free waterproofing agents. Archroma’s technology is based on a wax of undisclosed origin. Protex uses acrylics.

Additionally, Swiss firm Beyond Surface Technologies (BST) is “months away” from completing a project to develop a PFC substitute, CEO Matthias Foessel tells C&EN. Earlier this year Patagonia, a major outdoor clothing company, invested about $1 million in BST to enable the firm to accelerate R&D on a range of environmentally benign textile chemicals.

BST has been adapting chemicals that are already in use in the fields of cosmetics, personal care, food, and food hygiene. “These sectors are all ahead of the textiles sector in using renewable, safer chemicals,” Foessel says. 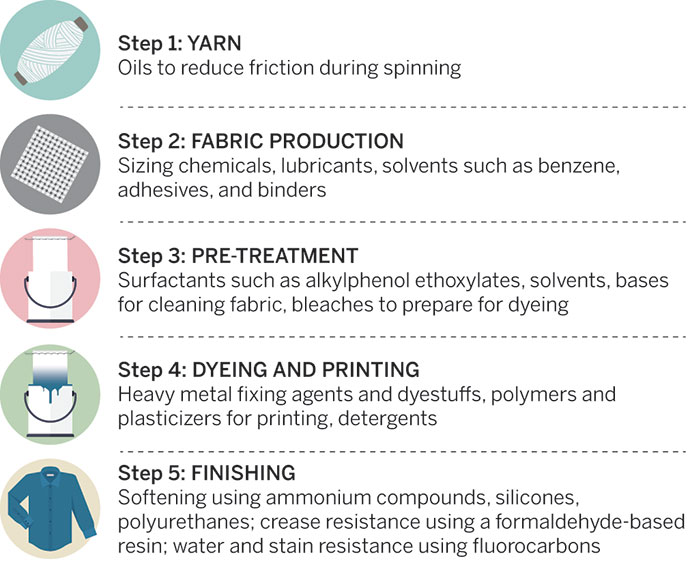 Textile production involves intensive use of potentially hazardous substances at each key step.

BST’s finish for promoting wicking in textiles is based on a seed oil that was originally used in hard surface coatings, he says. Among its other commercial products, BST has developed renewable cross-linking agents that can be used in place of formaldehyde-containing compounds in the production of denim.

Archroma also is seeking to use renewable raw materials for its textile chemicals. The firm’s EarthColors range of dyes is derived from waste nutshells and rosemary leaves. Product cost has not been an obstacle, according to Archroma. “The EarthColors have been very well received by the textiles industry,” Mislin says.

DyStar has introduced Realan Black, a black dye for wool that is free of halogens and heavy metals, according to Fanny Vermandel, DyStar’s global director of marketing for coloration. Realan Black replaces mordant black dyes, which require an agent—often hazardous hexavalent chromium—to fix them onto the fiber.

To help accelerate the adoption of low-environmental-impact textile chemicals, the International Chemical Secretariat (ChemSec), a Swedish NGO, in August introduced an online guide for textile manufacturers and branded clothing firms. It features a free-to-use database of more than 6,500 textile chemicals. Hazardous chemicals and available substitutes are identified. More than 2,500 unique visitors have used the guide since it was launched in August.

“One simple search of a chemical of interest will tell you if it is of concern,” says Jerker Ligthart, a chemical engineer who is senior chemicals adviser for ChemSec. The organization is hoping that branded clothing companies and smaller companies will be the most frequent users of the guide. “Together, they cover the whole supply chain and are in a position to achieve a change,” Ligthart says.

Although more benign substitutes are becoming available, they are almost always more expensive. “The low-cost market and even illegally operating textile producers will not take up more expensive sustainability solutions,” DyStar’s Vermandel cautions. “Many suppliers of chemicals to the textile industry don’t follow the necessary requirements in respect of product stewardship, which make them cheaper but not reliable.”

Archroma has decided to take a transparent approach by providing customers with information about the financial and environmental costs of using its products. “In this way dye houses can make informed choices for a more innovative technology compared with traditional chemistry,” Mislin says.

If hazardous textile chemicals are to be eliminated, better enforcement of water pollution regulations in developing countries is required. This could already be happening. In the past two years almost 400 dye houses in Tiruppur have been closed down for illegally discharging untreated wastewater, Mislin says. In China, authorities also are closing illicit dye houses, she says.

Better product stewardship will also be needed to reduce pollution, according to DyStar. “Purchasing controls and auditing of the complete supply chain by brands and retailers is necessary,” Vermandel says. “External pressure from NGOs is also helpful to raise public awareness and to push through more expensive sustainable solutions.” The firm predicts a significant improvement by 2020, when ZDHC’s members should have stopped discharging hazardous substances.

One member, Nike, is collaborating with Massachusetts Institute of Technology to determine how to reduce the environmental impact of processing cotton, polyester, leather, and rubber during shoe production.

Nike already has shown glimpses of the kind of technology it wants to adopt. In the past couple of years, the company has switched its polyester dyeing in Taiwan to a water-free, supercritical carbon dioxide process developed by Amsterdam-based DyeCoo Textile Systems. With the supercritical technology, drying isn’t required, dyeing time is cut by 40%, and energy use is cut by 60%, the Dutch firm says.

In recent weeks Nike and MIT published a joint report flagging the need to reduce textile production’s role in climate change. Producing one T-shirt generates the same amount of greenhouse gas as driving a car 10 miles, the report states.

To seek out sustainable technologies, MIT’s CoLab crowdsourcing platform in September began inviting proposals for “revolutionary new ideas for how to engage industries, designers, and consumers in valuing, demanding, and adopting low-impact fabrics and textiles.”

But technology development alone won’t be enough to end pollution from textile production, BST’s Foessel cautions. “It starts with each one of us,” he says. “As long as we like to buy garments at the lowest possible price, as long as we like to change our look every season and throw away what we bought last season, we are driving and influencing the textile value chain accordingly.”

alex scott (April 20, 2016 12:25 PM)
Dear Cristian, Many thanks for your comment. The article is put together from a series of phone and face to face interviews, so references are not possible for much of the content of the article. We will though do our best to increase the number of online links to reports or studies.
best
Alex Scott
Reply »

Mark David (August 27, 2016 6:33 AM)
There are two point, if we think for positive way, then this chemical are useful for textile industries. But from another point of view it is also harmlful
Reply »