Discovery of phytochrome uncovered how plants flower in predictable ways 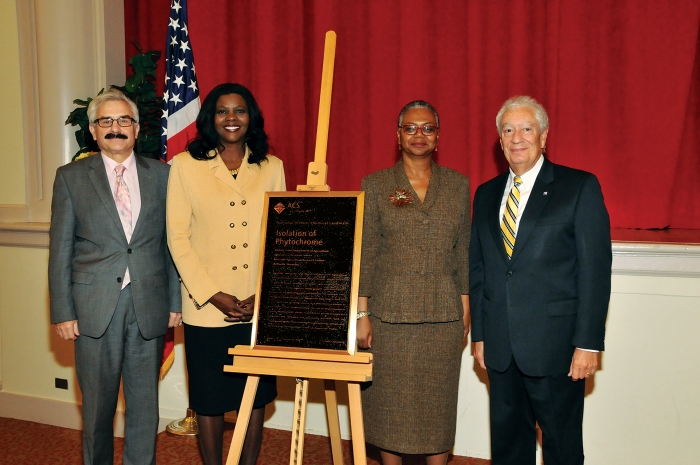 How do certain plants, like the black-eyed Susan, know to flower during the summer while others, like the chrysanthemum, wait until the fall to bloom? The answer lies in a light-sensitive pigment called phytochrome that helps regulate plant growth and development by detecting light and darkness. The pigment was isolated in 1959 by scientists at the U.S. Department of Agriculture’s Agricultural Research Service (ARS), opening up new plant breeding possibilities for crop growers.

This seminal achievement has been designated a National Historic Chemical Landmark by the American Chemical Society. A ceremony took place on Oct. 21 at the Beltsville Agricultural Research Center in Beltsville, Md., where ACS presented USDA representatives with a plaque that read, in part:

“Understanding the role of phytochrome in plant development allows scientists to produce crops for seasons and latitudes not previously possible, both by manipulating the environment through lighting controls and by breeding plants with desirable photoperiodic traits.”

The hunt for phytochrome began in 1918, when USDA scientists were puzzled by two questions facing crop growers: Why doesn’t the Maryland mammoth variety of tobacco plants, which is commercially desirable, flower at the end of summer like other tobacco plants? And why do soybean plants mature at the same time even if farmers stagger their planting to prolong their harvest? 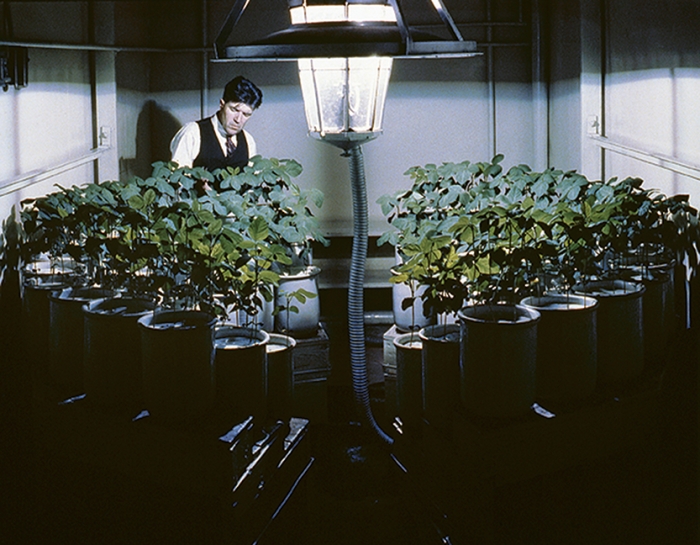 Suspecting that light affects plant development, USDA scientists tested the impact of day length on tobacco and soybeans. A control group of tobacco plants was placed outdoors and received about 14 hours of natural light, while a test group was placed outdoors for seven hours and kept in darkness for the remainder of the day. They found that the tobacco grown under test conditions matured sooner, flowering and developing seeds, while the control plants continued to make only leaves. Similarly, the soybean plants in the test group developed seedpods quicker than the control group.

They named this phenomenon the photoperiodic response in reference to behavior that is affected by the relative length of day and night.

In other experiments, USDA scientists gauged plants’ reactions to different wavelengths of light. Using a prism to cast different colors of an array of plants, they found that red light was a strong inhibitor to flowering. In seed germination, red light of a specific wavelength, 670 nm, produced optimal germination. Light in the far-red region, at the edge of the visible spectrum near 700 nm, was the strongest inhibitor of germination. Interestingly, red and far-red light could be flashed alternately 100 times or more, but only the final flash determined the plant’s response.

Scientists eagerly sought to identify the chemical that produced such a response within plants. Chemist Sterling Hendricks proposed that a single pigment was responsible and that it was photoreversible, meaning that it could change between one form responding to red light and another responding to far-red.

In 1959, USDA scientists led by botanist Harry A. Borthwick isolated the pigment, which confirmed Hendricks’s predictions. “The existence of this pigment was so unexpected that it was dubbed by a critic as a ‘pigment of the imagination.’ However, since [the pigment’s] detection, many have called it one of the most important discoveries in plant science in the 20th century,” said Pat Confalone, ACS Board chair, during the dedication ceremony.

For example, crop growers can produce tomatoes that grow fruit for an extended period of time or soybeans that can be grown in higher or lower latitudes.

“In a world with an ever-growing population, the prospect of more productive plants becomes a desirable way to ensure adequate food resources well into the future,” Confalone said.

Across the U.S., the National Historic Chemical Landmarks program has awarded landmark status to more than 75 places, discoveries, and achievements in the history of chemical science and technology.

ACS launched the chemical landmarks program to enhance public appreciation for the contributions of the chemical sciences to modern life in the U.S. and to encourage a sense of pride in the practitioners of those sciences. Prospective landmarks can be nominated by ACS local sections, divisions, or committees.