SPEAK OUT
[+]Enlarge
Credit: Paul McKinnon/Shutterstock.com
Scientists and activists hit Canadian streets beginning in 2012 to rally against what they claimed was a government attack on science. 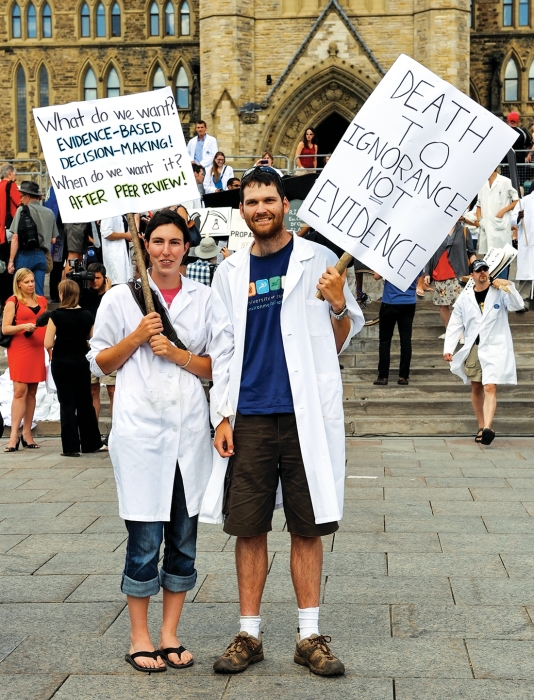 Credit: Paul McKinnon/Shutterstock.com
Scientists and activists hit Canadian streets beginning in 2012 to rally against what they claimed was a government attack on science.

After years of declining research budgets and alleged muzzling of government scientists, a new sense of enthusiasm and hope is spreading throughout Canada’s scientific community. Researchers are counting on Canada’s new prime minister, Justin Trudeau of the middle/left-leaning Liberal Party, to make good on key campaign promises—rebuilding science capacity in the country and adopting evidence-based policies.

Sworn in on Nov. 4, Trudeau replaces right-leaning Conservative Stephen Harper, who had served as Canada’s prime minister since 2006. Many scientists and advocacy groups are welcoming the political change.

Science and evidence-based decision-making in Canada “have both taken significant blows over the past 10 years,” says Katie Gibbs, executive director of the advocacy group Evidence for Democracy. The group organized rallies in several Canadian cities beginning in 2012 to protest the diminishing role of scientific evidence in government decisions. “This win is a huge step in the right direction for science in Canada,” Gibbs says.

Science played an outsized role in Canada’s general election when voters went to the polls on Oct. 19, says Michael Halpern, program manager of the Center for Science & Democracy at the advocacy group Union of Concerned Scientists.

Trudeau made several science-related campaign promises, including establishing the position of chief science officer to advise Canada’s Parliament. A similar position, chief science adviser, was eliminated in 2008. Trudeau also promised to allow government scientists to speak freely about their work, with limited exceptions, and to improve “open science communication” by creating a centralized place where government research results are publicly available. Government scientists under the Harper government claimed that they were forbidden from speaking freely about their work and from attending international meetings.

Canada science at a glance

Trudeau’s commitment to science, as well as diversity, is reflected in his Cabinet, says Cathleen Crudden, a professor of chemistry at Queen’s University in Ontario. Made up of 15 men and 15 women, Trudeau’s cabinet has two members devoted to science: a new minister of science as well as the minister of innovation, science, and economic development.

Under the Harper government there was a “perceived shift in funding to applied research away from basic research,” Crudden says. Harper’s government hoped to improve innovation in industry, she explains. New money went to projects with an industrial focus, she says. Now, many scientists are hoping newly appointed Minister of Science Kirsty Duncan, a medical geographer, will put an emphasis on basic science and help boost funding for such research.

Little has been heard from Duncan since she assumed her role. But on Nov. 9, she tweeted: “Hitting the ground running. Looking fwd 2 re-engaging the scientific community, ensuring evidence-based policies, & promoting #STEM.” Promoting science, technology, engineering, and mathematics (STEM) education is a stated priority for the Trudeau government.

Meanwhile, the Trudeau government appears to be ramping up efforts to address climate change, changing the environment minister’s title to minister of environment and climate change. Catherine McKenna, a lawyer, was chosen to serve in that post.

In one of the first moves under the new government, Navdeep Bains, newly appointed minister of innovation, science, and economic development, assured government scientists and experts that they “will be able to speak freely about their work to the media and the public.” The new government “values science and will treat scientists with respect,” Bains said in a Nov. 6 statement.

“Under the Harper government, any information that didn’t support predetermined policy decisions was squelched and controlled,” Halpern claims. As a result, public confidence in the work by government scientists decreased, he says.

Derek Muir, a senior research scientist at Environment Canada, a government agency, is hopeful that the change in leadership will make government science more visible to Canadians. “We are doing some cutting-edge research on emerging contaminants and on environmental forensics,” Muir says. Unfortunately, much of that work was kept under tight control by the former government, he adds.

One of Muir’s studies, which linked an increase in polyaromatic hydrocarbons in lake sediments with air emissions from Alberta oil sands industries, caught the attention of several reporters in November 2012. The work provided a way to discriminate industrial from natural sources of these toxic contaminants and raised new questions about potential risks of oil sands operations on freshwater ecosystems.

Muir recalls that his first request to speak to a journalist about the work took about a week to get approval from his agency’s media relations office. But the reporter was patient and eventually published the story. None of Muir’s subsequent requests for interviews related to that work were ever granted or denied. After long delays, journalists gave up and went elsewhere, he says.

“The media turned to my colleague, John Smol of Queen’s University, who did more than 50 interviews related to the paper,” Muir notes. “It was sad that the important role of government science in designing, setting up, and conducting the work was effectively underreported due to the media restriction,” he says.

Muir hopes that greater visibility for government science under Trudeau will translate into increased public confidence that good work is being done related to environmental issues. To that end, Bains, the minister of innovation, science , and economic development, said in his Nov. 6 statement, “We are working to make government science fully available to the public and will ensure that scientific analyses are considered in decision-making.”

In another change important to many researchers, the Trudeau government in its first few days reinstated Canada’s mandatory long-form census. The Harper government had eliminated it in 2010. Scientists say data collected in the long form are essential for monitoring social, health, economic, and environmental conditions. Restoring the long-form census “sends a promising signal that the new government plans to support Canada’s research community and evidence-based public policy,” says David Robinson, executive director of the Canadian Association of University Teachers, a group that represents academics.

In general, scientists in Canada are excited about new possibilities under the Trudeau government. The mood now compared with what it was like during the Harper government is like “night and day,” says David L. Bryce, a nuclear magnetic resonance spectroscopist and professor of chemistry at the University of Ottawa.

Bryce manages a national NMR user facility at the University of Ottawa. He describes the struggle to get funding the past few years to keep the facility’s 900-MHz NMR instrument running. If NMR equipment is shut down, it costs about $75,000 to start it up again, Bryce says. Several universities have stepped in to provide money to help keep the NMR instrument on-line, but it has been a scramble, Bryce tells C&EN.

Overall, science advocates are thrilled to see the new leadership in Canada putting so much emphasis on science. Last year, the Union of Concerned Scientists’ Halpern helped 800 scientists from about 30 countries write a letter to Harper, asking him to ease restrictions on the ability of government scientists to participate in the global scientific community. “The challenges we face are increasingly complex and global in scope,” Halpern says. “Scientists need access to Canadian data and Canadian scientists to do their best work.

“The new government is following through on a number of the easier commitments—appointing a minister of science, restoring the long-form census, and making pronouncements that the days of muzzling scientists are over,” Halpern continues. But creating a truly open and transparent culture among government agencies will take more time and a concerted effort by the government.

“The real test will come for the Trudeau government when the science is inconvenient to the politics,” Halpern says. “What will happen then?”