Another Big Merger For Pfizer

Mergers & Acquisitions: Megadeal pends as the sector steered toward specialty pharmaceuticals in 2015 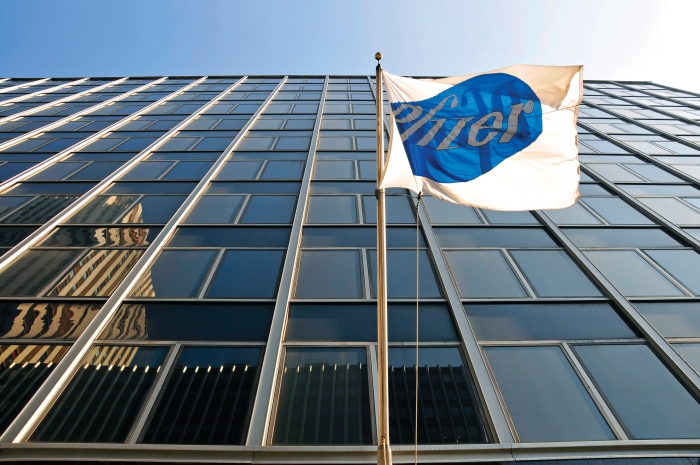 Pfizer Is At It Again

As 2015 closes, we find Pfizer managing another huge acquisition, this time with Allergan. Pfizer’s purchase of the Irish specialty drug firm for $160 billion, if successful, will create the world’s largest pharmaceutical company with sales of about $73 billion and close to 100,000 employees.

The deal once again focused the attention of financial markets on inversion, transactions in which a U.S. company purchases a smaller overseas firm and shifts its headquarters abroad to ease its tax burden. The purchase may also spur Pfizer to act on its stated intention of splitting into two companies, one focusing on new, patented pharmaceuticals and the other on older, specialty drugs.

The deal caps a year of mergers involving specialty pharmaceuticals, an amorphous category of high-value older drugs that often have special formulations and are sold under brand names. For example, Allergan merged with the specialty drug firm Actavis in March and later agreed to sell Actavis’s basic generics business to Teva Pharmaceutical Industries.

Teva says that purchase will bring its annual sales to $26 billion, giving it the distinction of being the only company among the largest pharmaceutical firms to focus on off-patent drugs. More shuffling in generics ensued later in the year, with UCB selling its U.S. generics business, Kremers Urban Pharmaceuticals, to Lannett, and with Cipla, an Indian drug firm, acquiring InvaGen Pharmaceuticals.

Meanwhile other deals went by the wayside, including Teva’s play for Mylan, another generics major, and Mylan’s bid for the store-brand specialist Perrigo.

Drug companies continued to acquire new expertise through acquisitions in 2015. Roche, for example, bought Dutalys, an Austrian firm specializing in fully human bispecific antibodies, in January. The same month it acquired Trophos, a Marseille-based biotech specializing in cholesterol-oxime chemistry for the protection of motor nerve cells. 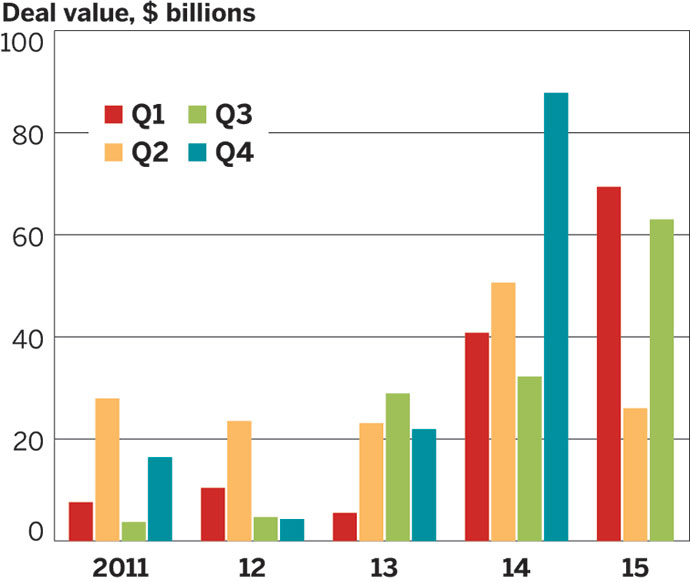 Novo Nordisk was among the drug companies with an eye on start-ups with innovative new drugs. The Danish firm acquired Calibrium and MB2, both diabetes-related start-ups cofounded by Richard DiMarchi, a chemistry professor at Indiana University.

Meanwhile, Valeant Pharmaceuticals made two interesting acquisitions this year that were overshadowed by scrutiny over its drug-pricing practices. The Canadian firm paid $800 million to acquire Amoun Pharmaceutical, the largest drug company in Egypt. In a riskier venture, Valeant paid $1 billion for Sprout Pharmaceuticals, the developer of a female sexual dysfunction therapy.

Overall deal value shot up in the first quarter, plummeted in the second, and rebounded in the third. By the end of the third quarter, the value of pharma mergers and acquisitions stood at about $158 billion, up from $124 billion for the first three quarters of 2014, according to market analysts EvaluatePharma.

The value of deal-making this year was on track to fall short of the total for last year, according to the consulting firm, given the downturn in the stock market and a strong fourth quarter that made 2014 a near-record year.

The gargantuan agreement between Pfizer and Allergan changes everything. It will count as a fourth-quarter deal in EvaluatePharma’s tally—provided it goes through. But that’s not a sure thing, given the vagaries of transatlantic mergers and the U.S. Department of the Treasury’s desire to put a stop to deals that are sapping its coffers of tax revenues.

Mergers & Acquisitions
The return of the megamerger
Mergers & Acquisitions
Chemical deals dip in third quarter
Finance
Major drug firms have active first half of 2019
Share X
To send an e-mail to multiple recipients, separate e-mail addresses with a comma, semicolon, or both.
Title: Another Big Merger For Pfizer
Author: Rick Mullin
Chemical & Engineering News will not share your email address with any other person or company.