Unboiling An Egg, A Sweet Way To Fry 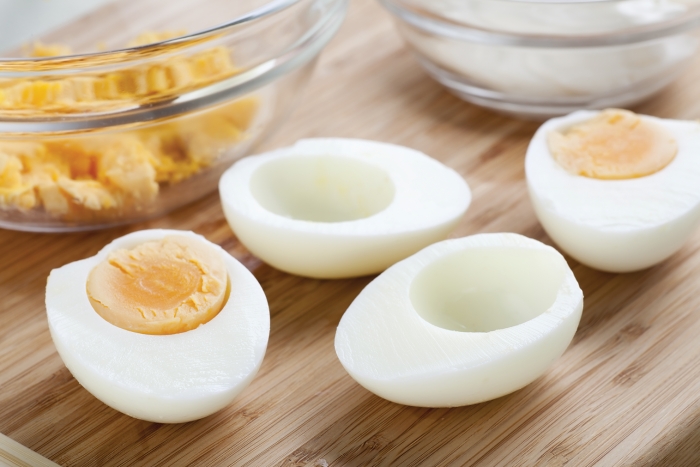 For decades, grandmothers have tried to ward off reckless behavior by warning that you can’t unboil an egg. But new research from University of California, Irvine, chemistry professor Gregory Weiss and his U.S. and Australian colleagues might mean a new linguistic caution is required.

The team has shown that it can untangle the sticky proteins that bind a hard-boiled egg white with a mechanical technique that physically pulls the proteins apart (ChemBioChem 2015, DOI: 10.1002/cbic.201402427).

Runny whites weren’t Weiss’s original aim, of course. His lab studies cancer-related proteins and coaxes bacteria to reproduce such proteins. But when those bacteria really ramp up, they produce so many proteins that they end up stuck together like overcooked spaghetti.

Before this technique, Weiss’s lab used to untangle the proteins via a chemical process that took five days for the proteins to return to their original shape. “That drives us crazy because it is so slow,” Weiss explains.

But this new technique takes just five minutes. The researchers dilute the protein mass and insert a device that pulls the proteins apart. The proteins then return to their original, unstuck shape. “I think a lot of chemists can appreciate that this is just thermodynamics,” Weiss says.

The technique worked great on the lab’s cancer proteins, but Weiss wasn’t sure reviewers would be convinced. “What are proteins that everyone knows are difficult to untangle?” he wondered. Then around breakfast time one morning he thought about a boiled egg, which is notoriously tough to crack. The technique was able to return the egg white to its original liquid state.

That isn’t the case for a new idea for healthier french fries and other fried snacks.

Chemical engineer and food scientist Keshavan Niranjan at the University of Reading, in England, has been working on ways to make fried snacks healthier by reducing the amount of oil used, but nothing he tried quite did the trick. 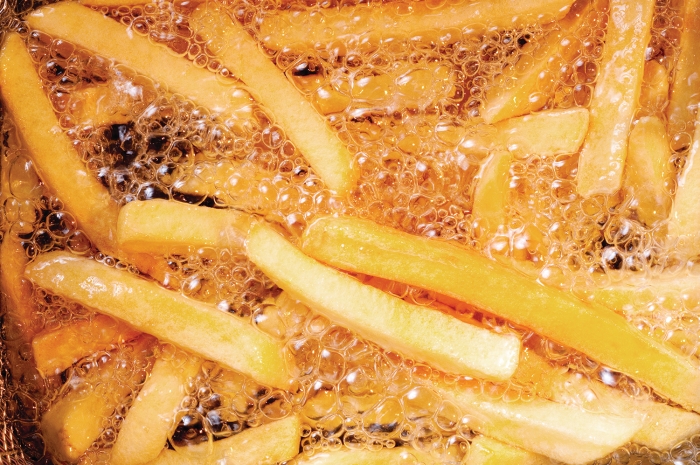 That’s when he got the idea to exchange the oil for another liquid. The challenge is that it would have to give a french fry the same crunch—“The real joy is in the initial bite,” he says—but without the high number of calories imparted by oil.

His search for a food-safe liquid that is hot enough to fry a potato led him to glucose, which melts around 140 °C. What’s more, liquid glucose can get up to the average oil frying temperature of 185 °C without much trouble.

When he fried potatoes in the molten glucose, they came out surprisingly similar to those fried in oil (J. Food Sci. 2014, DOI: 10.1111/1750-3841.12713). They turned a caramel brown color, and they had a familiar crunch. Niranjan also notes that frying in glucose slashes calories by about 80% compared with a deep-fat fried product.

Despite being fried in sugar, the glucose fries didn’t taste much different, Niranjan says. Potatoes already contain some glucose, and they didn’t absorb enough to make them sweet. While glucose can sometimes produce a bitter taste, he didn’t find that to be a problem either.

Niranjan is currently looking for a chef he can work with to test whether other people like them just as well as he and his students did. Although Niranjan doesn’t expect glucose to take over for oil anytime soon, he does hope it will inspire others to ask the question “Why are we stuck to fats for frying?”

Specialty Chemicals
The sugar wars are about to change your food label. Here’s why
Food Ingredients
Hating vegetables, loving cold coffee
Analytical Chemistry
Aromas could help us eat healthy
Share X
To send an e-mail to multiple recipients, separate e-mail addresses with a comma, semicolon, or both.
Title: Unboiling An Egg, A Sweet Way To Fry
Author: Andrea Widener
Chemical & Engineering News will not share your email address with any other person or company.