HOW IT WORKS
[+]Enlarge
Credit: Adapted from Angew. Chem. Int. Ed.
Englerin A binds to TRPC protein tetramers (four cylinders) in a kidney cancer cell membrane. This opens the central ion channel, which allows Ca2+ into the cell and leads to cell death. 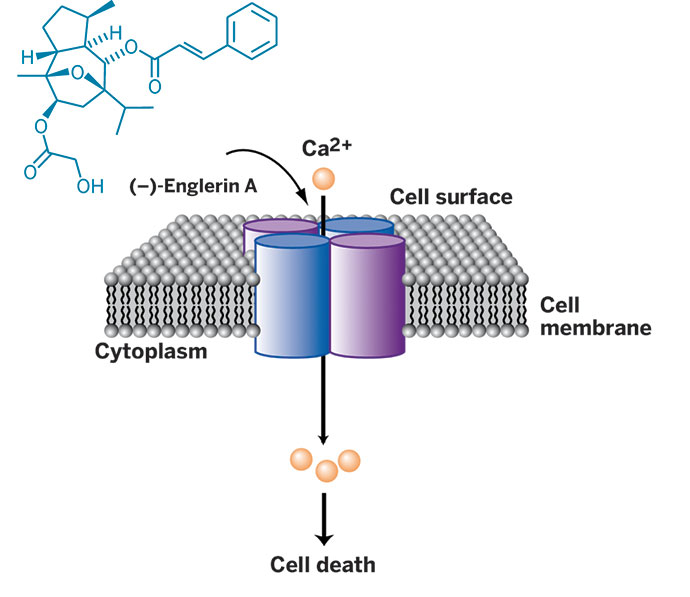 Credit: Adapted from Angew. Chem. Int. Ed.
Englerin A binds to TRPC protein tetramers (four cylinders) in a kidney cancer cell membrane. This opens the central ion channel, which allows Ca2+ into the cell and leads to cell death.

Since its discovery six years ago, the molecule (–)-englerin A has received a lot of attention from organic chemists and biologists. The natural product has a complex architecture that makes it a challenging synthetic target, and its ability to kill kidney cancer cells selectively makes it a promising drug lead.

But little is known about the mechanism behind englerin A’s anticancer properties. Now, in findings that could lead to new antitumor agents, researchers have discovered two cellular binding partners for the small molecule and have proposed the way it works.

Kidney cancer is often treated surgically and responds poorly to existing drugs, which can have serious side effects. So new drugs based on englerin A could help improve outcomes for patients.

In 2009, John Beutler of the National Cancer Institute (NCI), in Frederick, Md., and coworkers reported having isolated englerin A from the bark of Phyllanthus engleri, a southeastern African bush or small tree named after the late German botanist Adolf Engler. They discovered that the compound kills kidney cancer cells selectively (Org. Lett. 2009, DOI: 10.1021/ol802339w).

Christmann, Beech, Waldmann, and coworkers propose that englerin A works by overactivating the Ca2+ ion channels. But they don’t yet know why the agent selectively kills cancer cells, since some noncancerous cells express TRPC proteins as well. It’s also possible that the TRPC proteins and PKC-θ interact in some way, but right now “no one has any idea how,” Beutler says.

“It has been very tough identifying with any certainty what the specific targets of englerin A are,” says Joe W. Ramos, director of the Cancer Biology Program at the University of Hawaii Cancer Center, Manoa. “I have myself been trying for some time.” He calls the new study “a breakthrough” but notes that “it remains to be seen if englerin A will prove to be a viable drug.”

The Max Planck Society’s Lead Discovery Center and NCI are currently both trying to develop a drug candidate based on englerin A for treatment of kidney cancer.

Comments
anthony (November 13, 2015 9:46 AM)
Is it true that this englerin will be a drug later? Somebody says this is to toxic and many also says this is also big hope for next drug therapy.so which one is true? Thank you
Reply »

Englerin itself most likely is not suitable for use in humans. This is only an experimental compound that needs to be developed further. It is indeed fairly toxic, which is true for many anti-cancer drugs. Whether the use of Englerin or a different compound that has the same mode of action will yield a novel drug class is open for the time being