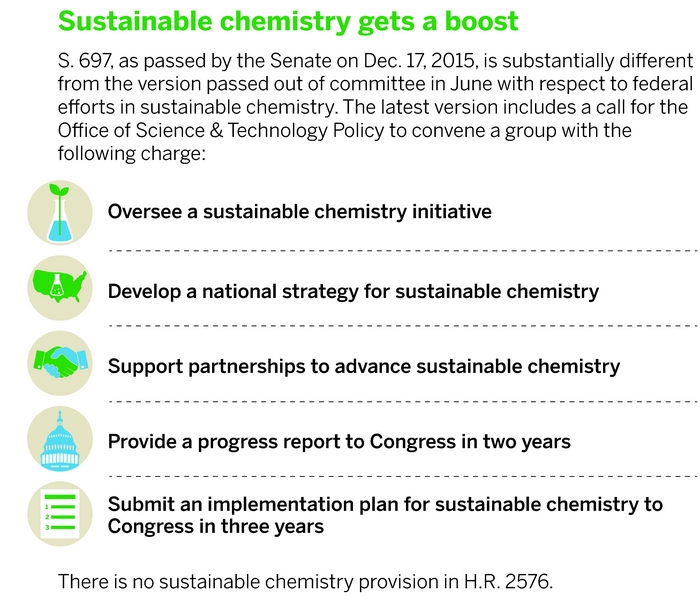 Members of the U.S. Congress hope to send legislation that would modernize the federal law that controls commercial chemicals to President Barack Obama early this year.

In an unanticipated vote, the Senate passed S. 697, which would reform the Toxic Substances Control Act (TSCA), just hours before it adjourned for the holidays last month. Congress then quickly launched negotiations to resolve differences between that bill and a similar measure approved by the House of Representatives. The House cleared its slimmer version, H.R. 2576, in June.

Lawmakers say they hope to have a new version of the legislation ready for a vote by both chambers early this year. But the process of getting S. 697 to the Senate floor was chock-full of obstacles, and a few bumps remain before the legislation is ready for the President’s signature.

The Senate bill has widespread support from the chemical industry and some environmental and public health organizations. Other activist groups oppose it.

The American Chemistry Council, which represents many chemical manufacturers, hailed the Senate vote. S. 697 “will protect human health and the environment, build confidence in the U.S. chemical regulatory system, and address the commercial and competitive needs of the U.S. chemical industry and the national economy,” says Cal Dooley, the group’s president and CEO.

Some scientific organizations are also welcoming the legislation, particularly a provision that aims to boost research and development in sustainable chemistry. The American Chemical Society, which publishes C&EN, “supports a sustainable vision for chemistry, and the Frank R. Lautenberg Chemicals Safety for the 21st Century Act”—the official name of S. 697—“is an important step in that direction,” says Glenn S. Ruskin, director of the ACS Office of Public Affairs.

Lautenberg was a Democratic senator from New Jersey who championed chemical safety legislation for decades. He was pivotal in the legislative process that led to last year’s action on TSCA reform, introducing a breakthrough bipartisan bill just weeks before his death in 2013.

S. 697 would also block states from taking action on a chemical because of toxicity concerns if the federal EPA is reviewing the substance, Igrejas points out. Sen. Barbara Boxer (D-Calif.) raised concerns about the legislation overriding state chemical laws, but senators eventually agreed to modifications that would preserve some state-level authority.

Even so, Boxer still has a few remaining concerns and nearly prevented the bill from getting to the Senate floor for a vote. Other senators assured her that she would be a part of the negotiations with House lawmakers to hammer out common legislative language on TSCA reform, so she agreed to allow the chamber’s vote to proceed.

“The voices of those who have been most deeply affected, including nurses, breast cancer survivors, asbestos victims, and children, will be heard” as Senate and House lawmakers negotiate on the final bill, Boxer says.