Credit: Nat. Commun.
An alkyne-labeled artemisinin analog (red sphere) binds to proteins in the malaria parasite. Biotin added via a click reaction allows artemisinin’s targets to be pulled out for affinity purification and mass spec identification.

First isolated in the 1970s, artemisinin is an effective drug against malaria, but questions remain about how it works. With the help of chemical proteomics, researchers have now shown that artemisinin kills the malaria parasite Plasmodium falciparum by indiscriminately binding to proteins in many of the organism’s key biochemical pathways. 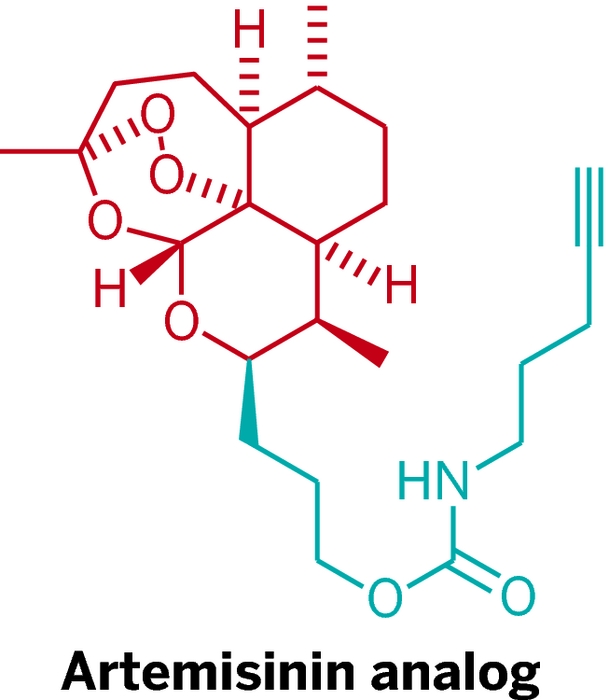 To identify the drug’s binding partners, a team led by Qingsong Lin, Kevin S. W. Tan, and Jigang Wang of National University of Singapore synthesized an alkyne-tagged artemisinin analog (Nat. Commun. 2015, DOI: 10.1038/ncomms10111). After incubating the probe with live malaria parasites and attaching biotin to its alkyne tag, the team fished out all the proteins to which artemisinin binds. The researchers did this by incubating the mixture with streptavidin-labeled beads that strongly attract biotin. They then identified the purified proteins with mass spectrometry.

The researchers were unsurprised to find that the probe bound to a whopping 124 different proteins. “The highly reactive and fast-acting nature of activated artemisinin suggests that it most likely has multiple targets,” Lin says. The fact that the drug has developed only low-level resistance after decades of extensive use bolsters this idea, too.

The drug’s promiscuity was first suggested by Steven R. Meshnick’s research team, which reported more than 20 years ago that radioisotope-labeled artemisinin binds to several parasite proteins (Antimicrob. Agents Chemother. 1994, DOI: 10.1128/aac.38.8.1854). Most of the proteins weren’t identified at the time, though, Wang explains.

“The central finding is consistent with previous lines of thought: Artemisinin has a fuse that is lit in the heme-rich parasite, where it then indiscriminately attacks like a bomb,” says Leila S. Ross, a postdoc studying malaria drug resistance in David A. Fidock’s lab at Columbia University. “Artemisinin kills by jamming up a large variety of cellular processes rather than a single pathway.”

But calling all of them “targets” of the drug would be a stretch, she says: “They seem to just be high-abundance proteins in the wrong place at the wrong time.”

Back when his team began studying artemisinin’s mechanism of action, Meshnick says, this idea was controversial, and technology at the time did not allow identification of the proteins. “Now, this elegant paper makes a convincing argument for heme-activated promiscuous protein modification,” says Meshnick, currently at the University of North Carolina, Chapel Hill. “This mechanism ties together the loose threads found in previous mechanisms.”

Comments
Dolores Claesson (December 28, 2015 6:31 PM)
Thanks so much for this research. I am particularly interested in protozoans since I appear to have Toxoxplasma gondii and Babesia. Many people with lyme disease have multiple protozoal infections and various herbal and anti protozoals may not work on all parasites. Artemisinin is used by many suffering with lyme and co infections.
Reply »

Richard K Haynes (December 30, 2015 3:09 PM)
Wow, this is amazing - an alkyne linker that for the parent AP1 is likely to be intercepted by either the O- or the ensuing C-radicals generated by Fenton chemistry involving the peroxide bridge and the ferrous heme. Evidently, however, the alkyne remains available for ensuing click chemistry for affinity labelling involving 'affected' proteins. So please enlighten: i. just what is the nature of the 'activated' artemisinin the authors talk about, and ii. how does the artemisinin residue then become bound to the protein...? Once again, the paper like rather too many others serves to confuse rather than to enlighten; it certainly does not provide a 'convincing argument for heme-activated protein modification' and actually generates further loose threads. Time for rational chemistry, please.
Reply »

Celia Arnaud (January 4, 2016 8:56 AM)
They validated several of the identified targets with binding experiments with individual enzymes in the presence or absence of heme. In experiments with ornithine aminotransferase, they found that binding required heme; the addition of free ferrous iron had no effect. They also found that chelating free iron had no effect on probe binding to OAT, but addition of an inhibitor that blocks hemoglobin digestion had a great effect. The mass spec data that they report in the paper and supporting information was for identification. I suppose you could look at the raw data, which they say were deposited in the ProteomeXchange Consortium, if you wanted to figure out where the probe binds on specific proteins.
Reply »

Richard K Haynes (December 30, 2015 3:12 PM)
PS: were control protein binding experiments carried out with the acetylene-tagged deoxyartemisinin at all?
Reply »

Celia Arnaud (January 4, 2016 8:30 AM)
They used DMSO as a negative control and performed co-incubation experiments with free-radical scavengers.
Reply »

Francesco Celani (December 30, 2015 4:28 PM)
I went to know that the artemisin as also some useful proprieties to "kill" some kind of cancer cells.
It is true?
Do You have more details about?

sarang kulkarni (August 31, 2016 8:07 AM)
As you said Artemisinin is not only potent antimalarial herb but as well as anti cancerous drug.. so why dont mainstream doctors recommend use of artemisinin to patients instead of chemo or radio
Reply »