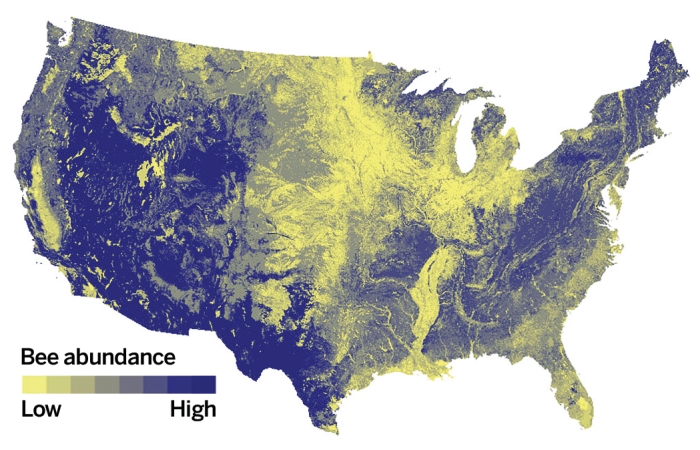 Credit: U of Vermont
In the U.S., areas with intense agriculture have low wild bee populations.

Estimates of wild bee populations fell in 23% of the contiguous U.S. from 2008 to 2013, according to a new national assessment of the status and trends of wild bees (Proc. Natl. Acad. Sci. USA 2015, DOI: 10.1073/pnas.1517685113). The project, funded by the Department of Agriculture’s Specialty Crop Research Initiative, shows that at the same time wild bee populations are decreasing, demand for crop pollination is increasing. The mismatch appears to be getting worse as natural habitats are converted to row crops, the researchers report. Led by postdoc Insu Koh of the University of Vermont, the team estimates that regions with intense agriculture, such as the Midwest Corn Belt and California’s Central Valley, have some of the lowest levels of wild bees. Several factors are thought to be contributing to the decline of bees and other pollinators, including habitat loss, pesticides, and climate change. The researchers suggest that farmers may need to restore habitats for wild bees around their farms or rely more on managed pollinators, such as hives tended by beekeepers.