A castle fit for a clean room

[+]Enlarge
Credit: Courtesy of Sikkema, Jenkins & Co.
Down to size: Eltz Castle looks as good on a 300-µm-wide grain of sand as it does in real life. 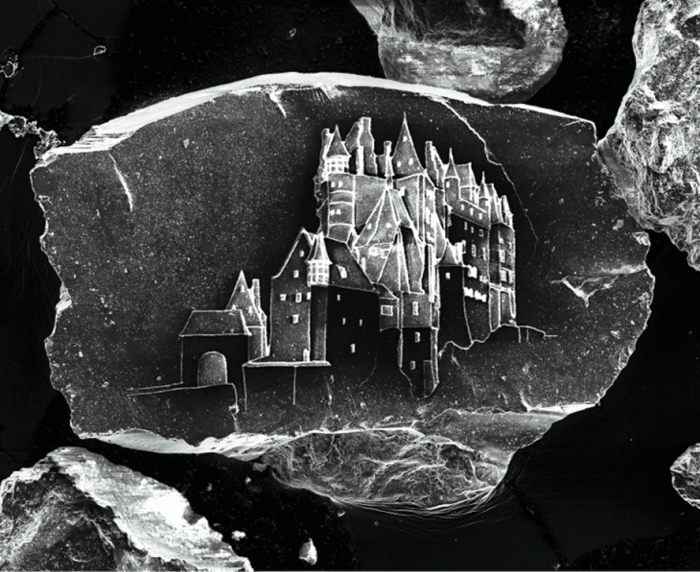 Credit: Courtesy of Sikkema, Jenkins & Co.
Down to size: Eltz Castle looks as good on a 300-µm-wide grain of sand as it does in real life.

Sculpting castles out of sand is, some might say, child’s play. But sculpting an entire castle on a single grain of sand, as Marcelo Coelho and Vik Muniz have done, takes tools that are considerably more sophisticated than a bucket and spade.

Muniz approached Coelho with the idea for “Sandcastles,” a series of drawings of castles carved into individual grains of sand, while the two were at Massachusetts Institute of Technology. Their alliance made sense: Both work to find innovative uses for materials; both are from São Paulo, Brazil. But the nature of the collaboration was unusual for a duo working out of MIT. Coelho, a designer, was a graduate student at the time researching programmable materials and digital fabrication, and Muniz was a visiting artist at MIT’s Center for Art, Science & Technology.

Coelho admits he thought Muniz was joking when he asked if it was possible to create “Sandcastles,” which was finished in 2013 and took almost four years to engineer and complete. Images of the drawings blown up to visible size are now on display at the High Museum of Art in Atlanta.

Coelho began his experiments, trying and often failing to find a viable method. Laser etching often destroyed grains that were too soft. Drawings wouldn’t show up on grains that were too hard. “Sometimes I asked myself, ‘Should I just do this in Photoshop?’ ” he told the Creators Project, an arts and technology website founded by Vice Media and Intel. But lucky for the artists, MIT’s focused gallium-ion beam did the trick. The instrument allowed them to upload a drawing of the castles and produced the etching within a few minutes.

As with most large university instruments, the artists had to vie for time to use the ion beam, competing with other MIT researchers. Coelho tells Newscripts that there were “no disputes, but the machine is always busy.” 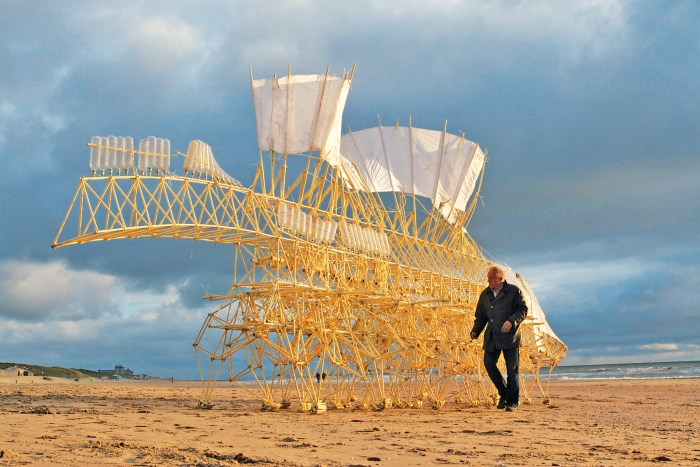 Theo Jansen, a Dutch artist, has been making waves since 1990 with his so-called Strandbeests (derived from the Dutch words for “beach” and “beast”). Products of engineering and experimentation, these meters-long creations made of polyvinyl chloride pipes are Jansen’s attempt to build a wind-powered, self-sufficient, moving animal.

Commonly set up on the beach, the PVC pipes form dozens of legs around a central rotating shaft that each take turns stepping, making the scaffold walk when wind catches its sails.

Jansen began working as an artist in 1974 after leaving the Institute of Technology, in Delft, the Netherlands, where he was studying physics. In addition to the fundamental system of joints and linkages in the legs, Jansen has also invented survival mechanisms for the creatures. For example, because a Strandbeest can easily “drown” in the sea, a dangling air hose can sense danger when it gets clogged with water, triggering an anchoring and reversing mechanism that allows the Strandbeest to reroute and escape.

Some members of Jansen’s herd can even store energy by compressing surrounding air in 2-L bottles. The stored air can be released to move the legs, allowing the structures to walk independent of whether the wind is blowing. Long-term, Jansen wishes to invent something so self-sufficient that it can reproduce autonomously.

The Strandbeests are currently making their way across the U.S. as part of a traveling exhibit that is at the Chicago Cultural Center currently and will be on display at the Exploratorium in San Francisco starting May 27.

Polymers
3M takes a wrap on innovative thinking
Materials
BASF resin aids Reebok shoe project
Environment
A furry tale
Share X
To send an e-mail to multiple recipients, separate e-mail addresses with a comma, semicolon, or both.
Title: Sea, sand, and science
Author: Manny I. Fox Morone
Chemical & Engineering News will not share your email address with any other person or company.