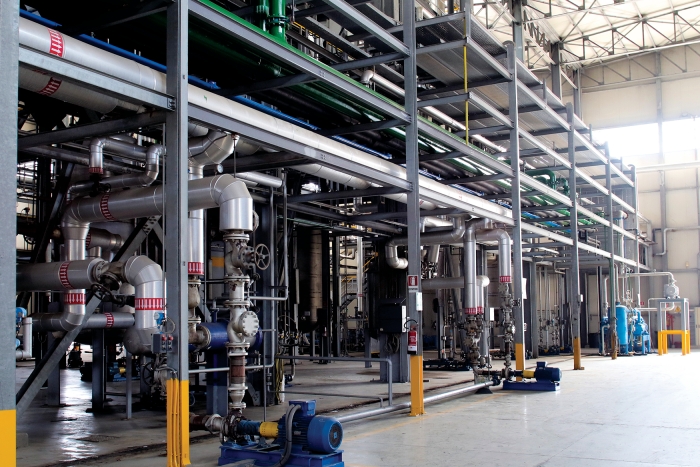 Among the lemon trees and mountains of southern Italy, the start-up company GFBiochemicals has developed a process that, it claims, slashes the cost of making levulinic acid, a five-carbon building block chemical.

Ever since the Dutch professor Gerardus Johannes Mulder discovered levulinic acid in 1840, chemists have coveted it as a starting material for agrochemicals, pharmaceuticals, solvents, fragrances and flavorings, plasticizers, and fuels. But levulinic acid proved expensive to manufacture at large scale and remained mostly in the lab.

What levulinic acid is sold today comes from Chinese companies that make it using a three-step process starting from corn-derived furfuryl alcohol. GF is betting it can undercut them with its one-step thermochemical conversion of plant-based material.

Executives say levulinic acid could be the next big biobased chemical, joining the ranks of successful materials such as succinic acid, lactic acid, and 1,3-propanediol. But because levulinic acid is not yet widely used, the firm will have to educate and encourage customers. Failure to do so could relegate the acid to the dustbin of chemical curiosities.

GF started producing levulinic acid in July 2015 at a 10,000-metric-ton-per-year plant in Caserta, a few kilometers south of Naples. The firm, which employs 32 people, is currently making more than 1,200 metric tons per year and says it is on track to increase that to 4,500 metric tons in 2016.

GF’s process involves pretreating a biobased feedstock—currently corn—using acid hydrolysis under high pressure and temperature to release C6 sugars. The sugars are then converted into levulinic acid in the presence of water and a proprietary homogeneous inorganic catalyst. High-performance liquid chromatography columns then isolate levulinic acid.

For every three molecules of levulinic acid produced, the process generates one molecule of formic acid. The firm currently treats formic acid as waste, but in the coming years, it plans to sell the acid to Italy’s leather industry, which uses it in tanning.

Other by-products are char and tar. By burning them, GF says it will generate enough heat to run its process. At present, the firm is using natural gas, says Aris de Rijke, the firm’s director of technology and engineering.

GF is backed by several private investors, including the wealthy French soccer player Mathieu Flamini, who plays for the London club Arsenal. The firm is keeping tight-lipped about its other investors as well as the details of its technology, which includes a patent-pending purification and recovery system. 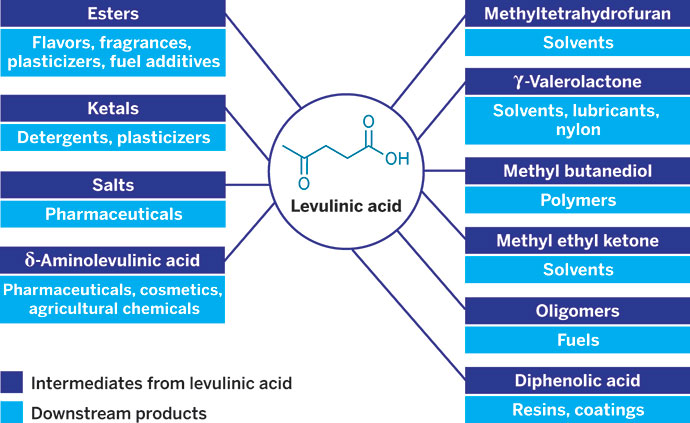 Purification was “quite a problem, but we have sorted it,” de Rijke says. GF developed the conversion, recovery, and purification technologies in association with scientists at the University of Pisa and the Polytechnic University of Milan.

Van Berkel, Katinov, and de Rijke are three of four former managers from the Dutch chemical firm DSM on GF’s six-person executive board. They were drafted during the past few years to replace an all-Italian leadership team.

Katinov is optimistic that the firm will make money in the near term. “With improvements in economies of scale, once we hit 4,000 tons per year, we will be profitable,” he says. In the coming years, GF is targeting a production cost of $1.00 per kg.

More immediately, GF plans to produce 10,000 metric tons per year by 2017. That would be more than three times China’s levulinic acid production, which the San Francisco-based market research firm Grand View Research estimates to have been 2,600 metric tons in 2013.

But GF remains bullish that lower prices will open up the market. Executives cite reports from the chemical information service ICIS that global sales of levulinic acid and its derivatives could top $2 billion annually in the next 10 years.

“The toughest part is assessing which are the best market opportunities. You’ve got to really focus,” Katinov says. For the next 10 years, the firm is targeting high-value applications in pharmaceuticals, flavors, personal care products, and coatings.

The findings of a recent survey by Biofuels Digest, a biofuels and materials news service, suggest GF has a lot of work on its hands to educate prospective customers about its product. Of the more than 150 industrialists surveyed, 26% said they had never heard of levulinic acid, 54% had heard of it but did not know about its applications, and 20% were very familiar with it but had never used it.

Developing the market for levulinic acid will not be without its challenges, according to Julia Allen, head of biobased materials and chemicals for the market research firm Lux Research.

Building the market may be trickier than for succinic acid, another emerging biobased building block. Industry heavyweights BASF, Corbion Purac, and DSM are involved with succinic acid while only small firms, with their smaller market reach, are producing levulinic acid, Allen points out. GF will likely need to develop strong partnerships if it is to succeed, she says.

Moreover, the current low price of oil and gas would appear to be a stumbling block for any company developing chemicals from non-fossil-fuel feedstocks. Katinov counters that levulinic acid and its derivatives promise enough performance novelty that GF will feel little impact from the low cost of fossil fuels.

In fact, the firm is already eyeing the construction of larger plants in locations including Northern Europe, the U.S., and Brazil. The firm is hoping to build a 50,000-metric-ton-per-year facility in 2019.

GF might have big plans, but its executives say they remain realistic. Although it is based in Italy and has a soccer star as an investor, the firm has modest offices and there are no Ferraris in the parking lot. “We have to start making money first,” de Rijke says.

Biobased Chemicals
Avantium starts producing biobased ethylene glycol
Biobased Chemicals
Succinic acid, once a biobased chemical star, is barely being made
Environment
Novamont opens bio-BDO plant
Share X
To send an e-mail to multiple recipients, separate e-mail addresses with a comma, semicolon, or both.
Title: One Company’s Big Plans For Levulinic Acid
Author: Alex Scott
Chemical & Engineering News will not share your email address with any other person or company.