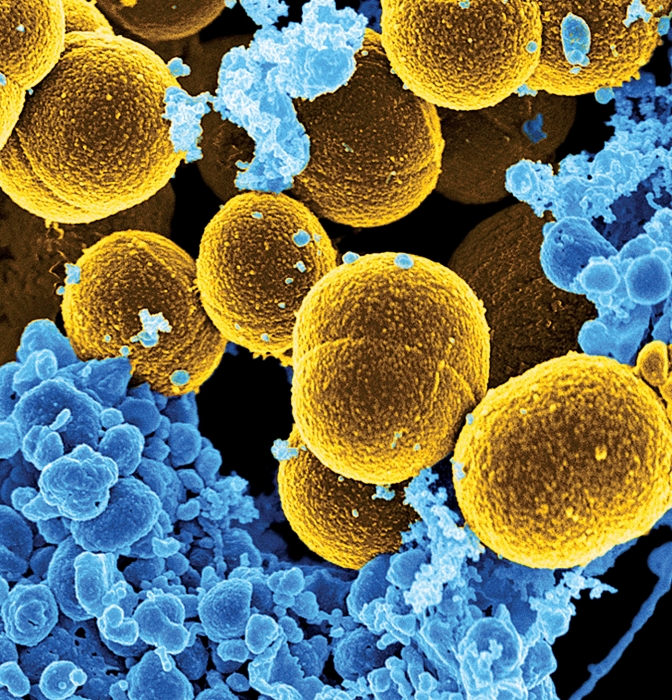 When the common human pathogen Staphylococcus aureus needs to stock up on metals to further its virulent agenda, the bacterium exports a small molecule called staphylopine, according to a new study (Science 2016, DOI: 10.1126/science.aaf1018). This compound’s small stature belies an impressive skill set: Staphylopine can bind nickel, cobalt, zinc, copper, and iron, making it a highly dexterous metallophore, says Pascal Arnoux, who led the research at the Biosciences & Biotechnology Institute, in Aix-Marseille, France. Once the molecular metal lure has snagged its cargo from the environment or from a host, S. aureus imports staphylopine and its payload back inside.

“The vast majority of pathogens use small molecules to chelate iron, but the idea of a broad-spectrum metallophore that can help a pathogen acquire metals in a host is really interesting—the idea has been talked about, but never proven,” comments Eric Skaar, who studies bacterial metal trafficking at Vanderbilt University.

“Many studies using animal models of infection have shown that the ability of a pathogen to acquire nutrient metals confers virulence,” writes MIT biochemist Elizabeth Nolan in an accompanying commentary (Science 2016, DOI: 10.1126/science.aaf8755).

Genes that code for the cellular machinery that exports staphylopine had previously been linked with S. aureus virulence and growth—long before their association with staphylopine was discovered, Arnoux says. Given this connection to virulence, Arnoux adds, researchers devising new antibiotics may consider targeting the proteins used to traffic staphylopine so that the pathogen can’t collect the metals it needs for survival.

Staphylopine proteins “could make great antibiotic targets, but there are a lot of ‘ifs’ ” that come with that strategy, Skaar cautions. For example, he says researchers need to confirm that mutating the biosynthetic and export proteins impairs the pathogen’s growth and virulence in animal models. Researchers should also confirm that staphylopine plays a similar role in the nefarious superbug MRSA (methicillin-resistant S. aureus).

S. aureus may not be the only human pathogen to use a staphylopine-like metal chelator. Arnoux’s team has also found homologous genes for staphylopine production and export in two other major human pathogens: Yersinia pestis, the causative agent of plague, and Pseudomonas aeruginosa, which infects the lungs of cystic fibrosis patients. But the promiscuous metal-collecting machinery is absent from most other bacteria and archaea genomes, Arnoux says. This could be beneficial, he adds, because it suggests that drugs targeting the machinery might have little impact on a patient’s healthy microbiome.

Curiously, the structure for staphylopine is very similar to nicotianamine, a broad-spectrum metal chelator in plants. The shared structure is clearly an ancient metal-collecting scaffold, Arnoux says. However, he’s still trying to uncover whether plants and some bacteria independently evolved similar machinery for chelating metals promiscuously or whether plants nabbed the skill from bacteria through gene transfer.