Biologists evolve a reverse transcriptase that can proofread

The enzyme copies RNA into DNA without making mistakes 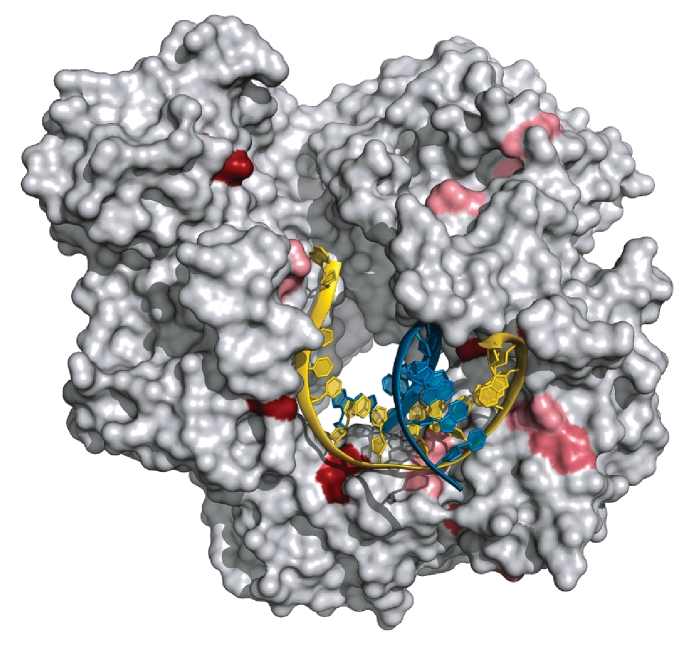 Credit: AAAS/Science
This turncoat enzyme was evolved from a DNA polymerase into a reverse transcriptase. Residues essential (red) and important (pink) for the new functionality are highlighted. The template RNA strand is indicated in yellow, and the elongating DNA strand is blue.

One of the hallmarks of many DNA polymerases is that they proofread as they copy DNA, ensuring high-fidelity duplicates of an organism’s genome. This error-checking ability is missing from enzymes called reverse transcriptases, which copy RNA sequences to DNA.

At least, that was the case until researchers led by Jared W. Ellefson and Andrew D. Ellington at the University of Texas, Austin, used directed evolution to convert a DNA polymerase to a proofreading reverse transcriptase (Science, 2016, DOI: 10.1126/science.aaf5409).

The new enzyme might find use in labs wishing to do accurate sequencing of RNAs in cells, Ellefson says. Normally, this process involves converting RNA to DNA, which gets amplified using polymerase chain reaction techniques. If researchers are analyzing RNA from a single cell, any mistakes in the conversion from RNA to DNA also get amplified. “This enzyme could be a game changer for single-cell analyses,” comments Vitor Pinheiro, who engineers DNA polymerases at University College London.

Reverse transcriptases catalyze nearly the same reaction as do DNA polymerases. Both connect up DNA bases following a nucleic acid template—it’s just the template that differs. So the researchers had to evolve a DNA polymerase that reads an RNA template instead of a DNA one.

To do so, the team introduced a library of randomly mutated DNA polymerases into Escherichia coli cells. Then they inserted a few RNA bases into strings of DNA that are necessary for the enzymes’ function, forcing the DNA polymerases to develop reverse transcriptase skills. The team repeated the process, increasing the number of RNA bases, until the bacteria’s DNA polymerases could fully read RNAs while maintaining their proofreading skills. The conversion required about a dozen amino acid mutations in the DNA polymerase.

The work also resolved a long-standing conundrum in evolutionary biochemistry, Ellefson says. Namely, why are reverse transcriptase enzymes inherently error-prone, while many DNA polymerases have exquisite accuracy? The relatively minor changes needed to evolve an error-prone reverse transciptase suggest that sloppy copying may confer evolutionary advantage to organisms using the enzymes. For example, HIV uses reverse transcriptases to copy its RNA genome into DNA to then insert into a host’s genome. Copy errors likely enable HIV’s rapid evolution, allowing the pathogen to stay one step ahead of human immune systems, Pinheiro adds.

The work also suggests that DNA polymerases could be evolved to accommodate other nucleic acids besides RNA—perhaps synthetic ones. However, Pinheiro cautions that synthetic biologists may not want to give engineered organisms the ability to convert synthetic nucleic acids to DNA, thereby keeping them separate from the natural world.

Comments
Gary T Ramsey (June 24, 2016 12:28 PM)
Caution must be exercised but the control of evolutionary processes as evidenced by the wolf and the chihuahua is as old as the story of mankind better tools lead to more advances in knowledge which in turn creates ever better tools of discovery.
Reply »