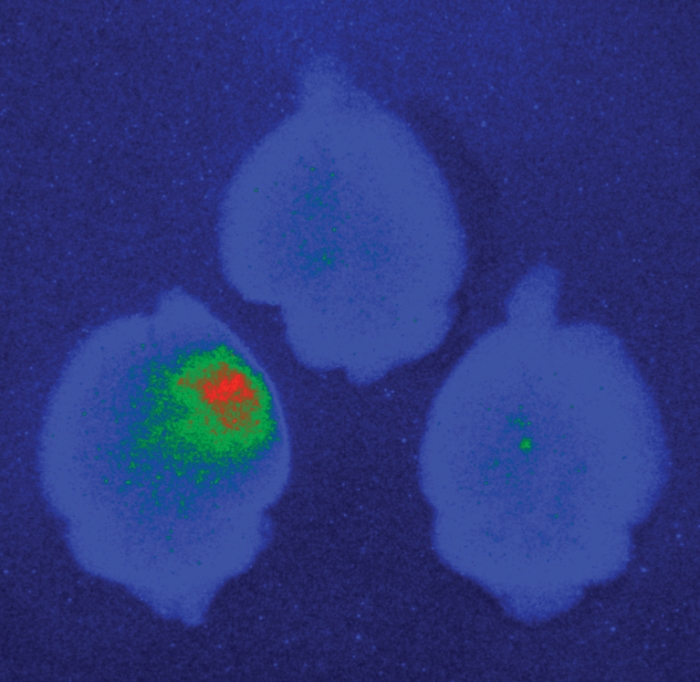 Researchers have found a four-amino-acid peptide that selectively binds to sites of injury in the brain. Such a peptide could help guide small molecules, proteins, and nanoparticles designed to detect or treat traumatic brain injury, the scientists say.

Currently, there are no good treatments to limit the long-term damage caused by traumatic brain injuries experienced by accident victims or military personnel. Erkki Ruoslahti of the Sanford Burnham Prebys Medical Discovery Institute and coworkers developed the peptide as part of a project funded by the Defense Advanced Research Projects Agency (DARPA).

The scientists created a library of phage viruses that express short peptides on their surfaces and injected them into mice that had received injuries comparable to those experienced by people on battlefields. After 30 minutes, the scientists harvested the viruses that had accumulated at the injury sites and found that they were enriched with peptides containing a particular four-amino-acid sequence: cysteine, alanine, glutamine, and lysine, or CAQK (Nat. Comm. 2016, DOI: 10.1038/ncomms11980).

In a series of experiments, Ruoslahti and his colleagues observed that the peptide didn’t accumulate in healthy brain tissue or in injured skin or liver tissue—just at sites of brain injuries. This surprised Ruoslahti: “It is a very short stretch of amino acids to get this kind of specificity.”

The team went on to demonstrate that dye molecules and nanoparticles could home in on brain injury sites when tethered to the CAQK peptide.

Using mass spectrometry proteomic methods, the researchers determined that the peptide binds to glycoproteins in the brain’s extracellular matrix—the sugar and protein scaffolding that surrounds cells. Levels of these proteins increase after brain injuries.

Ruoslahti says the team is now trying to determine how mild of a brain injury this peptide can detect.

The work is “rigorous, creative, and potentially highly valuable in terms of one day specifically targeting therapeutic agents to injured tissue,” says Andrew A. Pieper, a neuroscientist and professor of psychiatry at the University of Iowa. “This targeting could concentrate drugs at the injury site, allowing doctors to administer lower doses, which could reduce the likelihood of harmful side effects.”