Low-protein diet given to pregnant mice can interact with their offspring’s DNA, leading to low weight throughout the progeny’s lifetime, study finds 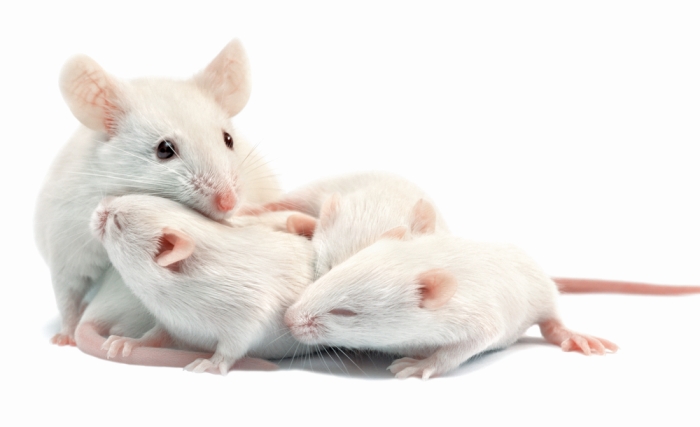 Credit: Shutterstock
A mother’s diet during pregnancy can impact her offspring’s lifelong health.

Pregnant mice fed low-protein diets have progeny that are underweight all the way through adulthood, a new study shows. These results hold true, however, only if the mice have relatively more adenine than cytidine bases in a certain region of their genomes. The work directly shows how early environmental impacts could interact with an individual’s DNA to alter long-term health.

“People debate nature versus nurture, but our work shows how separating genetics and environment is artificial—and impossible,” says Vardhman K. Rakyan at Queen Mary University of London, who led the research.

Rakyan’s team carefully scrutinized a section of the rodents’ DNA that promotes RNA production. This RNA, in turn, forms the ribosome, a protein synthesis machine (Science 2016, DOI: 10.1126/science.aaf7040). Mice—and humans—have many copies of ribosomal DNA in their genomes.

If the section of the rodents’ genome preceding a copy of ribosomal DNA—called the promoter region—had an adenosine rather than a cytosine, then nearby DNA was more likely to become methylated. This methylation reduced the translation of ribosomal DNA into RNA, which, the team suggests, could interfere with ribosomal function and, thus, the ability of the cell to produce proteins. Such an effect could account for the decrease in the mouse offspring’s body weight, Rakyan notes.

For Oliver J. Rando of the University of Massachusetts Medical School, one of the most interesting observations in Rakyan’s paper was that the methylation caused by the low-protein diet was found in the sperm of the progeny mice, suggesting that the prenatal nutrition deficit could affect second-generation offspring.

The next step should be to see whether this discovery applies to humans, comments Bas Heijmans at Leiden University Medical Center. Heijmans would also like to know if a similar ribosomal DNA mechanism is responsible for later-life outcomes—such as a higher propensity for insulin resistance, obesity, and schizophrenia—seen in the progeny of human mothers subjected to prenatal nutritional deficits.