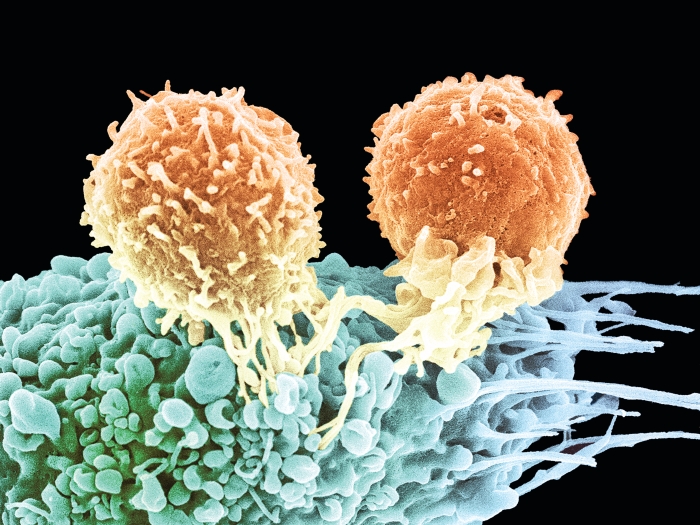 Credit: Steve Gschmeissner / Science Source
Two T cells (each about 10 µm in diameter) bind to a cancer cell (blue), the first step in an immune response.

Many tumors contain lurking immune cells, including T cells that are equipped to attack the cancerous tissue. But the chemistry inside the tumor silences these T cells, allowing the cancer to persist and grow.

A team of scientists report that high levels of potassium ions are part of the tumor chemistry that blocks T cell activity. The researchers found that engineering T cells to adjust to these high potassium concentrations improved the cells’ ability to attack tumors in mice (Nature 2016, DOI: 10.1038/nature19364).

These findings add to a growing list of mechanisms that cancers use to evade recognition by the immune system. For example, tumors hijack native signaling molecules called immune checkpoints to inhibit the activation of T cells. In the past several years, the U.S. Food & Drug Administration has approved therapies that block these checkpoint molecules.

Nicholas P. Restifo and colleagues at the National Cancer Institute have been studying how basic aspects of cell function, such as metabolism, affect immune cell function. They decided to study potassium ion levels in the fluid inside tumors based on insights from cancer surgeons. “When you operate on a tumor and take it out and cut through it, it can have liquefied necrotic areas within the tumor,” Restifo says. So the researchers wondered what the impact of these inner dying cells had on the tumor environment.

When the researchers analyzed the fluid inside mouse and human tumors, they found that potassium ion levels were elevated relative to those outside the tumors. In cell culture studies, T cells bathed in such high potassium concentrations mounted smaller responses to antigens than did cells exposed to average potassium levels.

Typically, when T cells encounter their target antigen, they release cytokines to signal other immune cells to attack. Through a series of experiments, the scientists found that the high extracellular potassium ion concentrations cause intracellular levels of the ion to increase, which in turn disrupts the signaling pathway necessary to trigger a normal cytokine response.

The researchers determined that T cells could still respond to antigens in high potassium solutions if the cells got some help with exporting some of their intracellular potassium. The scientists accomplished this by engineering the cells to express large numbers of a protein channel that allows potassium ions to flow out of the cell. Mice injected with such engineered T cells were better at attacking the tumors and survived longer than mice receiving nonengineered cells.

“[The] findings have potentially paved the way for therapies that enhance the ability of our immune systems to combat cancers,” write K. George Chandy of Nanyang Technological University and Raymond S. Norton of Monash University in a perspective that accompanies the paper in Nature.

Chandy and Norton wonder if molecules that enhance the activity of protein channels similar to the one in this study could help restore T cell function deep inside tumors.

Eil thinks the findings could enhance therapies in which a patient’s own immune cells are reprogrammed to target tumor cells. Such therapies are already in clinical trials. Engineering the reprogrammed cells to better respond to high potassium levels, Eil says, could increase their efficacy.