Sit On Your Phone, Pee In Your Socks

Sitting on a smartphone and peeing into a pair of socks isn’t on everyone’s to-do list. But thanks to scientific developments, people may have a better chance of getting away with doing the first, and—strange as it sounds—doing the second could one day save your life. 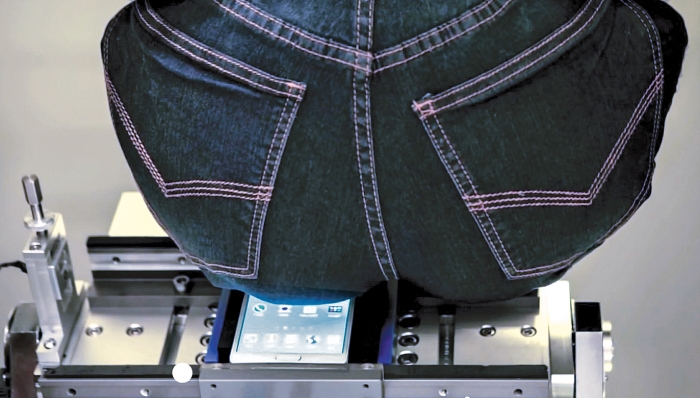 When it comes to designing phones that people can sit on and not break, South Korea’s Samsung thinks it has the weighty problem covered. The firm’s scientists have replaced a standard three-point pressure test with a robot featuring a humanlike bottom. The robotic gluteus maximus weighs in at a robust 100 kg and even wears a pair of jeans. While most people accidentally sit on their phone occasionally, Samsung ensures its robotic bottom sits on its phones several hundred times.

Samsung has used the robotic rear to test its Galaxy Note 4 smartphone. The dummy derriere is “the secret behind the force durability of the Galaxy Note 4,” the firm says. And to withstand being sat upon, the Note 4 was designed by Samsung with a metal frame, a magnesium bracket, and a reinforcing structure between parts.

Now that you’ve sat on your phone, perhaps it’s time to pee in your socks. And just as some phones may be stronger than others, not just any socks will suffice.

[+]Enlarge
Credit: The Bristol Robotics Laboratory at UWE Bristol
Sock it to me: Microbial fuel-cell socks could send emergency messages. 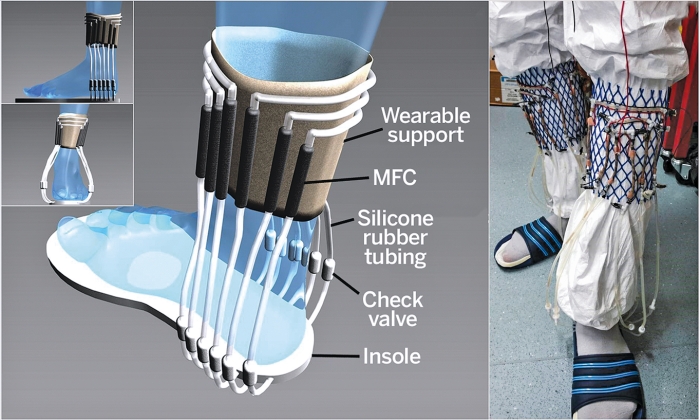 Credit: The Bristol Robotics Laboratory at UWE Bristol
Sock it to me: Microbial fuel-cell socks could send emergency messages.

Ideally, they should only be experimental socks made by University of the West of England professor Ioannis Ieropoulos. Only these feature urine-containing tubes and miniaturized microbial fuel cells (MFCs). When someone takes a pee in the tubes, the urine acts as a fuel for the MFCs, which generate electricity.

By walking around, the wearer causes silicone tubes with integrated valves to compress under the heel and act as pumps that circulate urine over the MFCs.

The MFCs consist of an anode and cathode separated by a membrane. The microbes, sourced in this case from anaerobic sludge from a wastewater treatment plant, oxidize the urine, generating CO2, electrons, and protons—thus producing electricity.

Along with the tubing for the urine, 12 pairs of MFCs are wired into each sock. When Ieropoulos and his team strolled in the socks at 90 steps per minute, they were able to generate 4 V of electricity. This was enough to charge two supercapacitors, which powered a transmission unit that repeatedly sent the message, “world’s first wearable MFC.”

“This work opens up the possibility of using waste for powering portable and wearable electronics,” Ieropoulos tells Newscripts. What’s more, the wearable MFC technology could be used to transmit a person’s coordinates in an emergency situation, he says.

For those who often sit on and damage their phones, don’t mind peeing in their socks, and find themselves in emergency situations, there is now hope.

Energy Storage
New battery could serve the grid
Materials
Spinning a triboelectric yarn
Materials
Spinning yarn for a wash-and-wear energy harvester
Share X
To send an e-mail to multiple recipients, separate e-mail addresses with a comma, semicolon, or both.
Title: Sit On Your Phone, Pee In Your Socks
Author: Alex Scott
Chemical & Engineering News will not share your email address with any other person or company.