Artificial metalloenzyme is most efficient ever 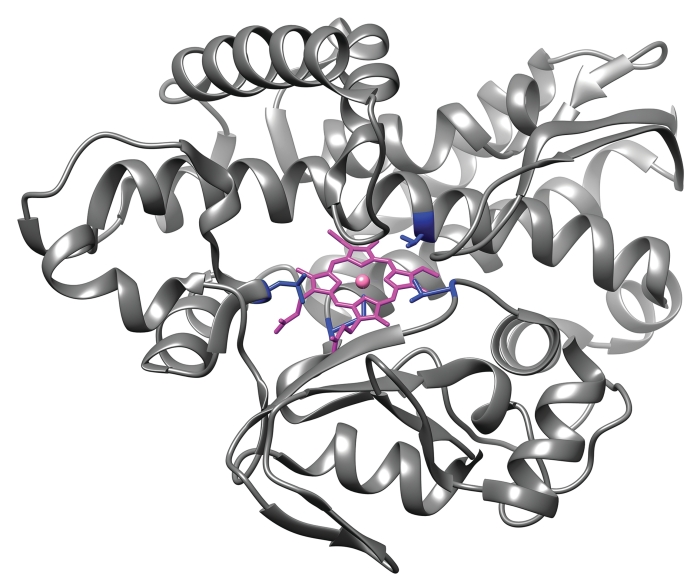 Credit: Courtesy of Hanna Key
In the modified metalloprotein Ir(Me)-PIX CYP119-Max, the protein backbone is gray and the residues changed by directed evolution are blue. The active site iridium and porphyrin are the central sphere and surrounding purplish macrocycle, respectively.

A new artificial metalloenzyme has broken an efficiency record: It’s 1,000 times as efficient as previous artificial metalloenzymes in carrying out non-biological reactions. It’s also the first that’s about as efficient as some natural biological enzymes, even though it catalyzes stereoselective organic reactions that natural enzymes can’t handle. The synthetic enzyme could lead to artificial catalysts efficient enough to accelerate stereoselective organic reactions on an industrial scale.

They created it using a strategy they reported just a few months ago (Nature 2016, DOI: 10.1038/nature17968 and C&EN, June 20, page 6). In that study, they introduced the idea of changing the active-site metal of a metalloenzyme like myoglobin and then subjecting the modified protein to directed evolution.

This time, instead of using myoglobin, the team started with a thermophilic cytochrome P450 called CYP119. Hartwig and coworkers noted that CYP119’s binding site, which is larger and more hydrophobic than myoglobin’s, accommodates organic molecules, whereas native myoglobin binds dioxygen. And CYP119 has relatively high thermal stability, so they predicted that modified versions would be stable enough to catalyze reactions quickly and repeatedly.

The researchers therefore replaced CYP119’s active-site iron with iridium and used rounds of directed evolution to create revised structures. The best performing metalloenzyme that emerged from the modification process is called Ir(Me)-PIX CYP119-Max. It catalyzes carbene insertion into activated C–H bonds (adjacent to electron-donating oxygen atoms), unactivated C–H bonds, and sterically hindered C–H bonds. It works at 2,550 reaction cycles per hour, comparable to the efficiency of natural enzymes. It is stereoselective, generating enantiomeric excesses up to 98%. It has good longevity of action, catalyzing 35,000 reaction cycles before running out of steam. And it works well when immobilized on a solid support, which could be useful industrially.

Its favorable properties mean small amounts of the catalyst might be practical for industrial reactions, comments artificial metalloenzyme expert Thomas R. Ward of the University of Basel. By identifying the right protein on which to base their design, Hartwig and coworkers “have laid their hands on a gold mine,” Ward says. “The work brings metalloprotein design and evolution into the next league—to a ball park that should interest industry.”

James P. Collman (October 11, 2016 5:14 PM)
This is an important opening chapter in "molecular biology". This spectacular research is the harbinger of many things to come.
Reply »