by Katherine Bourzac, special to C&EN 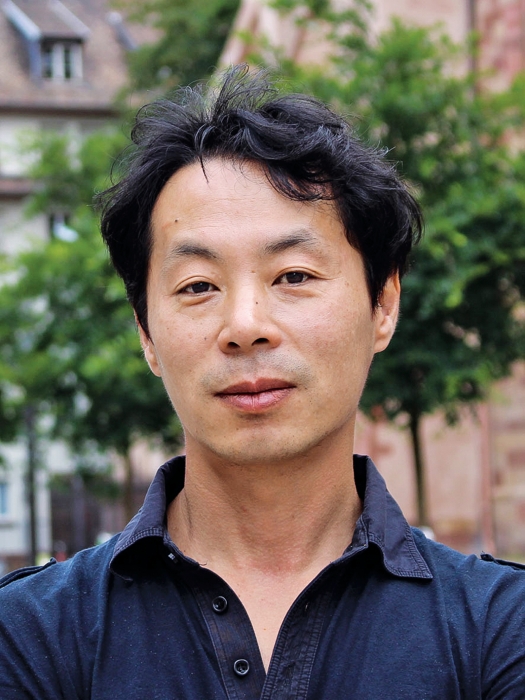 Insung Choi, a professor at Korea Advanced Institute of Science & Technology (KAIST), is a chemist who has accidentally become something of a cell biologist. Playing around with the chemistry of silica a few years ago, he found he could coat yeast and mammalian cells in the material, giving them an artificial cell wall that protects the cells from stress. These coated cells mimic bacterial endospores, a dormant cell type that can withstand extreme conditions. Silica-coated cells could sit out on a shelf instead of in incubators or be used in durable chemical and medical sensors. The shells might even one day cloak the antigens found on red blood cells and other cell lines, potentially making it possible to give, for example, type A-positive blood to a person who is B-negative. On the cusp of testing the coated particles in animals, Choi sat down with Katherine Bourzac in his office in Daejeon, South Korea, to talk about his cell-in-shell hybrids and why he thinks they each resemble a tiny version of the superhero Iron Man.

How did you come up with the idea of encapsulating cells?

I started from simple scientific curiosity. I’m interested in controlling the interface between man-made synthetic materials and biological entities. Using chemical approaches to control bio-nano interfaces, we can manipulate living cells like we manipulate molecules.

I was working on bioinspired chemical strategies for making silica or other biominerals found in nature. One example is ­diatoms: water-dwelling, single-celled algae. Diatoms have silica, not organic, cell walls. We wanted to mimic the biological processes of silica formation by using synthetic counterparts to the biological catalysts that form the silica cell walls, to chemically control the synthesis of biominerals in the laboratory under very mild conditions. We found polymers that catalyzed the silica polycondensation on solid substrates, forming uniform silica films.

Then I thought, why not make silica walls for other types of cells that do not have them? So we tried it with yeast cells as a living substrate. And then the encapsulated cell was alive! While we were doing the research on this simple chemical approach to forming artificial shells, we saw we could use the shells to control metabolic activities and other processes in the cell, causing them to slow down or go dormant without dying. I thought, wow, this really might be a big deal.

I call these structures micrometric Iron Men: Just as the fancy suit is empty without Tony Stark, what’s important is the cell, not the shell.

Does this approach have any precedent in nature?

When certain types of bacteria experience nutrient deprivation or other stress, they go dormant and produce a protective coating. I looked at this, and, well, what we are making are really mimics of bacterial endospores. The spores’ structure is really tough. They survive for years under harsh conditions. What we are doing is making the artificial sporelike structure chemically. So I named these newly coated cells “artificial spores.”

What are some potential applications of cells in shells?

I’m interested in T-cell therapy for cancer. When a doctor takes T cells from a patient’s body for later reinjection, they have to be manipulated in the lab. In that process, the cells die easily. We hope to increase their viability by encapsulating them. It’s really difficult because immune cells are very labile to chemical treatment. A simpler application is a blood-type-free blood transfusion. The shell blocks the antigen on the red blood cell, solving the problem of blood-type mismatching. We recently sent samples for testing in animals.

In another application, the cells are ­sensors. When I was a postdoc at MIT, I read a newspaper article about researchers using B cells to detect anthrax. In the lab, B cells can detect one single anthrax spore and amplify the signal using their natural amplification pathways. But in the real world, you have to take them to the ­battlefield. You have to store that cell-based sensor for some time—say, one year—and keep it viable. Encapsulation might work.

What can pass through the shell, and what is blocked out?

It would depend upon what kind of materials we are using for cell encapsulation. Basically, we want to control the pore sizes of materials for our shells. The pore size is about 5 nm or smaller, so gases, nutrients, and small molecules can penetrate to maintain cell viability. Bigger entities, such as macrophages or big enzymatic complexes, cannot penetrate.

One of the problems is that to increase the viability of the cells inside, we have to make really compact, strong shells. But ultimately, we have to break up the shells so we can go on to use the cells inside. We found some materials, including polyphenols, that we can form onto individual cells, then break up or degrade under mild conditions. I call these structures micrometric Iron Men: Just as the fancy suit is empty without Tony Stark, what’s important is the cell, not the shell.

You seem to follow your whimsy. How do you stay open to new ideas?

Inspiration and ideas come not just from reading chemistry research papers but books, even comic books. Chemistry is really interdisciplinary; it needs some help from other disciplines.

One of my faculty members says that I’m not a chemist: “What you’re doing is not chemistry—you’re doing science.” But chemistry is a core, connected to a lot of other things. It has its own identity, but it can go here and here and here.

Katherine Bourzac is a freelance writer. This interview first appeared in ACS Central Science: cenm.ag/choi. It has been edited for length and clarity.