Ethane supplier to the world

Chemical makers on three continents are set to tap into cheap feedstock from the U.S. 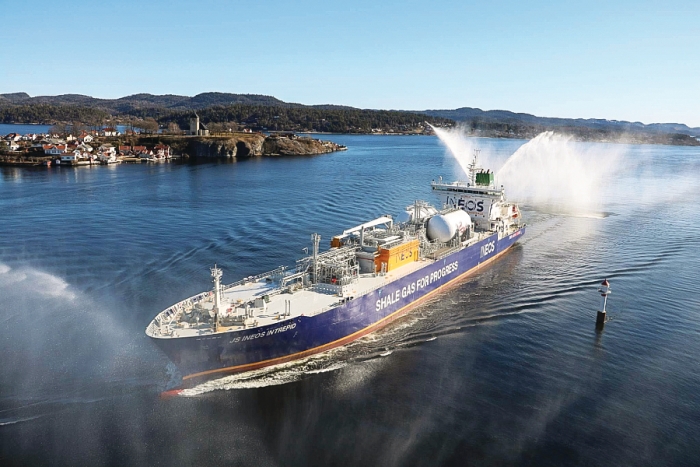 Credit: Ineos
The Ineos Intrepid has been shipping ethane from Texas and Pennsylvania to Europe.

Where are they? You can track the ethane carriers Ineos Intrepid and Navigator Aurora—orany other vessel in the world that has its transponder on—at marinetraffic.com.

European chemical makers Ineos and Borealis have already christened ships that will carry ethane from the U.S. to their ethylene crackers in Europe. India’s Reliance Industries is taking delivery on a fleet of six so-called very large ethane carriers, which will be the biggest ships of their kind in the world, each with nearly 90,000 m3 of storage capacity.

The shale revolution has driven down U.S. natural gas prices. Today, on an energy content basis, natural gas is only one-third the price of oil. And a lot more ethane is being produced than the current stable of U.S. ethylene crackers can consume. Most of the excess is being left in natural gas and burned as fuel.

The U.S. chemical industry has about a dozen ethylene projects in the works to gobble up a good chunk of the excess ethane. Foreign chemical makers want the rest. 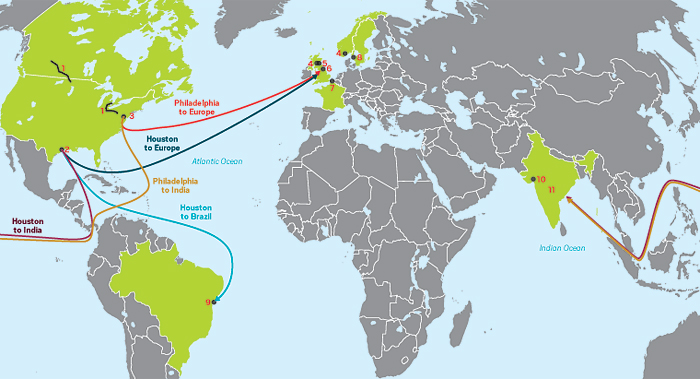 PIPELINE EXPORTS TO CANADA
1: Joffre, Alberta; and Sarnia, Ontario
Nova Chemicals has been importing ethane from the U.S. for three years. The Vantage pipeline has the capacity to bring up more than 900,000 metric tons per year from North Dakota to a Nova facility in Alberta. Sunoco Logistics’ Mariner West pipeline will eventually deliver about 300,000 metric tons of Marcellus Shale ethane from Pennsylvania to Ontario.

EXPORT TERMINALS
2: Morgan’s Point, Texas, near Houston
Enterprise Products Partners said bon voyage in September to the first ship leaving its new export terminal for customer Ineos. The Houston Ship Channel facility has the capacity to load 11,000 metric tons of ethane per day.
3: Marcus Hook, Pa., near Philadelphia
Sunoco Logistics’ terminal near Philadelphia made its first delivery in March. It has the capacity to load about 2,000 metric tons per day of ethane originating from shale gas in western Pennsylvania.

ETHANE IMPORTERS
4: Grangemouth, Scotland; and Rafnes, Norway
Ineos’s ambitious plan is to import about 800,000 metric tons per year of ethane from Houston and Philadelphia for two of its European crackers. The company has already taken delivery on four of eight 180-meter-long Dragon-class carriers. Together, they will form what the firm calls a virtual pipeline across the Atlantic, making eight deliveries per month by 2020.
5: Mossmorran, Scotland
ExxonMobil has agreed to purchase imported ethane from Ineos for use at the Fife Ethylene Plant it shares with Shell. Deliveries are set to commence next year.
6: Teesside, England
Saudi Basic Industries Corp. (SABIC) will soon begin receiving deliveries of U.S. ethane at its English cracker, which has been upgraded to accept the new feedstock. The shipments will reportedly originate from Enterprise in Texas.
7: Dunkirk, France
Versalis began work to allow its French ethylene cracker to consume U.S. ethane. However, citing low oil prices, the company has put the program on hold.
8: Stenungsund, Sweden
Borealis has chartered the Navigator Aurora, a 180-meter ethane carrier built at the Jiangnan Shipyard in Shanghai. The European chemical maker plans on receiving 240,000 metric tons of ethane annually from the Philadelphia terminal.
9: Camaçari, Brazil
Braskem is spending $120 million to convert some of the feedstock of its largest Brazilian cracker from naphtha to ethane. Enterprise, in Houston, will supply roughly 200,000 metric tons of ethane annually starting next year.
10: Dahej, India
Reliance Industries may have the most ambitious ethane plan. It intends to import, beginning later this year, 1.5 million metric tons annually from the U.S. for consumption at three ethylene crackers near its Dahej terminal.
11: India
Gail and Hindustan Petroleum plan to build an ethylene cracker in India that will consume 1.3 million metric tons per year of U.S. ethane. Gail solicited ethane contracts earlier this year.

Comments
Randy (November 7, 2016 3:41 PM)
Send an email to hcosite@bellsouth.net for a flow diagram of US ethylene producers. Lots of expansion planned...
Reply »