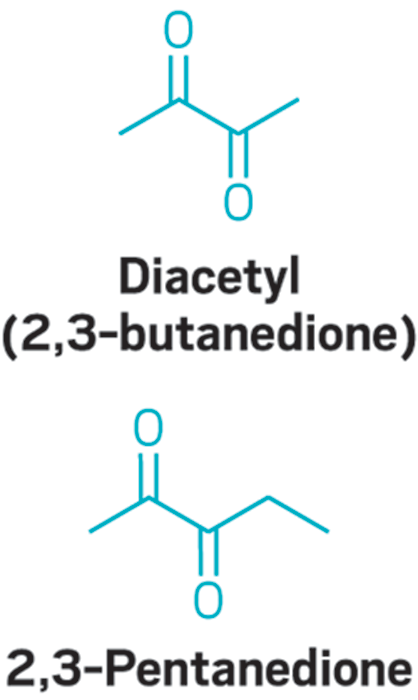 Workers in the chemical and food industries should limit their exposures to the food flavoring chemicals diacetyl and 2,3-pentanedione to avoid irreversible lung damage, the National Institute for Occupational Safety & Health (NIOSH) recommended last week. Diacetyl was once widely used to give microwave popcorn a buttery flavor until factory workers exposed to the chemical reported in the early 2000s that they had developed serious respiratory disorders. In some cases, 2,3-pentanedione—a chemical that is structurally similar to diacetyl—has been used as a substitute, despite its potential to cause the same problems. NIOSH recommends keeping exposures below 5 parts per billion for diacetyl and below 9.3 ppb for 2,3-pentanedione during an average 40-hour work week. Short-term exposures should be no more than 25 ppb for diacetyl and 31 ppb for 2,3-pentanedione over a 15-minute period, NIOSH suggests. “We know these flavoring compounds can pose a great risk for workers who may be exposed on the job, causing serious and irreversible damage to their lungs,” says NIOSH Director John Howard.