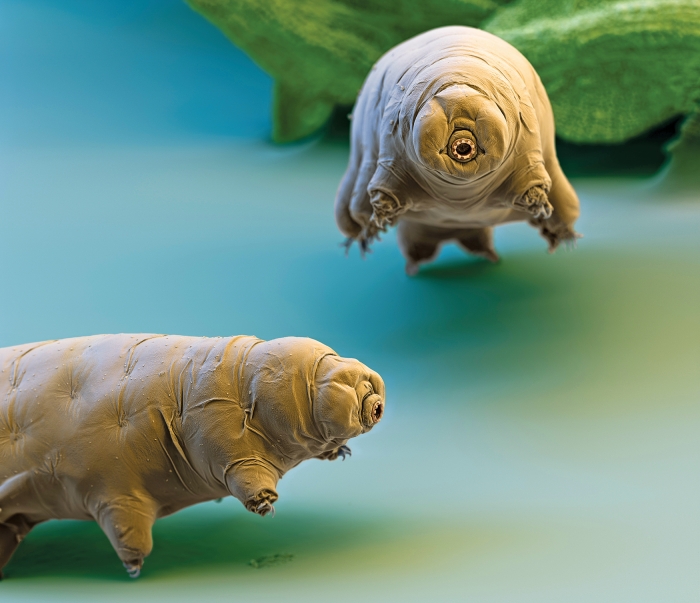 Credit: Eye of Science/Science Source
These two tardigrades (Paramacrobiotus fairbanki), seen in a color-enhanced scanning electron micrograph, were collected in a moss sample from Alaska.

Tardigrades are a mystery. Unlike most animals, these eight-legged microscopic critters occupy a position on the tree of life that’s open to debate: They straddle the divide between arthropods and nematodes. They’ve been found just about everywhere scientists have looked, from mountaintops to ocean trenches. Researchers recently recovered a moss sample from Antarctica that was stored in a freezer for more than 30 years. They revived two tardigrades found in that sample and watched as the organisms began reproducing—repeatedly (Cryobiology 2016, DOI: 10.1016/j.cryobiol.2015.12.003).

In 1773, German zoologist Johann August Ephraim Goeze first named the animals “kleiner Wasserbär,” or little water bear, based on their ursine appearance. Ever since, research into tardigrades has remained a product of biological curiosity, with the vast majority of work focused on their taxonomy. Researchers predict that the 1,200 species identified thus far represent only a fraction of their diversity. “Each time you collect in an area, the chance that you find a new species is very high,” says Roberto Guidetti, a tardigrade zoologist at the University of Modena & Reggio Emilia.

Undiscovered diversity aside, tardigrades’ true charm—and charm is the word scientists use—lies in their incredible resilience. Scientists have subjected tardigrades to extreme conditions, such as temperatures near absolute zero, crushing pressures, radiation levels that should easily kill them, and even the vacuum of space, and the water bears don’t seem to care. But the tiny creatures aren’t easily giving away the secrets of how they survive such torment.

A string of recent publications on tardigrade genomes may soon change that. The work is already yielding insights into a few tricks that tardigrades employ to survive harsh conditions. Those findings have inspired speculative news stories suggesting science-fiction-like applications, such as engineering people and animals with tardigrade genes to withstand radiation-heavy space travel. Farfetched headlines aside, many tardigrade researchers think that basic research on the critters’ genes and proteins could lead to real medical applications.

“It is only in recent years that molecular studies have been done on this topic, mainly due to the difficulty of working with these very tiny animals,” Guidetti says.

Takekazu Kunieda, a molecular biologist at the University of Tokyo, is the leader behind the most recently published tardigrade genome. Kunieda began studying tardigrades in 2005 after reading about how they undergo cryptobiosis, a process in which they slow their metabolic activity to undetectable levels in extreme conditions such as freezing temperatures or drought.

Although commonly found in moss and lichens, tardigrades are truly aquatic animals, requiring a film of water surrounding their body to take in oxygen and expel carbon dioxide. Without water, they dry out, practically cease metabolism, and curl up into a sturdy desiccated form called a tun. It is the tun state that enables tardigrades to withstand many extremes. And then if they return to water, they bounce right back.

To uncover how tardigrades perform this feat and others, Kunieda and his colleague Daiki D. Horikawa set off to find a particularly resilient species to study as a model organism. Many researchers say that molecular studies on tardigrades languished for decades because the critters were difficult to rear in large numbers in the lab. But Kunieda and Horikawa found that feeding the super-radiation-resistant species Ramazzottius varieornatus a steady diet of green algae did the trick. Next, the duo and their research teams began sequencing the genome of R. varieornatus, a project they started in 2008 but only published this September (Nat. Commun. 2016, DOI: 10.1038/ncomms12808).

By that time, two other research groups had beaten Kunieda to the punch. In 2015, researchers from the University of North Carolina, Chapel Hill, published a draft genome of a different tardigrade species, Hypsibius dujardini, with the shocking revelation that one-sixth of its genes were acquired through horizontal gene transfer, a phenomenon in which different species exchange genes (Proc. Natl. Acad. Sci. USA 2015, DOI: 10.1073/pnas.1510461112). Although common in bacteria, gene transfer at this scale in animals was unprecedented, leading to suggestions that tardigrades assimilated their survival skills from bacteria, plants, fungi, and archaea.

But Kunieda doubted those results. His teammates had experienced problems with bacteria contaminating their tardigrade samples. “So we were very suspicious,” he says. It wasn’t long before another group from the University of Edinburgh published their own genome of H. dujardini that showed that horizontal gene transfer accounted for only 1–2% of genes in the tardigrade (Proc. Natl. Acad. Sci. USA 2016, DOI: 10.1073/pnas.1600338113). The R. varieornatus genome recently published by Kunieda and colleagues also contained only a small number of genes, about 1%, derived from horizontal gene transfer.

After sequencing the R. varieornatus genome, Kunieda’s team started to investigate genes unique to the tardigrade. One such gene coded for a protein called damage suppressor protein, or Dsup. The protein appears to hang out with DNA in the nucleus of cells, and its sequence predicts that it contains a highly basic α-helix that could interact with DNA. Thinking that Dsup may play a role in protecting tardigrade DNA from damage, the team engineered cultured human embryonic kidney cells to express the Dsup gene and found that the cells had higher survival rates when exposed to X-rays compared with nonengineered cells. In particular, the cells had 40% less X-ray-induced DNA damage.

“Tardigrade research is in its infancy compared with all the other model organisms,” says Jenny Tenlen, who studies tardigrades at Seattle Pacific University. “The discovery that tardigrade DNA is protected from radiation has made people very excited about long-term applications for what this could mean for humans,” she says.

The publication describing the radioprotective Dsup protein spurred speculations in news coverage that humans could be engineered with Dsup to protect themselves from radiation during space travel. But Kunieda describes such claims as “almost science fiction.” He says Dsup alone is not sufficient to protect humans or animals.

They’ve got some secrets that will add great value to us as human beings.
Carl Johansson, tardigrade researcher, Fresno City College

Besides finding Dsup, Kunieda’s team also discovered two groups of highly expressed genes unique to tardigrades. They code for cytoplasmic-abundant heat-soluble (CAHS) and secretory-abundant heat-soluble (SAHS) proteins, which appear to be similar in function to another family of proteins that many plants and animals use to tolerate dry conditions.

These dry-tolerant proteins are intrinsically disordered in water but develop secondary structures in the dehydrated state that allow them to stabilize DNA, proteins, and cell membranes. Horikawa would like to study tardigrades’ CAHS and SAHS proteins in hopes of developing ways to preserve organs or tissues in a dry state, possibly for transplantation procedures.

Steven Hand, who studies dry-tolerant proteins at Louisiana State University, says that research on CAHS and SAHS proteins is interesting but that “there are many, many steps down the road” before human applications can be realized. Hand also points out that other researchers are already studying desiccation-tolerant animals with similar goals in mind.

One of those researchers is John Crowe, a professor emeritus at the University of California, Davis. Crowe became fascinated with tardigrades at the age of 15 at a National Science Foundation-funded science summer boot camp for high school students. He went on to study tardigrades’ abilities to live without water and found that the disaccharide trehalose helps stabilize their cells upon desiccation. But he was never able to get enough tardigrades to study the chemistry behind the phenomenon, Crowe says, so in the early 1970s, he switched over to studying nematodes, which have similar abilities.

Crowe has been asked many times if this work could lead to wild applications, such as freeze-drying humans for long-term space travel. “That won’t happen,” he laughs. But a method he developed 15 years ago to freeze-dry platelets with trehalose is currently undergoing clinical trials. Doctors give platelets to patients to help stop massive bleeding. Platelets normally have a shelf life of three to five days in a blood bank, but Crowe developed a technique to get trehalose inside the platelets so that they can be freeze-dried with a shelf life of about five years. The Army has expressed interest in the technique, Crowe says. The Army envisions every soldier being able to carry a packet of their own just-add-water platelets for use in the field.

But scientists have since discovered that trehalose can’t fully explain desiccation tolerance in tardigrades, and some species don’t appear to use it at all, so studying the CAHS and SAHS proteins could yield new and unexpected insights into freeze-dry applications.

Crowe is excited by the developments in tardigrade research. He thinks that the techniques developed by the Japanese groups to raise tardigrades in large numbers should spur new discoveries. “So far as I know, nobody has set out to use tardigrades to uncover commercial/medical applications. These charming little animals have been the subject of curiosity-driven research, with no applications in mind,” Crowe says. But that will likely be changing soon.

“I wish I were starting out again right now,” he says.

Carl Johansson, a tardigrade researcher from Fresno City College, credits the Japanese researchers for reigniting interest in studying the molecular mechanisms of tardigrade resilience. “Those guys really poured gasoline on the fire because they opened a whole lot of people’s eyes to the immense medical applications of researching tardigrades,” he says.

Three different organizations interested in CRISPR gene-editing experiments have recently contacted Johansson for his tardigrade expertise. There is a conceptual interest in transferring tardigrades’ abilities to withstand extreme conditions, such as desiccation, into other organisms, he says. “They are under the misguided notion that all you’ve got to do is flip the gene for trehalose into [other species] and all of the sudden they’ve got this magic organism,” he adds.

Still, Johansson and many other tardigrade fans hope to see new researchers tackle the many long-standing questions about the animal. “We’ve got a lot to learn about these guys, and they’ve got some secrets that will add great value to us as human beings,” he says, “but it is going to take some work for us to interrogate them and find those secrets.”