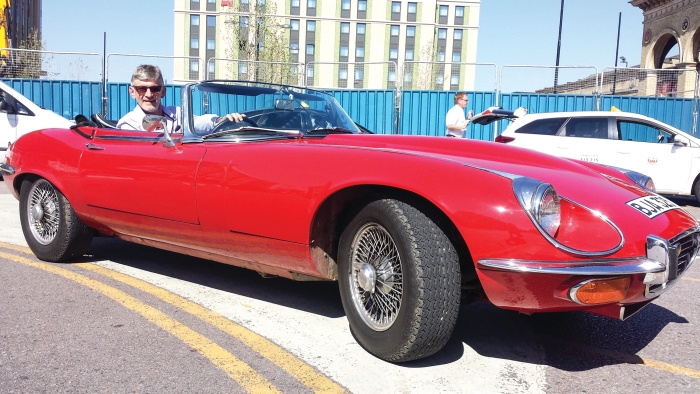 Credit: Alex Scott/C&EN
Engineering enthusiast Carson takes his Jaguar for a spin around the streets of Cambridge.

Neil A. P. Carson, who retired in 2014 after 10 years as head of the precious-metals and catalysts firm Johnson Matthey, has a passion for engineering and science. And it surfaces readily. As he steers his vintage Jaguar E-Type gently through the bicycle-filled streets of his hometown of Cambridge, England, he enthuses about the car’s iconic design, its four carburetors, the bubbling 12-cylinder engine, its insufficient drum brakes (should he happen to hit the car’s top speed of around 240 km per hour), and its evocative smell of oil and leather.

Though the Jaguar is a recent acquisition, Carson’s passion for chemistry and engineering has been lifelong and impactful in the U.K. He was recently recognized by the queen of England for services to the chemical industry.

Carson, 59, brought his interest in materials and engineering to bear with great effect during his 34 years at Matthey, where he started out directly from university as an engineer in the company’s trainee program. By the time he left, he had helped transform Matthey from a precious-metals processor into a global catalysts and chemicals provider—and more recently, into a battery materials producer.

Carson stepped up the firm’s investment in battery materials in 2012. Robert MacLeod, who succeeded Carson as chief executive officer, predicted recently that the battery business is set to turn its first annual profit at the end of this year.

Fashionable stubble, a vintage car, and a relaxed demeanor could give the impression that Carson is a man who has taken his foot off the pedal. But in the two years since retiring from Matthey, he doesn’t appear to have slowed down. He is honorary president of the U.K.’s Society of Chemical Industry; he has been cochair of the Chemistry Growth Partnership, an industry-government initiative to promote the U.K. chemical industry; and he is chairman of TT Electronics, a producer of automotive and aerospace sensors.

Carson is also the nonexecutive director of both the engineering firm Amec Foster Wheeler and the retail services firm PayPoint. He is even a part-time shepherd with a flock of more than 20 sheep that he keeps in a field next to his house.

Carson will be putting his business and shepherding activities aside in the coming days when he will make his way to Buckingham Palace, the queen’s official London residence, where he will be made an Officer of the Order of the British Empire, or OBE.

He is humbled by the award and welcomes it. But he also recognizes the quirkiness of it all, which has much to do with English pomp, ceremony, and tradition. “As an OBE, my children will be permitted to marry in [London’s] St. Paul’s Cathedral,” he says with a laugh.

A year short of its 200th anniversary, Matthey has considerable history that started with gold refining. The company is recognized today as a global leader in catalysts and chemicals for a wide range of applications. It has annual sales of $15.4 billion, up from about $5.6 billion when Carson took up the role of CEO.

When Carson joined Matthey as a graduate trainee in 1980, the firm was considered an engineering company. That changed thanks largely to a bet placed in the early 1990s on a suite of auto emissions control catalysts, including those for diesel cars. “There were some days in the late ’70s when you couldn’t go outside in California because of poor air quality caused by cars,” Carson says.

Sales at the start were slow. “There were plenty of times when we thought about shutting the business down,” he acknowledges. Ultimately, though, with Carson as head of its auto catalysts business, Matthey kept the faith. Tough new emissions regulations were introduced in the mid-2000s in Europe and the U.S., and car companies turned to the firm for solutions.

“We took more than two-thirds of the market from the get-go,” Carson recalls. Today, the firm’s annual sales of emissions control technologies, including auto catalysts, top $2.7 billion.

Carson also has championed fuel-cell technology for almost 20 years. “This is one bet that hasn’t paid off ... yet!” he says. Matthey has put tens of millions of dollars into making components—mainly platinum catalysts—for cells that generate electricity from hydrogen.

“If fuel cells took 1% of the global automotive market, then we would have a really decent business,” Carson says. But battery technology looks to be the clean technology winner in the near term, he concedes.

One point he is unwilling to concede, though, is that Britain’s impending exit—or Brexit—from the European Union will have any impact on Matthey. Although many U.K. chemical companies are concerned about the uncertainties ahead, the lion’s share of Matthey’s sales come from outside the U.K., and this will insulate the firm from potential Brexit-related costs, Carson says. Matthey’s share price didn’t waver the day after the Brexit vote, he notes.

While he chaired the Chemistry Growth Partnership, Carson worked with other chief executives to develop a joint industry-government position on a range of issues, including oil and gas production via hydraulic fracturing, or fracking. This has laid the foundation for the government’s pro-fracking strategy. Widespread fracking is set to commence in the U.K. within the next year or so.

He also played a role in securing U.K. government backing for a national chemical formulation center. Within the past year, the planned facility has secured $35 million in government funding—enough to build it and operate it for the next five years. The aim of the center is to bring together formulation expertise from universities, research organizations, and businesses to help companies develop, prototype, and scale up the next generation of formulated products and processes.

Carson has already proven he is effective at what he describes as the “lonely job” of running a multi-billion-dollar chemical company. In his nonexecutive roles, he now enjoys passing on his knowledge to managers at technology and engineering firms. As Neil Carson, OBE, he also has every intention of continuing to enjoy the nuts and bolts of engineering. That includes testing out the ones in his Jaguar.

Business
Seifi Ghasemi recounts his path to the helm of Air Products
Business
Ineos advances plans for off-road car
Environment
Start your engines
Share X
To send an e-mail to multiple recipients, separate e-mail addresses with a comma, semicolon, or both.
Title: C&EN talks with Neil Carson, British chemistry champion
Author: Alex Scott
Chemical & Engineering News will not share your email address with any other person or company.