Earlier this month, the Waltham, Mass.-based start-up inked an agreement to sell its Converge polyols business, which makes polyols out of propylene oxide and carbon dioxide, to Saudi Aramco for $75 million, plus another $25 million or more in potential royalties.

Other start-ups might divide up the payout and pack it in. Novomer, though, intends to plow the money into another, even more ambitious, initiative: making high-volume chemicals, including acrylic acid, from carbon monoxide and ethylene oxide. 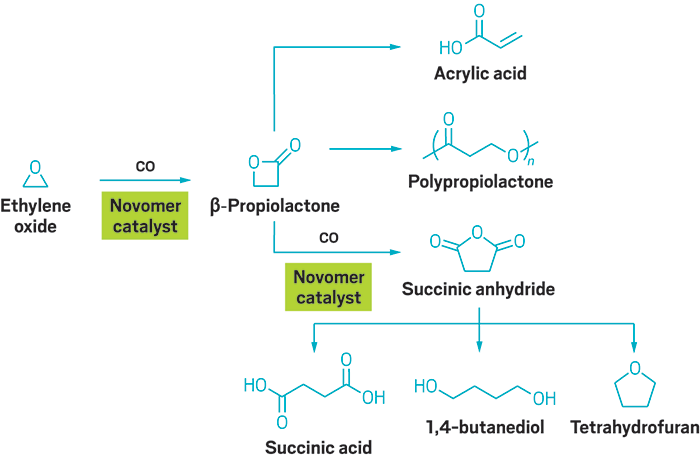 Novomer aims to establish β-propio­lactone as an intermediate to make important chemicals such as acrylic acid.

Novomer traces its origins to the lab of Geoffrey W. Coates, a professor of chemistry at Cornell University. Back in 2004, Coates and a graduate student, Scott Allen, hit upon the idea of forming a start-up while the two were discussing what Allen would do when he completed his Ph.D. The two tapped the business pro Tony Eisenhut, managing director of intellectual property commercialization firm KensaGroup, whom Coates had advised in the past. Allen left Novomer for Aramco last month.

Novomer went on to develop chemistry to react epoxides with CO2, which Coates’s group had demonstrated with catalysts such as β-diiminate zinc acetate and salen cobalt carboxylate complexes.

An early focus for the new firm was a polypropylene carbonate polymer that can depolymerize at the relatively low temperature of 180 °C. The company had in mind applications, such as photolithography for electronic circuits, where the polymer would be needed only temporarily.

Around 2010, the company switched gears to making polycarbonate polyols from propylene oxide and CO2. Conventional polyether polyols mainly use propylene oxide alone. Both are reacted with diisocyanates to make polyurethanes.

Jim Mahoney, Novomer’s chief executive officer, points to a few advantages of his firm’s polyols. They have the greenhouse gas sequestration benefit of incorporating 43% by weight CO2, which also happens to be a cheap raw material.

According to Mahoney, the polyols are stronger than their conventional counterparts, allowing for lighter-weight polyurethane foams. In addition, because the carbon in the foams is partially oxidized, they burn at a lower temperature and give off less smoke in the event of fire. “It made a lot of sense to push the polyols first,” he says.

Novomer isn’t alone in this approach. Covestro has built a plant in Dormagen, Germany, to make polyols from CO2. Coates notes, however, that Covestro’s polyol doesn’t incorporate as much CO2 in its backbone as Novomer’s does.

Novomer is already lining up customers. In May, Ford Motor Co. announced that it aims to adopt the polyols in seat cushions and other applications within five years.

And of course, the polyols attracted the interest of Saudi Aramco, which first invested in Novomer in 2013. Aramco says the purchase of the business aligns with Saudi Arabia’s Vision 2030 program, which aims to make Aramco a pillar for modernizing the kingdom’s petroleum-dependent economy.

Custom chemical maker Centauri Technologies of Pasadena, Texas, has been making commercial quantities of the polyols for about two years. Novomer already has design plans for a world-scale plant, which Aramco will build in Saudi Arabia. A site hasn’t been picked yet, but two of Aramco’s joint ventures—PetroRabigh, with Sumitomo Chemical, and Sadara, with Dow Chemical—already make propylene oxide.

William L. Tittle, a principal at the consulting group Nexant, says the Novomer technology is “basically sound” and sees it as a long-term investment for Aramco. “The prospect of this technology is not that it is a breakthrough technology,” he says. “It is that if a carbon tax comes into effect, this technology would be of more interest.”

It’s rare enough that a start-up makes good with a new petrochemical technology, but Novomer thinks it can do it again. The firm will use Aramco’s $100 million to nurture a carbonylation process it is developing.

In it, a homogeneous catalyst reacts CO with ethylene oxide to form β-propiolactone, which polymerizes into polypropiolactone. At high temperatures, the polymer breaks down into acrylic acid, a raw material for superabsorbent polymers.

Novomer has been piloting its process for two years. “We feel pretty confident in that technology,” Mahoney says.

He’s so confident that he is already planning an acrylic acid plant to open in 2019. It will be large—160,000 metric tons per year—and located in Europe. Mahoney intends to use ethylene oxide made from ethanol and CO derived from natural gas or, perhaps, gasified agricultural waste.

Longer term, the company plans to explore other applications for propiolactone. High-molecular-weight polypropiolactone has strong barrier properties and is biodegradable, a potent combination for packaging. Propiolactone can also be converted into succinic anhydride, which can be used to make butanediol and tetrahydrofuran.

Mahoney also dreams of a U.S. propiolactone plant and, in three years, an initial public offering.

Coates, for his part, remains humble, even though the company he cofounded has real success behind it and prospects for more ahead. “I’m really excited our chemistry is being used,” he says.