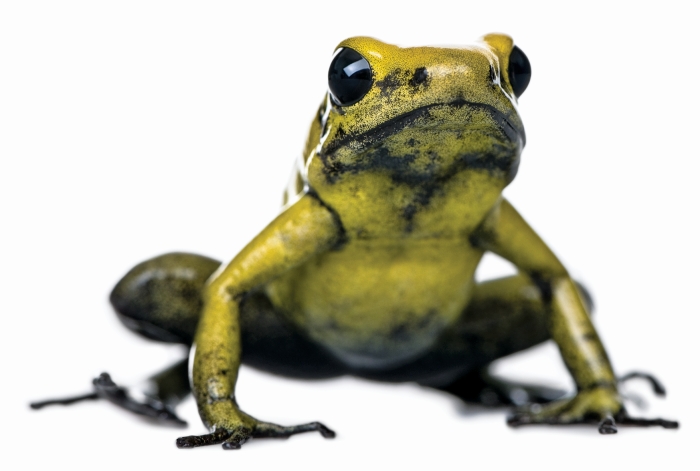 Brightly colored frogs from the Phyllobates genus hop about the Colombian rain forest without fear of being gobbled up by predators, thanks to (-)-batrachotoxin, a potent steroidal toxin in their skin. Natives of the region capture the frogs to use this toxin on the tips of blowdarts, giving the amphibians their more common name: poison dart frogs.

Toxic to the heart and nervous system, (-)-batrachotoxin is an agonist that forces open voltage-gated sodium ion channels. This property also makes the compound a useful biochemical tool for studying these channels, which are important for cardiac health and pain perception. But as Phyllobates frogs have become endangered, supplies of (-)-batrachotoxin have become scarce. Now, chemists at Stanford University report at 24-step asymmetric synthesis of (-)-batrachotoxin, giving researchers an opportunity to generate the molecule as well as novel analogs, which could be used as biological probes and, possibly, even as drugs (Science 2016, DOI: 10.1126/science.aag2981).

A key step in the Du Bois lab’s 24-step synthesis of batrachotoxin is a radical cascade.

“Batrachotoxin is a unique chemical agent that affects channel function in a multitude of ways, and we don’t really have a great sense of how it does this at a molecular level,” says Justin Du Bois, who led the research effort that included Matthew M. Logan, Tatsuya Toma, and Rhiannon Thomas-Tran. “We’d like to be more intelligent in terms of how we design molecules that can modulate channel function,” he says, explaining that instead of simply turning the channel on, as (-)-batrachotoxin does, it would be great if one could find molecules that could tune channel function like a dimmer switch.

The synthesis developed by Du Bois’s group features a radical cascade that knits together the fused ring system. At just 24 steps, it’s quite a bit shorter than previous syntheses that took more than 40 steps. It also offers opportunities to strategically add substituents to the molecule.

Having come up with a synthesis of (-)-batrachotoxin from fairly simple building blocks, Du Bois’s group decided to also make the mirror image of the compound: (+)-batrachotoxin. To the researchers’ surprise, they discovered that although this unnatural isomer binds in the same place as the natural toxin, it has a completely different effect: It acts as an antagonist, blocking the sodium channel.

“This is a great example of how chemical synthesis can enable biological studies that would be difficult—and in the case of the unnatural isomer, impossible—to conduct with material from the natural source,” says Sarah Reisman, an expert in synthesizing natural products at Caltech.

William Catterall, an ion channel expert at the University of Washington, says the new synthesis work from Du Bois’s group “opens up outstanding opportunities to probe the voltage-dependent gating processes of sodium channels with a powerful set of new reagents and potentially to develop new sodium channel inhibitory drugs for use in therapy of cardiac arrhythmia, epilepsy, and chronic pain.”