Among the city’s growing pains, housing costs are rising and laboratory space is becoming tight 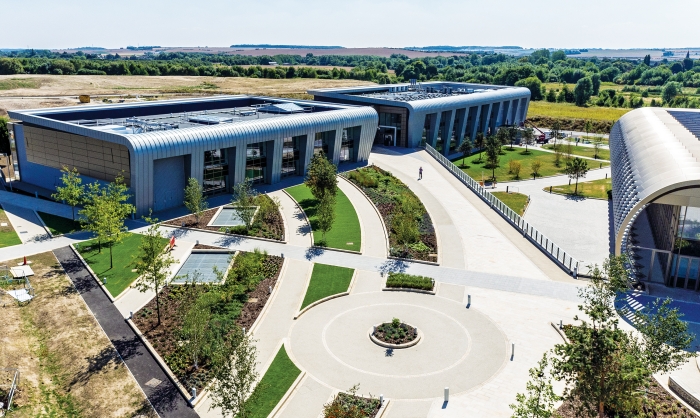 The 3:47 train labors past skyline cranes and construction scaffolding as it moves out of Cambridge bound for London. Conversation in one car strikes up and turns to the issue of Cambridge’s lack of affordable housing. “I’ve got lots of friends—mostly postdocs—who often talk about how they can’t afford to rent a place,” says University of Cambridge Ph.D. student Emily Fisher.

Cambridge, England, by the numbers

1/10 of the venture capital investment of San Francisco

100% increase in homelessness in past year

Originally from North East England, Fisher has a research position in radiochemistry. “It was difficult to turn it down. It’s the project I want to do,” she says. But renting a two-bedroom apartment in the city center can cost about $1,250 per month, chewing up nearly all of her monthly stipend of $1,550, she says.

Oliver Craig, a professor of archaeological science at York University, chimes in on the conversation. “We have a five-bedroom house with a garden where I am, outside York. I couldn’t afford that in Cambridge,” he says. The disadvantages would outweigh any benefits of taking up a role in the city, he adds.

As Cambridge’s biotech hub grows, problems such as high rent, scarce lab space, traffic congestion, and even homelessness are emerging. The decision by the drug giant AstraZeneca to move thousands of staffers into the city has only added to the problem. Still, operators of science campuses in the city say they are confident that Cambridge can handle the changes and that biotech there will continue to expand.

In the past five years, the number of companies in Cambridge has increased about 30% to roughly 400. Partly as a result, the average price for a house in the city has increased 36% to $600,000 since 2013, according to the property website Rightmove. Apartment prices have risen 5% in the past year and now average $400,000.

One of my frustrations is that we are in danger of suggesting that Cambridge doesn’t want to grow—which I don’t think is the case.
Derek Jones, CEO, Babraham Research Campus

The city’s biotech cluster is still an order of magnitude smaller than those in San Francisco and Massachusetts. Biotech companies in those U.S. locations might raise $500 million over the course of their fund-raising efforts, but in Cambridge, the figure is closer to $50 million, observes Adrian Ibrahim, head of business development for the Wellcome Trust Sanger Institute.

“Part of the difference is down to maturity,” Ibrahim says. “Unlike in the U.K., the U.S. has plenty of scientists on their third or fourth venture.” The scale of venture capital in the U.S. is also much greater, he adds.

As Cambridge grows, it is confronting issues already faced by its U.S. counterparts. “Cambridge is not really geared up to provide a lot of affordable housing. People are understandably very sensitive about losing greenbelt land,” says Derek Jones, chief executive officer of Babraham Research Campus (BRC), one of several research parks in and around Cambridge.

BRC’s tenants—a mix of start-ups and more mature biotechs—don’t currently have a problem securing postdocs or senior staffers, who remain attracted to Cambridge, Jones says. But recruiting technical assistants and administrators can be a challenge, he concedes.

And competition for housing in Cambridge and the surrounding villages is rising. About 730 new properties were built in the city in 2015, according to the real estate data firm Hometrack. But in the past year or so, AstraZeneca alone has relocated more than 2,000 staffers to Cambridge from northern England. They are in temporary quarters around the city waiting for the opening of the firm’s new administrative and R&D headquarters in CBC two years from now.

Of the several science parks in and around the city, CBC is arguably growing the fastest. In addition to AstraZeneca, smaller firms are moving in, and a second hospital is being built on the site. The chance to work with clinicians, Astra­Zeneca, and biotech firms could draw more companies into the area.

Other top-tier attractions within the Cambridge biotech cluster include the Wellcome Trust Sanger Institute and the European Bioinformatics Institute. Both are located on the Wellcome Genome Campus about 21 km south of the city center.

The two institutes are paving the way for future medicines via the development of genomics know-how. In recent days, the genome campus opened new buildings for gene sequencing and data handling. Even before this latest $50 million investment, the campus was a global destination for big pharma and biotech start-ups alike. Over the next year or so, it plans to bring in about 20 start-ups that can contribute to the development of science on the site.

Additional biotech buildings are planned or are already springing up in and around Cambridge. Big pharma companies and small biotech firms are jostling for suitable lab and office space in the science parks or the city itself. Science park realtors, it seems, just have to put on the kettle and wait for the phone to ring.

The Cambridge Science Park (CSP) to the north of the city is pretty much 100% leased, says Will Heigham, a property agent with the realtor Bidwells. He points to one building that came under offer literally five minutes after the existing tenant had left. “The old tenants said they needed more space,” he says.

In 2017, CSP is set to open the John Bradfield Centre, a $25 million building focused on start-ups that will hold some 500 scientists. The park is solving its space problems by gradually adding floors, replacing single-story buildings with those featuring multiple stories. “We’ll start seeing more stories in buildings in the city, too,” Heigham says.

Extensive building is also taking place on Granta Park a few kilometers south of Cambridge, where the U.S. firms Illumina and Gilead Sciences are both constructing major facilities that are set to open in the next couple of years.

BRC could expand by 25% on the basis of the enquiries it gets from biotech firms looking to move into—or near—the city, Jones says. BRC already has about 60 organizations and close to 1,000 people on campus. Unlike some commercial science parks that mainly seek out mature companies, it is focused on providing facilities—including wet labs—for start-ups as well, Jones adds.

Not only are more technology companies seeking to join the science ecosystem in Cambridge, but many existing firms are growing rapidly and have succeeded in raising large amounts of venture capital to enhance their research programs, Jones says. In the past two years, companies located at BRC have collectively raised more than $600 million from investors. One of them is the monoclonal antibody developer Kymab, which late last month successfully raised $100 million in venture capital funding.

Money is pouring into the medieval town, but its infrastructure—which includes graceful stone spires and narrow cobbled streets—isn’t always able to cope with the rising numbers of workers and residents.

In a bid to overcome transport congestion issues, the science parks are looking to introduce their own solutions. The four campuses of Granta Park, Wellcome Genome Campus, Chesterford Research Park, and BRC have come together to look at ways of easing transportation problems, Jones says.

“We have a ‘last mile’ problem,” Wellcome Trust Sanger Institute’s Ibrahim acknowledges. The Wellcome Genome Campus is considering a radical transport option for its staff and 24,000-plus annual visitors: the construction of its own road and the use of driverless vehicles to connect the campus with public transport.

The city’s capacity to house nonbiotech workers also appears to be under pressure. In a recent interview with Cambridge News, Kevin Price, executive councilor for housing at the Cambridge City Council, said a recent doubling in the number of homeless people in the city could be due to government cuts to welfare support combined with the high cost of living in the city.

Jones, though, rejects the notion that Cambridge and its science parks are so full or that issues such as housing costs and traffic congestion will stall growth. “Ultimately, it is a nice problem to have,” Jones says. “Of course there are challenges, but wouldn’t a lot of cities elsewhere in the U.K. or Europe give their right hand for the challenges that we have in Cambridge?”

“One of my frustrations is that we are in danger of suggesting that Cambridge doesn’t want to grow—which I don’t think is the case,” he says. “There is a lot of traffic congestion, but some of that dies off during the school holidays.” High housing costs are also an issue for London and Oxford—the U.K.’s other two major biotech clusters—he adds.

The real estate squeeze may ease a bit in 2018 when AstraZeneca moves into its new premises and out of myriad temporary offices and labs dotted around the city. “There will be more space,” CBC’s Walker says.

Even with delays, the 3:47 train linking Cambridge to London rolls into the capital in just over an hour. Passengers Fisher and Craig have already made their connections, but others on the train could be heading to dinner meetings in London’s growing biotech hub.

Cambridge’s biotech cluster may be experiencing growing pains, but with Astra­Zeneca and other institutions investing heavily in the city, it now has critical mass that few others in Europe can match. A close connection to London is yet another reason why Cambridge is well positioned to be one of Europe’s preeminent biotech clusters for years to come.