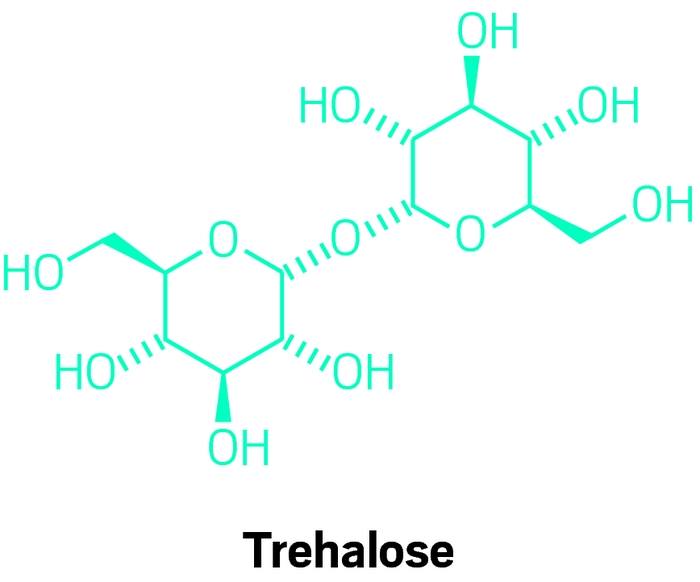 Cells in the body sometimes need a spring cleaning to clear out unwanted or dysfunctional proteins, fats, and other biomolecules cluttering their insides.

The regulated cleaning process cells use is called autophagy. Scientists think compounds that can trigger autophagy could lead to therapeutics for a range of diseases, including diabetes and Alzheimer’s disease, which involve the buildup of malfunctioning molecules in cells.

“There are about 1 billion people walking around the world with nonalcoholic fatty liver disease, whether they know it or not,” says gastroenterologist Brian J. DeBosch of Washington University School of Medicine in St. Louis. People with the disease have excess fat in their livers, which can cause damaging inflammation and possibly lead to liver cancer or even liver failure. Currently the best treatment is diet change and weight loss.

Previous neuroscience studies pointed DeBosch and his colleagues to trehalose—a sugar made by fungi, plants, and insects—as a possible therapeutic for the disease.

Several studies have shown that the disaccharide can trigger autophagy to help neurons clear out aggregated proteins in mouse models of neurodegenerative diseases such as Alzheimer’s and amyotrophic lateral sclerosis. If trehalose could get cells to flush out built-up proteins, DeBosch and his team thought, maybe it would also help eliminate excess fat.

To test the idea, they had a group of mice drink a 3% trehalose solution for two days before putting the rodents on a diet that can induce fatty liver disease. Animals that drank the trehalose-spiked water had significantly lower levels of genetic markers for fatty liver disease, as well as lower amounts of triglycerides and cholesterol in their livers, compared with mice that didn’t consume trehalose.

Through cell culture studies, the researchers determined that trehalose inactivates glucose transporters, proteins that move glucose into cells. With less glucose coming in, cells get tricked into initiating pathways triggered by starvation, including autophagy.

These results have promising therapeutic implications because parts of the pathway trehalose turns on, in particular the activation of an enzyme called AMPK, are also stimulated by metformin, a drug that has been shown to reduce some consequences of fatty liver disease in people, says Rohit Loomba, a gastroenterologist at University of California, San Diego. Loomba thinks the researchers should next see whether trehalose can reduce biomarkers for liver inflammation and scarring, which can contribute to damage in the liver.

And neuroscientists interested in trehalose’s effects in the brain need to determine whether the sugar triggers autogaphy there through the same mechanism as in the liver, says Michel Goedert, a neurobiologist at Cambridge University, who has studied trehalose in a mouse model of Alzheimer’s disease.

The new study offers something all scientists working with trehalose have been looking for: a cellular target, says Claudio Hetz, a researcher at the University of Chile, who showed that trehalose can clear protein aggregates in mice with amyotrophic lateral sclerosis. With this protein target, scientists can possibly design molecules that are more stable and more effective autophagy activators than trehalose, he says.

But DeBosch points out that if trehalose is shown to produce similar effects in people, it would likely be well-tolerated as a therapeutic. In fact, some people already consume it. “If you look on Amazon.com, you can order it today and eat it tomorrow,” DeBosch says.

Comments
David Bradley (February 25, 2016 5:25 AM)
Of course, the intestinal enzyme trehalose and the liver enzyme threhalase will break down trehalose into glucose. For there to be a therapeutic effect of ingesting this compound some has to reach the liver cells intact. De Bosch told Sciencebase that mass spec shows levels in peripheral blood after intestinal and portal circulation might be up to 1 to 5 micromolar...that may well be sufficient.

I still think we're some way from recommending locust or bee's blood for fatty liver disease though...of course you don't have to eat insects to get this sugar. Trehalose is also found in prawns and shiitake mushrooms for a delicious, healthy stirfry.