What’s champagne and how do you preserve its precious fizz? 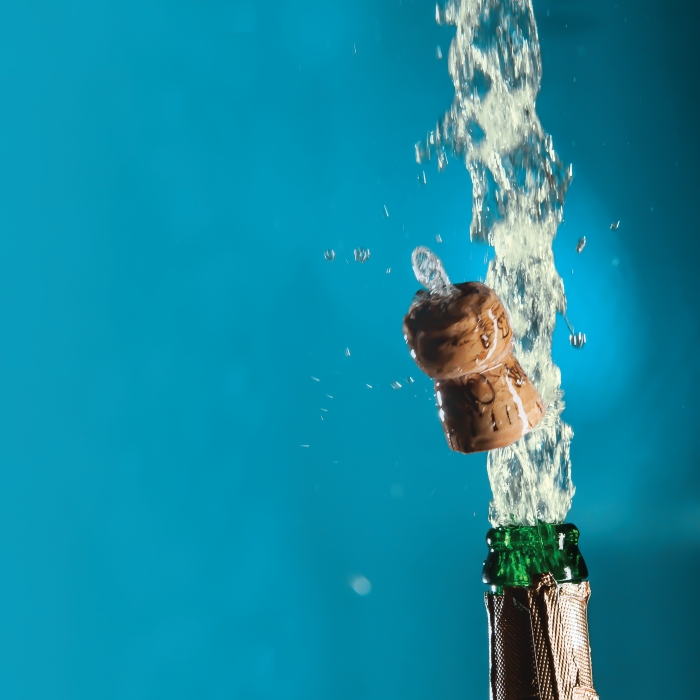 The distinct pop of a champagne bottle being uncorked often punctuates life’s sweetest celebrations—promotions, weddings, ushering in a new year. More than 700 unique chemical compounds give this fizzy festive beverage its characteristic taste and smell. But champagne, also called sparkling wine, has a humble beginning. It is traditionally made “from what we would consider unripe grapes,” explains Andrew L. Waterhouse, a wine chemist at the University of California, Davis. “Those grapes have very little flavor.”

The grapes also have very little sugar, so the wine after one fermentation is extremely tart and contains only about 9% alcohol by volume. To get its hallmark sparkle, beguiling flavor, and to boost its ethanol content, the wine undergoes a second fermentation: Sparkling wine makers add sugar and yeast to the wine, place it in the bottles it will be sold in, and let the yeast turn the sugar into ethanol and carbon dioxide.

Wine makers wait anywhere from two to five years for the wine to age and then remove the excess yeast and sediment through a controlled shaking process known as riddling. This is followed by the disgorging process in which a frozen plug of wine and sediment is removed from the neck of an upturned bottle.

Although current connoisseurs prefer a relatively dry champagne, sugar may have dominated the flavor of 19th-century fizz. In 2015, researchers led by Philippe Jeandet of the University of Reims Champagne-Ardenne analyzed a 170-year-old cache of champagne that had been salvaged from a shipwreck in the Baltic Sea. They found the old champagne’s sugar levels to be spectacularly high—about 15% by weight. By comparison, today’s popular brut champagne contains less than 1% sugar.

A proper pour
[+]Enlarge
Credit: J. Ag. Food Chem.
Infrared thermography reveals that less CO2 escapes when champagne is poured into a tilted glass than an upright one. 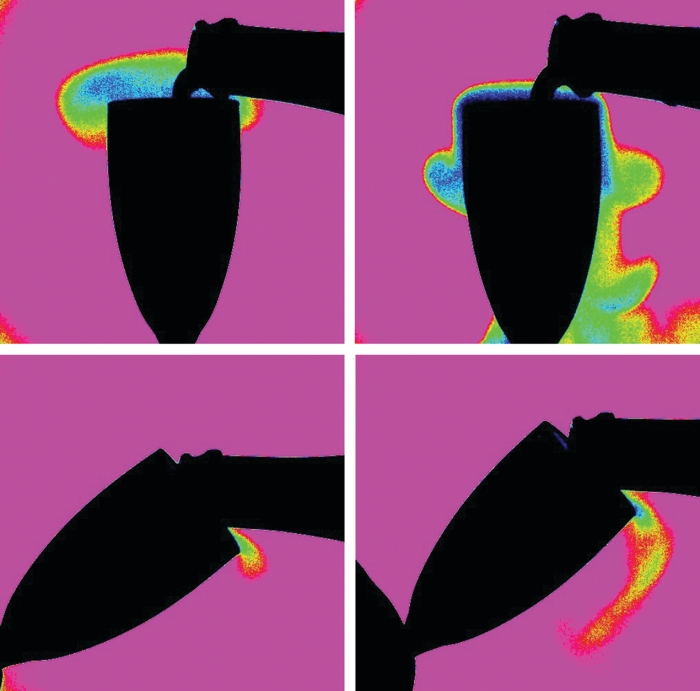 Credit: J. Ag. Food Chem.
Infrared thermography reveals that less CO2 escapes when champagne is poured into a tilted glass than an upright one.

To get an idea of which specific flavor and aroma compounds are released when modern champagne’s bubbles burst, a team of researchers turned to ultrahigh-resolution mass spectrometry to track the beverage’s effervescence in action. Among champagne’s hundreds of compounds, decanoic acid likely gives the drink its toasty aroma, while dodecanoic acid is probably responsible for its dry and metallic notes, explains Gérard Liger-Belair, a chemical physicist at the University of Reims Champagne-​Ardenne, who led the study with Philippe Schmitt-Kopplin, an analytical chemist at the Helmholz Center in Munich.

Champagne may be the elixir of celebration, but for something so closely tied to joyous events, champagne is mercilessly encumbered by laws. In Europe, producers of the fizzy beverage are prohibited from calling it “champagne” unless the grapes were grown in the region of Champagne, an area of more than 33,000 hectares about an hour’s drive northeast of Paris. The so-called “Appellation d’Origine Contrôlée,” or controlled origin appellation, outlines the rules conceived to uphold the quality of Champagne wines. This is what separates true champagne from other sparkling wines made with the same method, the so-called “méthode champenoise.”

From a chemical perspective, though, champagne and all other sparkling wines must conform to just one physical law, Henry’s law: The amount of gas dissolved in a fluid is proportional to the pressure of the gas with which it is in equilibrium. This dissolved gas—CO2 in the case of champagne—gives the wine its characteristic effervescence. In an unopened bottle, CO2 gas dissolved in the wine is in equilibrium with gas in the space between the cork and the liquid. Uncorking the bottle releases this headspace gas and disrupts the equilibrium. Following Henry’s law, the dissolved CO2 leaves the wine via bubbles—about 1 million of them in each glass, according to Liger-Belair—thereby reestablishing the equilibrium through effervescence.

To enjoy that effervescence, it’s crucial to maintain the balance of bubbles in your bubbly. The easiest way to do this is to serve champagne chilled, says Ronald S. Jackson, an author of books about wine making and wine science. “The lower the temperature, the slower the rate at which CO2 will escape, and you’ll have less gushing,” he says. Of course gushing is fine if you’re celebrating a victory in sports, Jackson says, but “if you really like your champagne, you want to have it in the glass.”

The best serving temperature for champagne, according to Liger-Belair, is 8 to 10 °C. “Enough CO2 remains in the liquid phase to promote effervescence during tasting, and the temperature is warm enough to enable the release of volatile organic compounds,” he says.

Liger-Belair also has two other suggestions to enhance the champagne drinking experience. First, on the basis of gas chromatography studies he’s done of the headspace over champagne in various drinking vessels, he recommends serving champagne in a tulip-shaped glass. This allows one to enjoy champagne’s aromas without getting the irritating concentrated whiff of CO2 that can come from the traditional champagne flute’s shape.

He’s also found that pouring champagne into a tilted glass—as you would pour a beer—rather than an upright one helps keep more bubbles in the beverage. “You create less turbulence, so that the loss of dissolved CO2 during pouring is reduced compared with a vertical pour where champagne hits the bottom of the glass,” Liger-Belair explains.

So tilt a chilled tulip-shaped glass of champagne as you celebrate all of the sweet things in life this year.

UPDATE: This article was modified on December 28, 2016 to refresh its information and data.

Comments
Denton Hoyer (December 28, 2016 2:43 PM)
I'll take the recommendations to heart, but I wonder if there is more going on than simple gas-liquid equilibrium. The content of CO2 seems much higher in sparkling wine than selzer; are we not seeing something more like a carbonic acid buffer solution?
Reply »

R. A. Frankel (December 28, 2016 3:52 PM)
Your champagne expert erred in saying one should pour into a tilted glass "like beer". Fact is [you could check with your beer expert] you should POUR BEER RIGHT DOWN THE CENTER OF THE GLASS. The difference has to do with wanting to get the full taste of your beer, not overwhelmed by head [bubbles]. That allows a good part of the gas to escape, and yes, requires waiting a bit until the head subsides. In contrast, champagne doesn't build a head, and so can be drunk while still very bubbly and titillating.
Reply »

Obarakpor Kingsley (December 30, 2016 5:52 AM)
Does ideal gas law apply in this case? The law states that if the volume and temperature of a fixed amount of gas do not change, the pressure also remain constant. In the champagne case, as the temperature of the bottle and its contents remains constant as long as the bottle is sealed, so is the pressure, which can be proved by replacing the cork with a pressure gauge. In bottling technology, the space between the liquid surface and the cork is filled with CO2 gas. The CO2 gas pressure is set higher than atmospheric pressure in the bottling process. When the bottle is shaken displacement of some of the CO2 gases occurs, when some of the CO2 gases dissolve into the liquid, forming bubbles and get attached to the inside of the bottle. Note : no new gas is generated by the shaking process. On opening the bottle the pressure is reduced to atmospheric pressure, causing the volume of the bubbles to increase suddenly. As the bubbles are attached to the bottle, beneath the liquid surface, their rapid expansion expels liquid violently from the bottle. But tapping the sides and bottom of the bottle, no bubbles remain beneath the surface, and the drop in pressure does not force liquid from the bottle when the bottle is opened(Jewett et al, 2008). Is this compatible with the champagne story?
Reply »

Stan (January 3, 2018 7:24 PM)
And why is it that stirring increases the rat of effervescence? Is it simply the Joule effect, I.e. heating of the liquid by dissipation of the mechanical agitation?
Reply »

Bill (January 5, 2018 3:59 AM)
I never cease to be amazed that people get so excited by what is essentially a product of decomposition.
Reply »