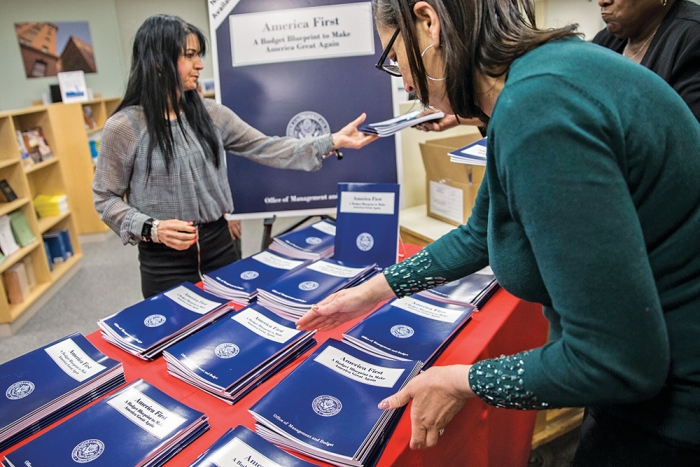 Credit: Shawn Thew/EPA/Newscom
The White House on March 16 unveiled its 2018 fiscal blueprint with cuts to energy, environment, and health programs.

Overall, the White House plan would offset discretionary funding increases for the military, homeland security, and veterans affairs in part with steep cuts to environmental, energy, and health agencies.

In addition, the budget blueprint unveiled on March 16 would restart funding for a nuclear waste repository at Yucca Mountain, Nev., and calls for $120 million to restart licensing of the facility. It also proposes a $1.4 billion increase—an 11% boost—for DOE’s National Nuclear Security Administration to “strengthen the Nation’s nuclear capability.”

In response, the American Chemical Society, which publishes C&EN, called for federal science funding stability. “Sustained, predictable and robust funding is an essential ingredient in boosting our nation’s future in the form of discoveries, processes and knowledge, all of which lead to new products, services, industries and jobs,” says ACS Executive Director and CEO Thomas Connelly.

A detailed budget, which would generally include figures for specific agency programs and tax proposals, will come later in the spring, the White House says. The 2018 fiscal year begins on Oct. 1.

Most science, energy, and environmental agencies would get much less money in fiscal 2018 than they do in fiscal 2017.
Source: White House Office of Management & Budget

In his initial budget request, Trump does not mention the National Science Foundation. The federal agency that funds basic research would receive $7.4 billion in fiscal 2017 if Congress simply extends its 2017 continuing resolution (CR), a stopgap funding law that expires on April 28.

Trump’s budget proposal includes a $5.8 billion, or 18%, cut to the 2017 CR level for the National Institutes of Health. Under the President’s plan, NIH would receive only $25.9 billion, a funding level that hasn’t been seen since the early 2000s.

The biomedical community is dismayed by the proposed reduction for NIH, which would receive $31.7 billion in 2017 if the CR is extended.

In addition, Trump is proposing a major reorganization of NIH’s 27 institutes. The budget plan provides scant details about plans for revamping NIH.

Among the 19 independent agencies that Trump wants to shut down through elimination of funding is CSB, which investigates and aims to prevent chemical-related accidents.

At DOE, Trump would cut the Office of Science by $900 million, a decrease of nearly 17% of its $5.4 billion at the 2017 CR level. The plan would eliminate the department’s Advanced Research Projects Agency-Energy.

The budget proposal would trim EPA funding steeply, reducing the agency’s spending to $5.7 billion, or 31% below the CR level of $8.3 billion. The cuts would eliminate 3,200 jobs in the agency, the White House says.

EPA’s Office of Research & Development would lose nearly half its budget, down to $250 million from $483 million in the CR. The Superfund program for cleanup of hazardous waste sites would receive $762 million, a decrease of $330 million, or 30%, from the CR level.

Comments
Arnie Aistars (March 23, 2017 1:47 AM)
Very unfair to science, which is a terrific discipline and should be supported bigly. Sad!
Reply »