Where has all the sparteine gone?

For decades, (–)-sparteine was a workhorse chemical reagent. The chiral diamine natural product extracted from the seeds of several types of plants had been widely used as a ligand in asymmetric syntheses and as a cocatalyst in ring-opening polymerization reactions. Chemists also studied (–)-sparteine’s potential as a drug.

At first, chemists had trouble buying (–)-sparteine—the supply chain that academic research labs and chemical companies relied on was drying up. Then, the compound was nowhere to be found.

After a drought of several years, the reagent is now available again. However, (–)-sparteine remains sparse. And it’s much more costly than it once was. The bottom line is no one, not even chemical companies that advertise selling it, seems to have an answer as to what happened.

The case of the missing (–)-sparteine might not have the same cachet as a murder in an Agatha Christie novel, but it has turned out to be a good whodunit that has been gnawing on some chemists.

C&EN first learned of the (–)-sparteine shortage from organic chemist Daniel Weix of the University of Rochester. “Although never widely reported, (–)-sparteine disappeared after being one of the most affordable and widely used chiral ligands in organic chemistry for many years,” Weix says.

Weix mentioned the shortage in a recent Organic Letters paper in which his group reported a nickel-catalyzed coupling of primary alkyl bromides with cyclic enones to synthesize silyl enol ethers. (–)-Sparteine was one of only two ligands that led to the desired cross-coupled products, the other being a dibromoterpyridine. Given the (–)-sparteine availability problem, the team opted to optimize the reaction with the terpyridine (Org. Lett. 2017, DOI: 10.1021/acs.orglett.6b03509).

The papers reporting this research have hundreds of citations, Weix says, which makes the disappearance of (–)-sparteine all the more surprising. “I’ve never found out the origin of the problem,” he says. Weix did point C&EN to a few leads to chase down in an attempt to help solve the mystery. 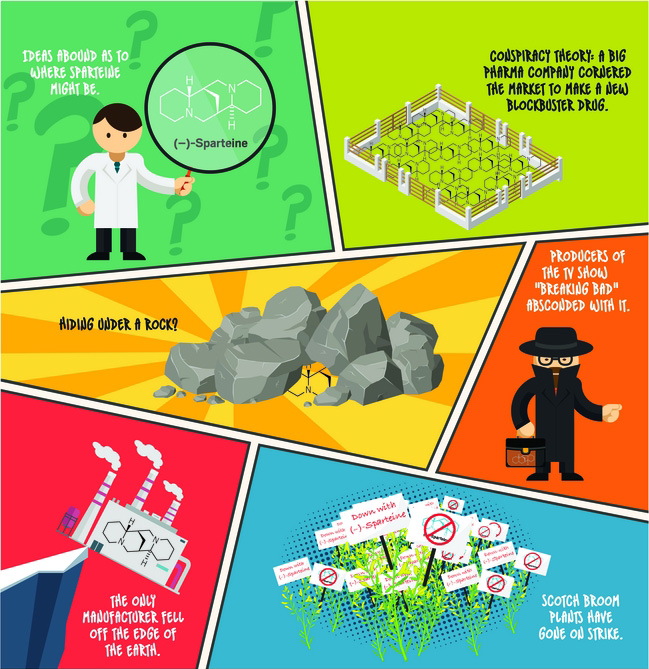 Chemistry Blog contributor Adam M. Azman was one of the first chemists to make public notice of the (–)-sparteine situation. In June 2010, while a graduate student at the University of North Carolina, Chapel Hill, Azman brought up the shortage in one of his posts. At the time, Azman and his lab mates used (–)-sparteine in enantioselective aldol additions. When time came to order more, the researchers found that none of the go-to chemical supply houses had any in stock.

Azman asked if anyone knew what had happened: “Is this all of a sudden, or has this been happening gradually?”

Some commenters speculated that the supply houses might all acquire a chemical such as (–)-sparteine from a single producer. If that producer stopped making it or went out of business, the compound would disappear from the market. One conspiracy theory circulating among chemists suggested that a drug company was moving to scale up the synthesis of an intermediate or a new drug that required (–)-sparteine and bought up all it could find.

Chemists in the comment thread went on to note that this type of supply imbalance is unusual for bulk industrial chemicals but is not unheard of for fine chemicals such as (–)-sparteine. Sometimes publication of a paper describing a novel synthesis or application of a compound can temporarily drive up demand for it. The sudden notoriety could prompt others to run out and order the compound to see what it can do in their hands.

But the compounds rarely go completely missing. For example, the avian flu scare in 2005–06 increased the demand and cost for shikimic acid, the starting material to make the drug oseltamivir, which is the active ingredient in Tamiflu. Shikimic acid is derived from star anise, an Asian fruit. It’s also available from a bacterial fermentation process. In the end, Tamiflu supplies held out, but the crisis prompted chemists to develop new routes to oseltamivir that don’t require shikimic acid.

A few researchers desperately seeking (–)-sparteine have reported ordering the compound on the internet from unnamed sources, but when the chemical arrived and they tried it in a reaction, it didn’t work as hoped. The researchers came to find out the company shipped the (+)-sparteine enantiomer.

Still, bloggers were curious how there could be a (–)-sparteine shortage, given the ubiquity of Scotch broom (Cytisus scoparius), the main plant from which the compound is derived. Scotch broom is a shrub native to Europe, though in recent years it has become an ecologically destructive invasive species around the world, in particular in the Pacific Northwest region.

The blogger Chemjobber wrote: “I can assure you that there are many Oregonians and Washingtonians who’d be willing to sell you some of that infernal weed.” Azman replied that he and his lab mates “joked about growing the plant outside our windows like some people grow their own basil.” But even with Scotch broom taking over the countryside, isolating pure (–)-sparteine from it is not trivial. (–)-Sparteine can also be prepared by various multistep total synthesis approaches. However, it is even harder for a total synthesis to compete on cost against a plant-derived natural product.

Azman is now teaching organic chemistry at Butler University and isn’t heavily involved in research anymore, so he’s no longer ordering (–)-sparteine. And he still doesn’t know what happened. “Sadly, I don’t have any follow-up,” Azman tells C&EN.

So what’s a (–)-sparteine-seeking chemist to do? As the shortage started to sink in, Daniel J. Coady and James L. Hedrick at IBM’s Almaden Research Center decided to look for alternative catalysts to replace (–)-sparteine for ring-opening polymerizations. In late 2011, aided by computer modeling, the IBM researchers identified commercially available tertiary amines with similar structure and reactivity to (–)-sparteine (ACS Macro Lett. 2011, DOI: 10.1021/mz2000048).

Building off Coady and Hedrick’s work, Andrew P. Dove of the University of Warwick discovered that dibenzyl bispidine is another useful structural analog for ring-opening polymerizations (Chem. Sci. 2013, DOI: 10.1039/c2sc22053a).

At the time, a representative for lab chemical supplier Sigma-Aldrich told Dove that the company had bought a batch of (–)-sparteine years before and had been steadily selling it off. Eventually, the supply ran out and the company couldn’t purchase more from anywhere.

“We still have some (–)-sparteine left over from before the drought, but we can’t get more and have stopped trying,” Dove says. “Alternatives for what we do exist, so we just switch tack a little.” Dove adds that he doesn’t really buy in to any conspiracy theories, “but I’ve never found out the origin of the problem.”

Other chemists have looked for alternatives to replace (–)-sparteine’s prowess as a chiral ligand for metals such as lithium and palladium. Peter O’Brien’s group at the University of York previously developed a chiral ligand that would deliver the opposite stereochemical outcome as (–)-sparteine—a cyclic diamine they coined “(+)-sparteine surrogate” (J. Am. Chem. Soc. 2002, DOI: 10.1021/ja027774v; Chem. Commun. 2008, DOI: 10.1039/b711420f).

O’Brien adds that he knows “no more than anyone else seems to” about what happened with (–)-sparteine. He suggests that for those willing to make their own, probably the best approach to accessing (–)- and (+)-sparteine is to use the route from the related compound lupanine described in a patent by Nuno Maulide of the University of Vienna.

[+]Enlarge
(–)-Sparteine’s chemical reactivity is attributed to the twisted conformation of its double quinolizidine ring system, which orients the two amine nitrogen atoms and their lone pair of electrons for metal-ligand binding or for hydrogen bonding.

(–)-Sparteine’s chemical reactivity is attributed to the twisted conformation of its double quinolizidine ring system, which orients the two amine nitrogen atoms and their lone pair of electrons for metal-ligand binding or for hydrogen bonding.

As the (–)-sparteine case developed, C&EN contacted eight chemical suppliers out of dozens that had listed the compound as a product for sale to find out what they might know. The answers only deepened the mystery.

“We did hear about the shortage a few years ago, and we’re not sure what caused it,” says Ephraim S. Honig, chief executive officer of Strem Chemicals, based in Newburyport, Mass. Honig said Strem would look to see if the company could source (–)-sparteine to help make it available to researchers again at a reasonable price.

But after a couple of weeks of checking around, Honig came up empty-handed. “We heard back from a colleague that (–)-sparteine producers in China stopped making it, as it was a complicated production method and they didn’t have a market for it,” Honig says. “But we can’t confirm if that is true. Unfortunately, we have been unable to find a source for (–)-sparteine or any further information on the reasons for the shortage.” Like many of those C&EN reached out to, Honig says: “If we get any further information, we’ll get back to you.”

Victor Lo, sales manager of Atomax Chemicals, based in Shenzhen, China, says his firm has only (+)-sparteine in stock and is out of (–)-sparteine. Atomax supplies lab- and industrial-scale amounts of chemicals to most large pharmaceutical companies around the world. Lo was equally puzzled by the missing (–)-sparteine. In fact, Lo says, it isn’t available anywhere in China. “I do not know who the supplier(s) outside China might be, but I am pretty sure it is not produced in China anymore.”

A few clues in the case of the missing (–)-sparteine did turn up during C&EN’s investigation. The compound has been found in two places: U.S.-based chemical suppliers Sigma-Aldrich and TCI America report having small quantities available. Sigma-Aldrich sales representatives say they have no idea what is happening with the (–)-sparteine supply chain and can’t disclose its source. The company lists (–)-sparteine from $50 per 0.5 g and up, depending on the grade and amount.

At TCI, R&D Manager Sriramurthy Vardhineedi has a bit more to share. In 2011, when TCI recognized the shortage, the company developed a proprietary procedure to produce kilogram quantities of high-purity (–)-sparteine as needed, Vardhineedi says. TCI is possibly the world’s only current commercial producer, he notes. (–)-Sparteine remains in high demand, Vardhineedi adds, but he points out it is expensive. TCI offers the compound at $98 per gram and up, depending on the amount.

As to what happened to the supply after 2010? “We are guessing that some company decided to stop making this valuable chiral alkaloid without realizing they were the sole supplier,” Vardhineedi says.

A SciFinder search for (–)-sparteine reveals how the shortage has affected chemical research. The number of papers published mentioning the compound dropped by half after the shortage, from about 60 per year in 2009 to about 30 per year in 2015; the number edged back up in 2016.

For Rochester’s Weix, he remains perplexed. “I’ve asked around over the years about what happened to (–)-sparteine, and we all still wonder about it,” Weix says. “If it could be plentiful again, that would be a great service to chemistry.”

Comments
David Dodds (April 26, 2017 3:50 PM)
One possibility that is not mentioned is that it was a by-product of some other process, for example, i.e. a side-stream that just happened to occur in the process of extracting some other natural product, and from which it was easily - or even spontaneously - crystallized. Are there any extracts of Cytisus scoparius that have ceased to be marketed - not just a purified chemical, but such things as "botanicals" , homeopathic tinctures, etc?
Reply »

Steve Ritter (April 27, 2017 10:09 AM)
Good question. No one has suggested this to my knowledge, but it seems sparteine is always the main target, not a by-product. Yet the patent by the Maulide group describes deriving sparteine with lupanine, a keto analog https://www.google.com/patents/EP2808326A1?cl=en).
Reply »