Michael Braungart is bullish about the future of fully recyclable products 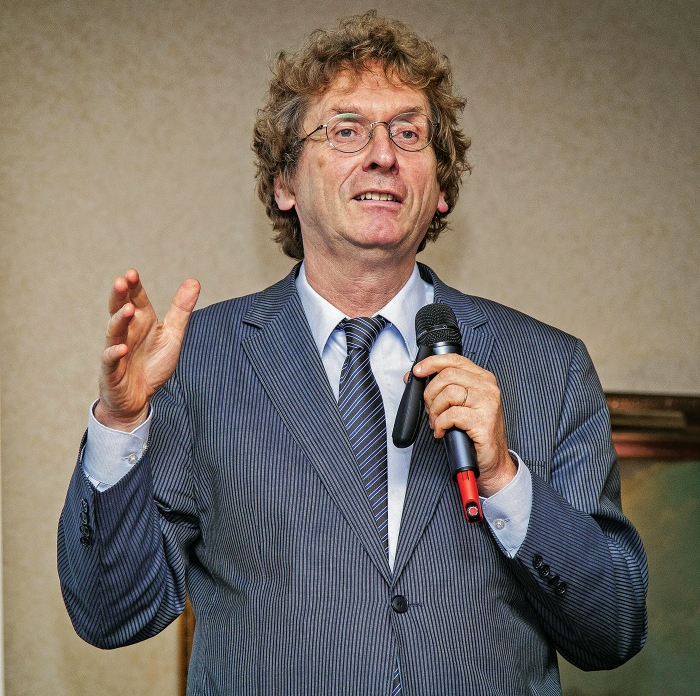 Sometimes-controversial chemist and environmental activist Michael Braungart has a clear picture of the way the chemical industry—and the wider world—should work if it is to be sustainable.

He thinks the billions of dollars spent annually on environmental services companies should be redirected to scientific research, and that chemists should be the ones heading chemical companies. According to Braungart, chemists are best placed to solve global sustainability problems. He’s also convinced that Donald J. Trump is good news for sustainability.

Braungart’s main thesis, though, is that consumer products should be made in such a way that their materials can be readily separated and reused over and over again. It’s an approach he has named Cradle to Cradle, or C2C.

Braungart first promoted C2C in 2002 in a book, “Remaking the Way We Make Things,” that he wrote jointly with celebrated U.S. architect William McDonough. The idea has been a slow burn. Many companies are put off by C2C’s potentially onerous requirements of replacing hazardous raw materials with nonhazardous ones and enabling the recycling of products at the end of their useful life.

But whereas Braungart’s approach was once considered a bit fringe, an increasing number of government agencies and consumer product firms are now seeking him out to help them adopt sustainable production systems. And Braungart is optimistic that a new generation of young chemists, with their enthusiasm for environmental solutions, is bringing the widespread adoption of sustainable manufacturing a step closer.

Throwing back cappuccino and biscotti in a tiny café in London, Braungart is in an ebullient mood as he talks with C&EN. He has just come from advising a global cosmetics firm on sustainable raw material selection. Opportunities for making personal care products sustainable are legion, he says.

These days Braungart is also lifted by society’s growing sense of awareness that chemistry is part of the tool box for a better, more sustainable world. It wasn’t always so.

“Because of chemistry’s reputation after Bhopal, Seveso, and other disasters, we wiped out a generation of the best young chemistry students—they all became bankers,” Braungart says. But in his role as a professor at Erasmus University in Rotterdam, he has seen a shift.

“The banking sector has been behaving so badly that it is now considered a worse profession to go into than the chemical industry,” Braungart says. “More of the brightest students are coming back to chemistry,” he says.

“For the younger generation, self-esteem is more important than money. Just look at today’s selfie culture: Kids are equally proud of what they are doing as making money. So, I am optimistic. The likelihood is that their adoption of C2C will be so much faster,” Braungart enthuses.

One of those opportunities is anthropogenic climate change. Braungart points to the need for sophisticated chemistry-based technologies to not only strip out greenhouse gas emissions at the source but remove CO2 from the atmosphere as well.

Braungart is also optimistic because his C2C ideas are gaining ground, especially in Europe. The Dutch region of Venlo is the first municipality in the world to fully adopt the principles of C2C on a regional scale. Lately, the European Commission has begun advocating the Circular Economy approach, a copycat of C2C, albeit one that is less stringent about limiting the use of hazardous chemicals in recycled material.

Indeed, Braungart insists that hazardous chemicals should be removed before they become environmental problems. Years ago—before estrogen in waste water was shown to adversely affect fish—Braungart suggested to senior executives at Bayer that they should introduce a device for toilets that would destroy estrogen metabolites excreted by women taking the hormone.

“They were amazed. They had never even thought about the problem before,” Braungart says. The highly reactive metabolites can be readily destroyed in toilets using a release of enzymes, he says.

The common practice of treating biodegradable materials with persistent chemicals also rankles Braungart because it increases the amount of hazardous waste generated. Notably, 20 million metric tons of painted wood generated annually around the world is classified as hazardous and discarded, he says.

The problem is that wood paints are not designed with the environment in mind, he says: Paint company chemists have given no thought to what happens when the wood reaches the end of its useful life. Braungart’s solution is to redesign the products from the outset without the use of problematic chemicals.

While Braungart argues that commercial opportunities for fully recyclable products are abundant, he is frustrated that companies—including chemical firms—instead spend a big chunk of their money making poor quality processes more efficient. “If you have got a waste problem from making a product, then it is a low quality product,” he says. Rather than improve the efficiency of that poor process the manufacturer should look to replace it, he argues.

And the $70 billion-per-year environmental services sectors, which includes environmental auditors and reporting agencies, is a major hindrance to change because it helps hazardous waste-generating processes to stay in place, Braungart maintains. “They have the staff, the budgets, and the protocols in place. The money should instead be spent on innovation.”

Another problem is that leading chemical producers and users, such as AkzoNobel, BASF, Bayer, and Unilever, increasingly are run by administrators, not chemists with a keen understanding of innovation, Braungart says. “They don’t truly know what innovations they have. Scientists have to recover these leading positions.” Braungart points to BASF’s 2011 replacement of chemist Juergen Hambrecht as chairman with Kurt Bock, a finance expert with a completely different mindset.

When it comes to world leaders, though, Braungart expects that President Trump will have a bigger impact on sustainability issues than former President Obama. When Obama came to power, everyone interested in the environment leaned back and waited for the government to take action, he says.

“Now they know they can’t wait for the government,” Braungart says of Trump. “Scientists understand it’s up to them to make a change.”

Chemistry in the past has been so pointless that what young chemists are doing will already be 10 times better for the environment.

Although it’s possible Trump could be a catalyst for sustainability, it has already taken more than a decade for C2C just to reach the foothills of adoption. Braungart says this is not an issue for him or his C2C thesis. He is in it for the long haul. “Real changes need time,” he says. “Look at Declaration of Human Rights and the right for women to vote. They took 150 years.”

Economy
How Europe’s chemical industry learned to love REACH
Business
Not-so-fantastic plastic: Europe is ready to shake up the plastics industry to resolve its failure to recycle
Environment
Europe circles the circular economy
Share X
To send an e-mail to multiple recipients, separate e-mail addresses with a comma, semicolon, or both.
Title: Michael Braungart is bullish about the future of fully recyclable products
Author: Alex Scott
Chemical & Engineering News will not share your email address with any other person or company.