For anyone who has ever wanted to share a psychic experience with ants, the opportunity for arthropod communion now awaits you at New York City’s Guggenheim Museum until July 5. There, Anicka Yi’s exhibition “Life Is Cheap” features ants, ant aroma, human body odor, armpit bacteria, agar, and other equally delightful, quirky media. 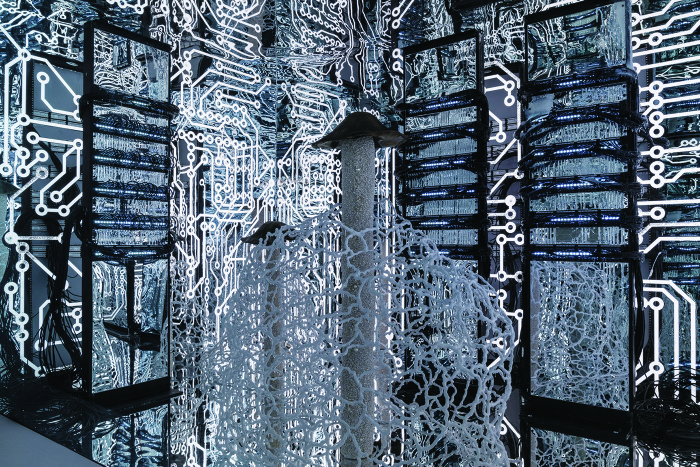 First, you should know that this is art you experience with your nose. When visitors enter the exhibition, canisters spritz scents derived from body odor originating from Asian American women and carpenter ants in a work titled “Immigrant Caucus.” To create the fragrance, Yi sampled the women’s sweat and worked with forensic chemist Kenneth Furton to identify the chemical constituents of the human body odors. Furton, a professor at Florida International University, is a pro at scent detection, although he’s arguably better known for his cadaver odor expertise than for his contemporary art collaborations.

With a list of the women’s sweaty top notes in hand, Yi then worked with a Parisian perfumer to recreate a synthetic interpretation of the armpit aroma and spiked the concoction with smelly chemicals emitted by carpenter ants. Museum visitors move on to experience the rest of the exhibit with the scent of the hybrid aroma top of mind.

Those familiar with Yi’s previous work know that this is par for the course for the artist. She often integrates olfaction, bacteria, technology, and the unexpectedly absurd in to her art. “Sometimes the wall text that hangs beside her work reads more like an alien shopping list than an informational label,” noted the New York Times in February. “Her materials include everything from aquarium gravel to Girl Scout cookies, and for various installations she has fermented kombucha into leather, tempura-fried flowers and injected live snails with oxytocin.” In 2016, her installation “Search Image” featured a taxidermy coyote and hardware.

The current exhibit, which honors Yi’s receipt of the revered Hugo Boss Prize, also features a self-contained biosphere composed of bacteria. The microorganisms are sampled from Manhattan’s Chinatown and Koreatown neighborhoods and are growing in agar, “as if an invasive life force has overrun the environment,” notes a press release.

Another piece, called “Lifestyle Wars,” features ants navigating “a network of pathways that are reflected infinitely across mirrored surfaces, evoking a massive data-processing unit in which their industrious movement embodies the flow of information,” according to the press release.

So what about that psychic mind meld? Yi is drawn to ants partly because much of the insect’s behavior is guided by olfactory cues. “The colony is exposed to the same hybrid scent that fills the entry corridor,” the press release notes, “creating the possibility of a shared psychic experience between ant and human.”