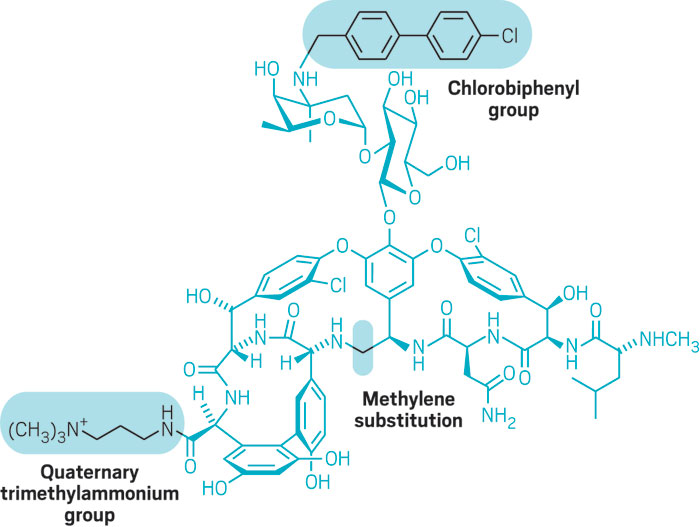 Researchers have created a modified form of the approved antibacterial drug vancomycin (Vancocin) that has three independent mechanisms of action, boosting its potency and minimizing the potential for bacteria to develop resistance to it.

Vancomycin, a bacterial natural product, had long been an antibiotic of last resort because it remained effective against drug-resistant bacteria after other medications stopped working. But bacteria have now evolved defenses against vancomycin, which works by inhibiting transpeptidase, an enzyme that catalyzes a cross-linking reaction bacteria use to build cell walls.

Scientists have recently modified vancomycin in various ways to boost its potency and discourage resistance. In fact, the U.S. Food & Drug Administration recently approved three modified vancomycins: oritavancin, dalbavancin, and telavancin. They are each made by semisynthesis from vancomycin by chemical addition or modification of one or two chemical groups.

Dale L. Boger of Scripps Research Institute and coworkers have now created what could be the ultimate vancomycin by modifying it in three ways (Proc. Natl. Acad. Sci. USA 2017, DOI: 10.1073/pnas.1704125114). The modifications give it three mechanisms of action, optimize its potential to deter bacterial resistance, and boost its potency. It is more than 10,000-fold as potent as vancomycin and about 250-fold as potent as oritavancin against vancomycin-resistant enterococci bacteria. Boger and coworkers believe it is also about 250-fold as potent as dalbavancin and telavancin, but haven’t verified that yet.

One modification, a methylene group substituted for an amide carbonyl that some bacteria have learned to avoid, restores transpeptidase inhibition. Another modification, also present in oritavancin, is an added chlorobiphenyl group that grants the ability to inhibit another bacterial cell-wall biosynthesis step, catalyzed by transglycosylase. The third change, an added quaternary trimethylammonium group, makes the bacterial cell membrane more permeable, compromising microbes’ ability to control their internal environment.

The three revisions increase potency, meaning that doctors could use less of the modified agent per dose. But the methylene substitution is difficult, so making the triply modified vancomycin requires a 30-step total synthesis, which would be difficult to carry out industrially.

The study “combines pretty much everything we know about improving the activity of vancomycin toward drug-resistant cells,” says vancomycin expert Gerry Wright of McMaster University. “By adding all the components known to make it hard for resistance to occur, Boger’s group has crafted perhaps the quintessential glycopeptide antibiotic” for today’s drug-resistant bacteria. The challenge of scaling up the synthesis, even for preclinical and clinical studies, remains to be overcome, Wright adds, although “industrial process chemists can be geniuses in reducing the number of steps in a synthesis.”

Boger agrees that reducing synthetic difficulty “is a problem solvable by the ingenuity of chemistry.” He believes it might be worthwhile to produce triply modified vancomycin at any price for special cases, even by total synthesis, but his group is working to streamline the total synthesis and develop a semisynthesis.

Comments
Steve Ulrey (June 6, 2017 10:48 PM)
Very clever medicinal and impressive synthetic chemistry. The potency seems excellent and the low dose should lessen any toxicological issues.
However, there was no mention of basic toxicology or human clinical studies yet. After multigram to kilogram quantities become available, these studies usually take some years. Then the development of a manufacturing process that delivers at an attractive cost and FDA approval still await. I don't expect to be saved from a superbug by this compound anytime soon.
Reply »