Round two for MOF commercialization 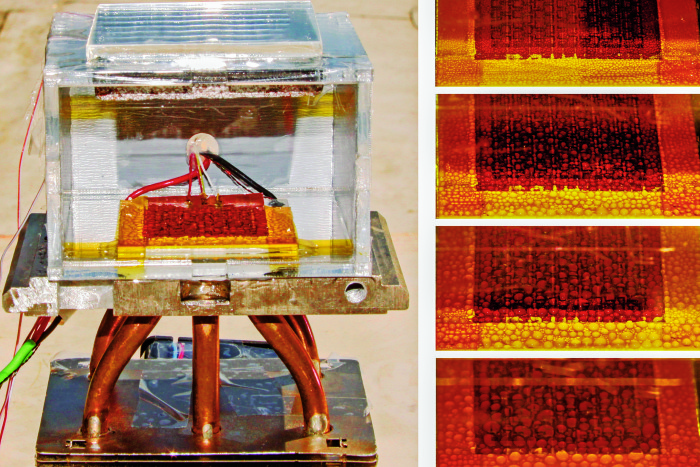 Credit: MIT
A MOF developed jointly by researchers at MIT and UC Berkeley extracts water vapor from air. As shown on the right, water droplets accumulate over time as the temperature inside the container rises from exposure to the sun.

Metal-organic framework (MOF) compounds have the largest surface area of any materials known. Just 1 g of some MOFs can offer a surface area in excess of 2,000 m2. These huge surfaces are potentially useful when gases and liquids need to be captured, stored, or separated. And chemists can design them to be selective about which molecules they absorb.

Given the extraordinary properties they exhibit, it’s no wonder that industrial scientists are intrigued by these crystalline, porous materials.

About a decade ago, a wave of chemical and other companies embarked on major projects to develop MOFs, which consist of metal ions or clusters and organic linkers arranged into nanoscale structures. They were after MOFs that could store hydrogen or natural gas at relatively low pressures to power vehicles. They soon realized, however, that the market for such cars was a distant reality and that MOFs were too expensive even if the application was ready to take off. A mass corporate exit from the field duly followed.

But driven largely by academia, a new generation of MOFs that can perform useful roles in niche markets is emerging. A clutch of start-ups has started offering commercial quantities of MOFs. Academics and major chemical companies are also in the mix. MOFs, once again, are the next big thing.

Belfast, Northern Ireland, is the unlikely starting point for MOFs’ commercial revival. It was in mid-2016 that Queen’s University Belfast spin-off MOF Technologies claimed to be the first company in the world to begin selling commercial volumes of MOFs.

“We can make any MOFs we want, but it’s about making them efficiently using our process,” says Paschal McCloskey, chief executive officer of the five-year-old firm. The company has 12 employees—half of whom are involved in production and half in R&D—and McCloskey expects staffing to rise to about 25 within two years.

Among its commercial products, MOF Technologies sells a MOF that is used by fruit packaging and storage firm Decco in a system for slowing the ripening of fruit with the gas 1-methylcyclopropene. Fruit such as apples and pears produce ethylene as they ripen. 1-Methylcyclopropene released from the MOF binds to ethylene receptors in fruit, slowing the ripening process. “The market is big and growing,” McCloskey says.

MOF Technologies says its manufacturing process is the key to its success. Building on research by Queen’s University inorganic chemistry professor Stuart James, McCloskey’s team has developed a continuous production technology based on extrusion. In it, raw materials for a selected MOF are sent through twin screws. Heat generated during the grinding advances the chemical reactions that create the MOFs.

The approach is solvent-free, scalable, and continuous, McCloskey says, although it does require exacting reaction conditions.

MOF Technologies supplies 10 MOFs commercially. It can make about them at production runs of up to 100 kg and produces a further 15 in quantities of milligrams to hundreds of grams.

Products include an aluminum fumarate MOF with a surface area of more than 900 m2/g. The firm claims the product has extraordinary hydrothermal stability and hydrophilicity, making it suitable for use in heat exchangers and sorption-based heat transformation applications. 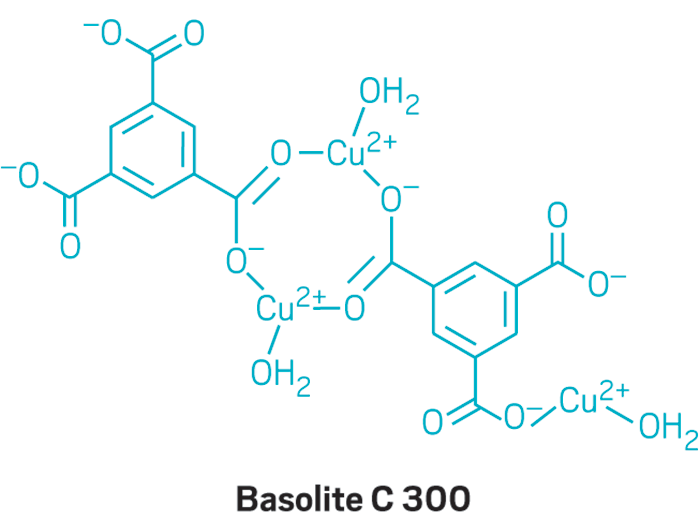 MOF Technologies has raised about $5 million since its founding, close to $2 million of that in recent months. It used a chunk of the money to build production facilities in Belfast. “We have now got a functional industrial production facility to give companies confidence in the scalability of our process,” McCloskey says.

Start-up NuMat Technologies, launched in Skokie, Ill., with technology from the lab of Northwestern University chemistry professor Omar K. Farha, claims to be in the process of negotiating its first commercial supply deal.

NuMat’s know-how is largely in the design of its MOFs and knowledge of the right raw materials and reaction parameters. “Our production process is pretty straightforward. There is no need for specialized equipment to make it,” says Chief Technology Officer Jose Arno. “The key is in the raw materials and the environmental parameters such as temperature so that we get the right structure, yield, and quality. We have a lot of trade secrets on that side.”

The market NuMat wants to crack is storing high-priced gases in the semiconductor industry. To this end it has developed Ion-X, a MOF that enables the storage of toxic gases such as arsine, phosphine, and boron trifluoride, which are used to apply dopants in the manufacture of electronics.

Today these gases are kept in cylinders under high pressure. By filling the cylinders with Ion-X granules, users can store them at much lower pressure, rendering them safe if there is a leak.

NuMat has selected a toll manufacturer able to produce Ion-X, a granular combination of two MOFs, in volumes of hundreds of kilograms, Arno says.

Although Arno won’t share the price of NuMat’s product, he acknowledges that MOF costs, while lower than they were 10 years ago, are not low enough to open commodity-type applications. “We need to be better for high-volume products,” he says.

NuMat has 21 employees, half of whom are in R&D. The firm’s goal is to double its staff, mainly in manufacturing, engineering, and marketing, in the next year. “And in two years I wouldn’t be surprised if we add another 15–20 staff,” Arno says.

The company already has a string of R&D collaborations with leading industrial gas producers, including Linde. “We did some brainstorming with Linde on electronic gases and absorption applications for MOFs and selected the most promising projects. We are now working on them,” Arno says.

For its part, Linde is targeting a development time for the projects—from research to commercialization—of no more than two to three years, says Carl Jackson, head of technology and innovation for Linde Electronics.

“Our joint efforts with NuMat mean that the applications and speed to market is a different animal compared to the industrial application of five to 10 years ago,” he says. “I don’t know if we are ahead of the competition in this field, but from the point of view of our industry peers I don’t see a lot else happening.”

Start-ups such as NuMat and MOF Technologies appear to have outpaced major gas and chemical companies when it comes to commercializing MOFs, but the big beast casting a shadow across the sector is BASF.

The German giant began researching MOFs a decade or so ago. And unlike companies pursuing gas storage, BASF didn’t bail out when commercialization efforts waned but rather refocused its efforts on higher-value fields, including specialty chemical applications.

Today, BASF holds 2.5% of all patents associated with MOFs, more than any other organization, according to CAS, a division of the American Chemical Society. BASF is also the only organization among the top 10 MOF patent holders that is not a Chinese university. Other major patent holders include UOP, which has patents relating mostly to MOFs for fluid catalytic cracking processes.

BASF has produced about 100 types of MOFs at lab scale via a collaboration with University of California, Berkeley, chemistry professor Omar Yaghi. “The largest surface area we have observed in lab samples is about 10,000 m2/g,” says Ulrich Mueller, senior vice president and executive expert in zeolite catalysis at BASF.

The company is already selling some MOFs in small volumes via Merck KGaA subsidiary Sigma-Aldrich, including Basolite C 300, a copper benzene-1,3,5-tricarboxylate with a surface area of 1,500–2,100 m2/g. Merck is offering 500 g of Basolite C 300 for $9,200. Potential applications include the separation of C5 olefins from paraffins in steam crackers.

BASF is also developing MOFs that might help solve global challenges. “We have research activities on MOFs for water harvesting,” Mueller says.

Water harvesting is also a focus of a research pact between Yaghi’s Berkeley lab and scientists from Massachusetts Institute of Technology. In the past few months, the researchers have completed successful proof-of-concept tests on a MOF that extracts water vapor from air. Powered only by the heat of the sun, the system has potential for use even in arid areas, they say.

“One vision for the future is to have water off-grid,” Yaghi says.

To date, scientists around the world have made more than 20,000 MOFs and identified many potential commercial applications. Companies are well aware that the MOF sector has already experienced one false dawn and are firmly focused on niche applications that offer near-term profits. But with production costs easing and the number of potential applications rising, larger-volume opportunities may not be far away.

CORRECTION: This story was updated on Feb. 7, 2018, to correctly represent the surface area of metal-organic frameworks. It can exceed 2,000 m2 per g, not 2 km2 per g.