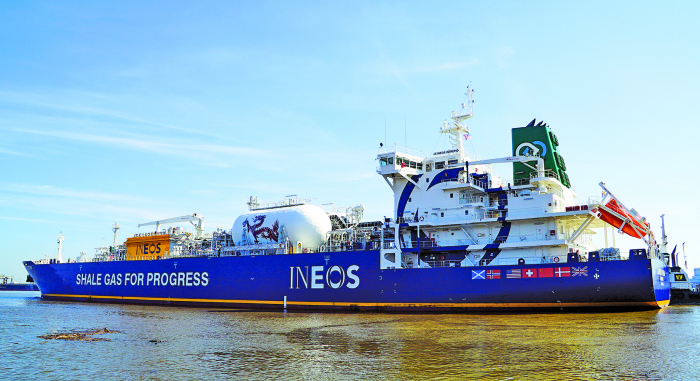 Credit: Ineos
Ineos’s planned expansion in Europe is supported by the firm’s fleet of ships importing low-cost ethane from the U.S.A photo of a ship to supply U.S. ethane to Ineos’s plants in Europe.

Ineos has unveiled plans to expand its European petrochemical business by increasing ethylene capacity at its two crackers and building a new propylene plant. Following plans by Borealis and Dow Chemical to increase their European presence, the project indicates renewed confidence in the Continent as a petrochemical hub.

Ineos is considering sites across Europe, including Antwerp, Belgium, for a 750,000-metric-ton-per-year propylene plant based on propane dehydrogenation technology.

Additionally, the firm is planning a total increase in capacity at its ethylene crackers in Grangemouth, Scotland, and Rafnes, Norway, of up to 900,000 metric tons per year. “Collectively, it’s the equivalent of building a new world-scale cracker in Europe,” says Jim Ratcliffe, Ineos’s founder and chair.

Ineos currently produces nearly 4.5 million metric tons of ethylene and propylene across Europe, but it remains the largest buyer of the two feedstock chemicals in the region.

“These expansions and new builds will increase our self-sufficiency in all key olefin products and give further support to our derivative businesses and polymer plants in Europe,” says Gerd Franken, CEO of Ineos Olefins & Polymers Europe.

Ineos’s planned expansion is facilitated by low-cost ethane sourced from shale deposits in the U.S., the firm says. In the past few years, Ineos has invested about $2 billion in ships that carry ethane across the Atlantic to Europe.

“All our assets will benefit from our capability to import competitive raw materials from the U.S. and the rest of the world,” Franken says.

Indeed, prospects for the European chemical industry are brightening, according to a recent report from Moncef Hadhri, chief economist for Cefic, Europe’s largest chemical industry group. Last month, European chemical production reached its highest level in eight years, the result of rising demand from the construction sector and other industries. Chemical prices are also above the previous year’s level for the first time in four years, Hadhri reports.

Borealis disclosed last fall that it was conducting a feasibility study for a propane dehydrogenation plant in Kallo, Belgium, and that it would make a decision on the investment by this month. Borealis tells C&EN that the study “is still ongoing.” Mirroring Ineos’s strategy, Borealis has established contracts to bring ethane from the U.S. to its ethylene cracker in Sweden.

Dow is also expanding its European petrochemical capacity. The firm said last month that it will build a 450,000-metric-ton-per-year polyolefins plant in the region to serve the high-pressure pipe market. The Dow facility will be the first new polyolefins plant Western Europe has seen since the late 2000s.

Comments
Tom Pendergast (June 16, 2017 12:38 PM)
"Ineos currently produces nearly 4.5 million metric tons of ethylene and propylene across Europe, but it remains the largest buyer of the two feedstock chemicals in the region."
Did you mean to say that ethane and propane are the feedstocks rather thn ethylene and propylene?
Reply »

alex scott (June 19, 2017 9:53 AM)
Hi Tom, Many thanks for your question. It is accurate as stated, Ineos is the biggest producer of these materials and also the biggest buyer as well.
best
Alex
Reply »