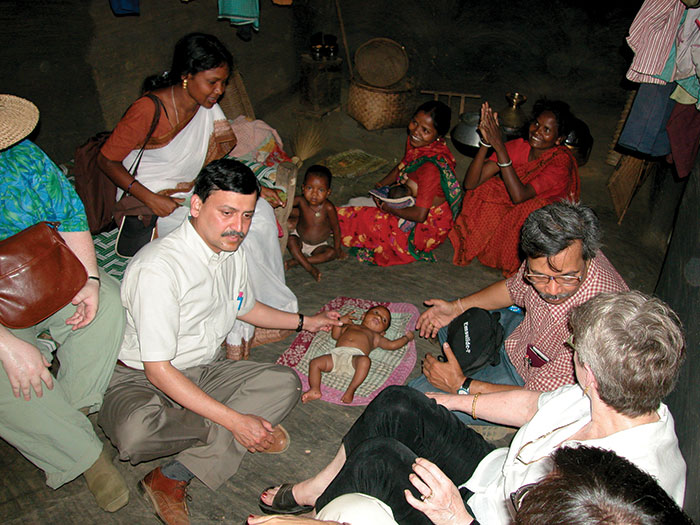 A little more than 40% of the children who die worldwide every year are less than a month old, according to the World Health Organization. And the majority of those deaths are in developing countries.

That makes neonatal mortality a big deal, says Pinaki Panigrahi of the University of Nebraska Medical Center. If you focus on the risks in the first couple months of a child’s life, you can address much of the child mortality problem in the developing world, he says.

Panigrahi and his colleagues now report a possible way to tackle the leading cause of neonatal deaths: sepsis, an inflammatory condition triggered by a blood infection. The combination of a probiotic bacterium and a prebiotic sugar can prevent sepsis, according to a trial the researchers ran involving more than 4,500 infants in rural India (Nature 2017, DOI: 10.1038/nature23480).

Currently, there are only a handful of known ways to lower the risk of sepsis in infants in the developing world, says Daniel J. Tancredi, a pediatrics health researcher at the University of California, Davis, who was not involved in the study. These practices include preventing and treating infections in the mother and early initiation of breastfeeding, he says.

“If we can add another intervention to the mix that can provide additional protection, we can make better progress in cutting down the incidence of disease and death from infection,” Tancredi says.

The new study is the culmination of 20 years of research for Panigrahi. Through that research, he and his colleagues have observed that pathogenic bacteria can invade infants’ intestines and from there move into their bloodstreams, leading to sepsis.

So the researchers started looking for beneficial bacteria that could colonize infants’ guts and push out the pathogenic strains. Through screens of 200 bacterial strains in cell culture and in rabbits, the scientists previously determined that

In the new study, Panigrahi’s team went to 149 villages in rural India and gave infants either a placebo or a combination of L. plantarumand a sugar called fructooligosaccharide. The sugar helps

The researchers followed each infant for two months and recorded the number of sepsis cases. Infants receiving the probiotic-sugar combo had 40% fewer cases of sepsis and death than those getting the placebo.

The reduction was so great that the trial ended early, Tancredi notes in a perspective accompanying the study. When the difference in outcomes between placebo and experimental groups in clinical trials are large, oversight boards will often end the study because it’s no longer ethical to continue adding new participants to the placebo group.

Panigrahi thinks the benefits of preventing sepsis and other infections in infants extend beyond reducing neonatal mortality. A child who gets a serious infection or dysfunction in the gut in the first two years of life can have lingering health effects, such as stunted growth and impaired cognitive function.

As a result, he says, preventing sepsis could improve the overall health of children in the developing world.

Microbiome
Lactose-munching gut bacteria fuel problems after bone marrow transplants
Microbiome
Patients given probiotics in the ICU get more blood infections
Microbiome
A metabolite from gut microbes seems to make ALS less severe in mice
Share X
To send an e-mail to multiple recipients, separate e-mail addresses with a comma, semicolon, or both.
Title: Probiotic prevents sepsis in infants
Author: Michael Torrice
Chemical & Engineering News will not share your email address with any other person or company.