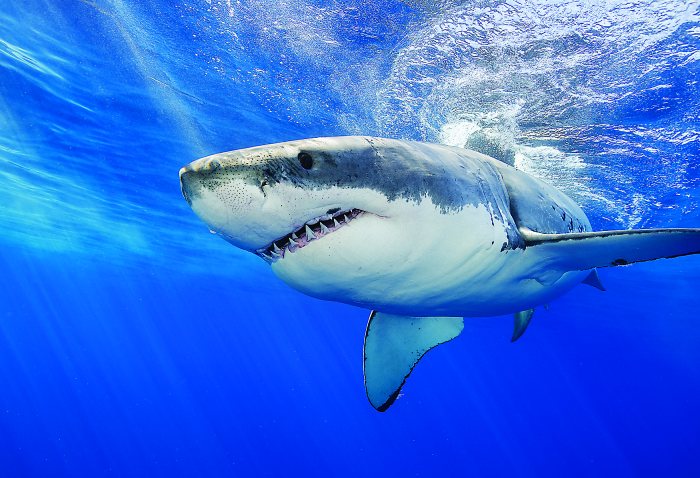 Credit: Shutterstock
Shark sniff: Chemical repellents work on coastal sharks but not yet on a great white like this one.

By day, Eric Stroud was a research chemist for Pfizer and, later, a pharmaceutical industry consultant. But at night, he would hunker down in his New Jersey basement around children’s plastic swimming pools filled with small sharks, pursuing his real passion: chemical shark repellents.

Pharma “paid the bills while I indulged in this hobby, which became a small, part-time business. Then it became a full-time business,” remembers Stroud, cofounder of shark repellent developer SharkDefense.

His obsession started in 2001 on a cruise, when Stroud’s wife innocently asked him why there wasn’t a repellent for sharks. That led him down a rabbit hole of research into the long, unsuccessful history of chemical shark repellents. Stroud was especially interested in the idea that there is a chemical signal from dead sharks that repels live ones.

In reports that date as far back as the 1700s, fishermen have hung dead sharks on their boats, he says. In the 1940s, the U.S. military investigated dead sharks as well, before veering off in another research direction. Several individual scientists in the 1980s and early 1990s looked into the idea. But no work had been published in a decade when Stroud began his research.

After observing small sharks in his basement pools for a few months, two of them died. “I saved them and put them into alcohol,” he tells Newscripts. That alcohol was the best shark repellent Stroud tried, both in tanks and in the ocean. Stroud was so consumed by his shark repellent idea that he went back to school to get a Ph.D. at nearby Seton Hall University. There he used time-of-flight mass spectrometry and other techniques to look at what compounds might be repelling live sharks.

SharkDefense eventually won several federal grants, was awarded several patents, and expanded to employ more scientists. And the alcohol that preserved those dead sharks in his basement became the basis for his company’s successful shark-repellent products.

“It doesn’t smell nice, but it works like a charm,” he says.

SharkDefense licenses its dead-shark extracts to several companies, which sell the chemical shark repellent in aerosol or gel cans that worried sailors can deploy whenever they see a shark nearby.

The company has successfully tested its repellent on 20 species of coastal sharks that cause the most trouble for commercial and recreational fishermen and people conducting rescue operations.

What it still hasn’t repelled are great white sharks. That project will have to wait, though. Its main shark decomposition facility is in Key West, Fla., which was hit hard by Hurricane Irma earlier this month.

“Once we recover in the Keys, we’ll be back on the great white shark project,” he says. And if a chemical repellent doesn’t work, Stroud has some ideas for electrochemical repellents that might do the job. 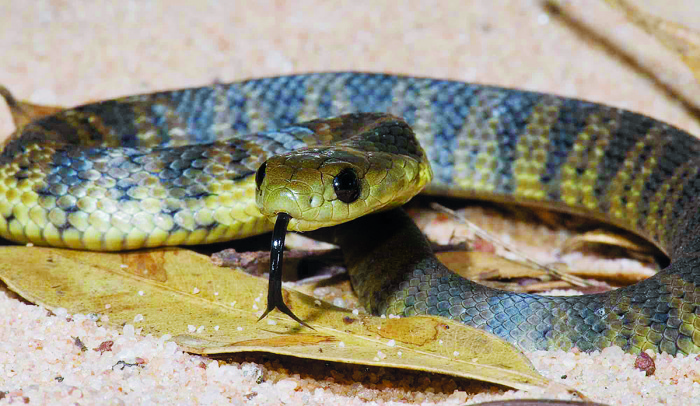 Credit: Stewart Macdonald
Static snake venom: No change in millions of years means this antivenom works for many bites.

So far there isn’t a snake repellent either. But for those unlucky few who get bitten by a snake in Australia, biochemist Bryan Fry from the University of Queensland has good news: One antivenom works for many Australian snakes.

Conventional wisdom says snake venom varies with a snake’s diet, so the same antivenom often can’t be used on snakebites from different regions. But Fry found that’s not true for tiger snakes and their long-lost relatives, which evolved separately for 10 million years but retained the same target—a very important pathway in blood clotting that crosses almost all species.

Tiger snakes and their distant relatives are responsible for many of the snakebites in Australia. Fry’s recent research into their venom demonstrates why antivenom that’s good for one species is also good for its distant relatives (Comp. Biochem. Physiol., Part C: Toxicol. Pharmacol. 2017, DOI: 10.1016/j.cbpc.2017.07.005).

“No other antivenom in the world is so spectacularly effective against such a wide range of snakes this way, and now we know why,” Fry says.

Chemical Communication
Stinkfrucht in Schweinfurt and sniffer dogs on the scent of SARS-CoV-2
Biological Chemistry
Collaborating creatures
Biological Chemistry
Sniffing out a new antibiotic
Share X
To send an e-mail to multiple recipients, separate e-mail addresses with a comma, semicolon, or both.
Title: Decay as a defense against sharks and venom evolution in Australian snakes
Author: Andrea Widener
Chemical & Engineering News will not share your email address with any other person or company.

Comments
Matthew (October 4, 2017 11:37 PM)
Can someone provide a link to the company that sells their chemical repellent?
Reply »