Ben L. Feringa reflects on his first year as a Nobel laureate 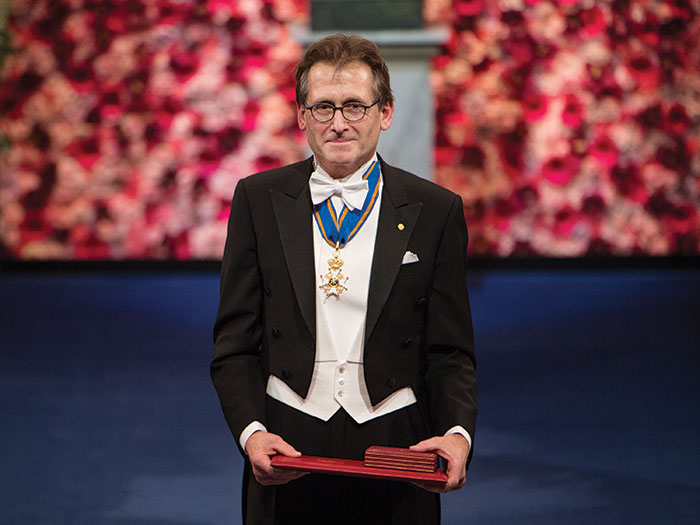 Inside every cell on Earth, molecular machines are hard at work. For example, the protein kinesin acts as a molecular motor to move cargo out of the nucleus along microtubules, and actin generates forces that help cells move and contract during cell division.

Hometown: ﻿Near Groningen, the Netherlands

Advice to students: ﻿“Always look for a challenge and find teachers who challenge you. Persevere, follow your intuition and your dream—but walk on two feet.”

Since the 1970s, scientists have been challenging themselves to create synthetic molecular machines. But it wasn’t until 1999 that Ben L. Feringa made the first molecular motor that could spin in one direction. His findings have opened the door to a series of developments for nanorobots with potential applications including self-repairing paints and the transportation and delivery of drugs. His breakthrough earned him a one-third share of the 2016 Nobel Prize in Chemistry.

C&EN met Feringa at the annual summer meeting of Nobel laureates in Lindau, Germany, where he shared his scientific insights with hundreds of young scientists. In and out of the Lindau lecture hall he was full of ideas and energy, explaining how he wanted to use his laureate status to promote science. He also aired his concerns about environmental problems and his sense of responsibility to galvanize both scientists and politicians to solve them.

“My life has certainly changed,” Feringa said, reflecting on the past year. “After I got the Nobel Prize I received a flood of invitations and requests.” These opportunities to communicate with policy-makers and the public about science haven’t abated. His newfound status means he is being pulled in more directions than ever before. His agenda is filled for the next year and a half. Nevertheless, he has the air of a man who is really enjoying himself.

Most satisfying for Feringa has been the reaction to his award from people living in the northern reaches of the Netherlands, where Feringa spent his childhood and still works today.

“Not many laureates come from northern Holland,” he said. But local people from beyond the science community are very proud and have become engaged with the idea that a local can be a Nobel laureate. They are beginning to realize that to be a Nobel laureate you don’t need to be from Harvard, he said.

Feringa tries to visit one local school each month so that he can share his enthusiasm for science and encourage a few more would-be scientists to take up a laboratory-based career. The spontaneous and positive reaction to his Nobel Prize from children shows their innate interest in science. This has been a “real eye-opener,” he said.

He has also been discussing key scientific issues with politicians in the Dutch parliament. “As scientists, there is an enormous duty on us all to explain why science is so important, how the scientific process works, why we need to invest in its future, how we are going to solve serious problems, and how we learn from scientific failures,” he said.

Despite all this work outside the lab, Feringa has a series of exciting research projects ahead of him.

“One of my real dreams is to continue working on molecular motors because there are so many fantastic things to be done,” he said. He envisions molecular machines that work together to form synthetic muscles that can move something on a surface or enable materials to adapt to changing conditions. “We are starting to see the first plastics that contract and expand,” he said. “But this is just the start of making materials that can do things in a dynamic way.”

Self-repairing paints will likely be one of the first applications for molecular motors and could emerge in 10–15 years, he said. Scratches on a paint surface could activate molecules via light or reactions with oxygen, enabling the motors within the paint to initiate polymerization and repair itself.

Feringa constructed his first molecular motors using overcrowded alkenes locked together via isomerizable double bonds. He could turn the unidirectional motors on and off by alternating between flashing them with light and heating the molecules. While initial models featured slow rotation rates, more recent generations of Feringa’s machines can spin 12 million times per second.

In the past few months, Feringa and colleagues published research detailing a molecular motor coupled to a rotor, in which movements of the two components move in synchronicity (Science 2017, DOI: 10.1126/science.aam8808). “There were many fundamental problems to solve, but it was a beautiful journey,” he said.

Feringa has also doped a liquid-crystal film with molecular motors. As the motors rotate, they disturb the liquid crystal, causing it to change color. This demonstrated that molecular machines could create visible macroscopic changes to a material.

Beyond molecular motors, Feringa is also keen to research the origin of life. “Arguably, the most important scientific question is ‘Where are we from?’ ” he said. This could be answered in part by understanding how biomolecules’ preference for certain chiralities arose.

Feringa’s future studies will also tackle sustainability. Chemical solutions for climate change, pollution, and the challenges of population growth will become increasingly important, Feringa claims. “We almost need a new industrial revolution to cope with it,” he said.

Among the solutions chemists could contribute to, Feringa said, are better batteries and ways to convert carbon dioxide or nitrogen to chemicals of value. He’d like to see industrial processes, such as the Haber-Bosch process for making ammonia, become more efficient and use less energy. And then there are serious issues with resource management. For example, in 20–30 years, there could be a phosphate shortage as people mine it and use it to fertilize crops. “We should take up this kind of challenge,” he said.

Feringa intends to use his position to drive home this environmental message while continuing to work on his lab research. “I enjoy the beauty of the molecular world. I didn’t change much. I teach. I research.”

Career Tips
Zoomed out? Here’s how to manage expectations
Careers
Career Ladder: Joyce Nethery
Postdocs
Postdocs ponder missed opportunities caused by the coronavirus pandemic
Share X
To send an e-mail to multiple recipients, separate e-mail addresses with a comma, semicolon, or both.
Title: Ben L. Feringa reflects on his first year as a Nobel laureate
Author: Alex Scott
Chemical & Engineering News will not share your email address with any other person or company.

Comments
Qedlin Saltum (September 27, 2017 2:34 AM)
Interesting article illuminating the work and success of a scientist passionately engaged in molecular chemistry and physics that has resulted in a Nobel Prize as well as what seems to a life-long opportunity for enjoyment. While the truth about the origin of life dos not appear to be paramount, given Dr. Feringa's dedication and experience, it will be most interesting to hear the facts related to his assessment of the state of scientific research in the area of the origin of life. Addressing homochirality would be a great start, homopolymerization, cell membrane formation and nucleotide coding hopefully to follow rapidly.
Reply »