The future of sleep and lab fashion

Smells to sleep by 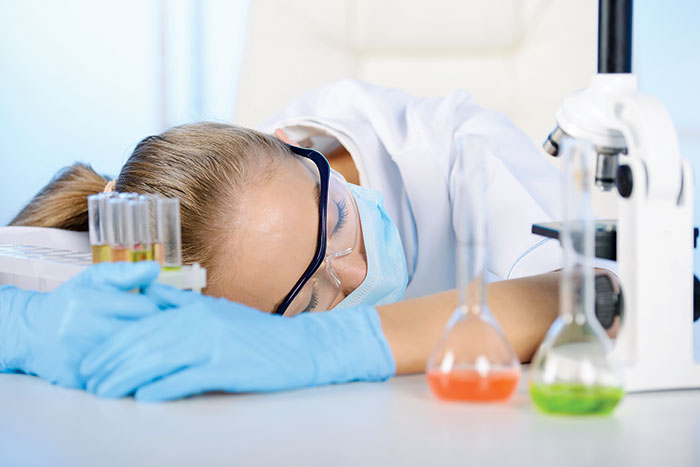 Credit: Shutterstock
Wake-up wear: If DreamScentz puts you to sleep in the lab, perhaps a next-generation lab coat could rouse you.

Come over here so the Newscripts gang can tell you about this really weird dream. Wait, where are you going? Okay, so you don’t want to hear about the long hallway and the giant Erector set, but you may be interested to know that according to scientists, what we smell may influence the quality of our sleep.

It just so happens that the olfactory bulb, the smelling organ behind the eyes that sends odor information to the brain, operates according to its own circadian clock, distinct from the biochemical oscillations that govern the rest of the body. Studies in mice, for example, show their sensitivity to smells “wakes up” at night.

But humans sleep at night—or try to. Actually, most of us sleep poorly. So scientists at the Swiss flavors and fragrance firm Givaudan are developing fragrances they say can help people fall asleep and experience more restful sleep.

John Kontaris is Givaudan’s head of neuroscience research. He’s helping translate the science of sleep for chemists and fragrance experts so they can exploit the connection between our noses and our z’s.

“Recent research would tell you there is a unique entrance way between odors and sleep,” Kontaris tells Newscripts. It might pain scientists to learn that there is evidence backing aromatherapy claims, but ’tis true: Academic researchers have found essential oils such as chamomile, lavender, and valerian can affect sleep-related behavior—and yes, even our dreams.

Givaudan’s goal is to develop proprietary blends of odors to fine-tune the pro-sleep effect. But it’s not possible to perform the same experiments on humans that scientists do on rodents because researchers can’t remove the olfactory organ from a person. Instead, they perform studies in sleep labs where they monitor brain waves.

In a recent patent, Givaudan discloses a bit of the science behind its new fragrance concoctions. Its scientists use electroencephalography (EEG) to measure brain activity in response to smells. The measurements help perfumers select combinations that are, in the patent’s phrasing, “hedonically performant and sophisticated” and associated with improved sleep quality.

The company has developed a formula based on interrelated ratios of alpha-1 and theta brain waves of various frequencies. The output of the formula is appropriately called the Sandman Classifier value of a perfume composition.

On the basis of the data, Givaudan says it can mix potent perfumes from the following categories of ingredients (with amounts in roughly descending order): floral, citrus, fruity, camphoraceous, and animal/leather. To that it adds a dash of balsamic, chocolate, herbal, and other scents. Feeling sleepy yet?

Givaudan plans to offer its DreamScentz line to customers that make all kinds of fragranced products, such as laundry detergent, candles, and household sprays. Kontaris is holding out for perfume that evokes “a huge library with books, including the mahogany of the wood. That is a particularly relaxing smell since it’s where I find myself in my free time.”

Lab coat of the future

The Newscripts gang hopes that chemists working on DreamScentz are able to stay alert in the lab. But perhaps a futuristic lab coat could use new technologies to keep scientists focused and safe.

This month Johnson & Johnson kicks off a contest to design the lab coat of the future, and we know our readers will have some great ideas to contribute.

The contest is part of a celebration of the life of the late Paul Janssen, who was a groundbreaking chemist and pharmacologist. Janssen Pharmaceutica became part of Johnson & Johnson in 1961. The company is inviting scientists to reimagine what a lab coat can be in this age of modern design, textile engineering, and wearable technology.

Given what Newscripts now knows about the intersection of smells and behavior, it stands to reason that a lab coat might waft a concentration-enhancing fragrance to help researchers follow a complicated lab protocol. Or emit a gentle vibration if one’s alpha or theta brain waves suggest sleep is coming on.

How about a lab coat that indicates its wearer’s blood sugar is too low, in time for a quick trip down the hall to the snack machine? Grad students and postdocs might also like a coat that can alert them when their PI has entered the building—though that isn’t technically a safety feature.

Given that the standard-issue lab coat hasn’t changed much since the late 1800s, Newscripts is confident that you’ve got plenty of fresh ideas. So hop on over to pauljanssenaward.com/dpjproject for updates on how to enter the contest.

Education
Pricey, high-tech tools promise innovations in hair and skin care
Biological Chemistry
Periodic graphics: The chemistry of canning
Environment
ACS Meeting News: Aromas could help us eat healthy
Share X
To send an e-mail to multiple recipients, separate e-mail addresses with a comma, semicolon, or both.
Title: The future of sleep and lab fashion
Author: Melody M. Bomgardner
Chemical & Engineering News will not share your email address with any other person or company.